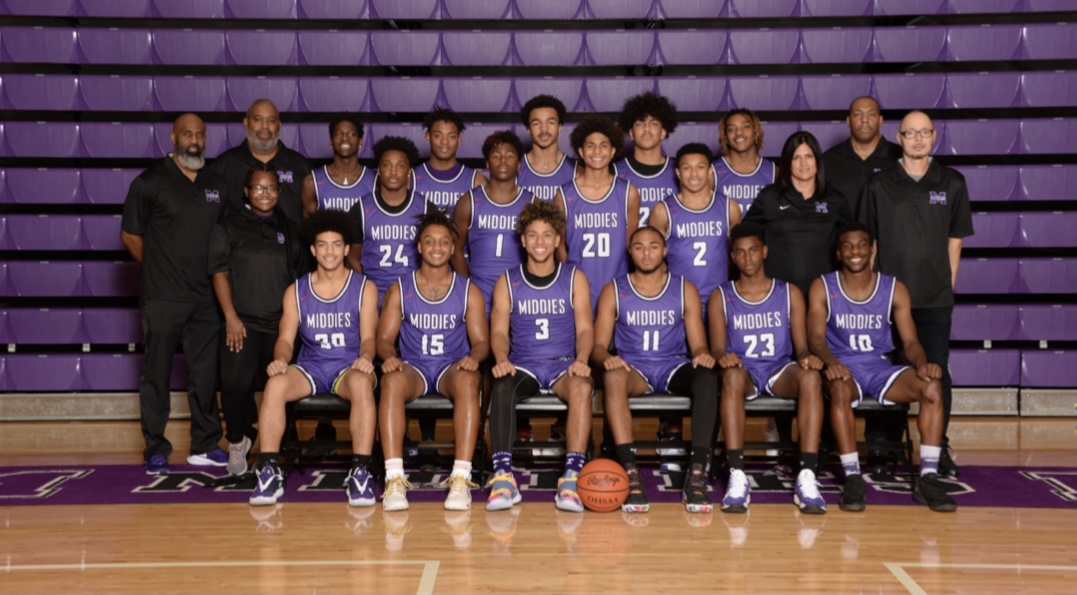 The fifth-year Middletown mentor simply coined it as a replication of how resilient the men in purple are.

“You preach at the beginning of the year that in order to get to this point of the season and to watch it all come to fruition, our guys are going to have to believe,” Hoskins said. “And these guys are believing in everything we’re wanting to do right now. There’s not a more exhilarating feeling.”

And the fashion in which Middletown won its sectional bout against Mount Healthy did feel good.

“It felt really good to see that all play out, man,” said Hoskins, who watched junior Tywan Hall bucket the game-winning score as time expired.

Hall’s lay-in finished him with five points and gave the Middies a sectional final meeting against top-seeded Moeller tonight at 7 p.m. at Lakota West.

“I don’t think we can leave out how we won the game and how we did win it,” Hoskins said. “It was a rollercoaster ride, let me tell you. It sort of portrays how we’ve gotten to this point this season. It really does.

“We didn’t start out the best (on Thursday), but we showed some resiliency in battling back,” Hoskins added. “We gave up some possessions and it probably wasn’t looking too good with under two minutes left to play and down a point.

“But I’ve gotta give my kids a lot of credit. They stayed the course and believed in our gameplan and went out and executed.”

The Middies have indeed performed well as of late, and that’s due in part of their ability to believe in the current system, Hoskins noted.

Middletown is rallying around the fact that its two postseason victories are the most since 2016.

“When you give them something to believe in, you see positive results,” said Hoskins, whose Middies (9-12) have won four out of their last five. “We may not have a world-beater record, but it’s the best record we’ve had since I’ve been here.

“I just told our kids, ‘Our record means nothing right now — especially when you’re prepared at this time of the year.’ I think our preparation has allowed us to be successful recently leading up to this tournament run. The kids are certainly enjoying it and so are we as coaches.”

Leading the way for the Middletown is senior Johrdon Mumford, who averages a team-best 11.7 points and brings down 5 rebounds a contest. Junior Will Williams (9.1 points, 3.8 rebounds), senior Rob Thompson (8.2 points) and Hall (7.6 points, 5.1 rebounds) are also catapulting the Middies through to this point.

“We’ve gotten better, and I’ve felt we have the last three or four weeks of the season,” Hoskins said. “That’s the goal. At least it is for us. It’s a step-by-step implementation process. Early on, I always tell people that the goal is for us to prepare them for this time of the year. We want to be playing our best basketball in February and hopefully into March.

“By now, we’ve got everything implemented, and it’s about how well we’re able to execute it,” Hoskins added. “Our kids are doing a really good job of paying attention to detail on both ends of the floor.”

Hoskins said there is one portion of the game that sticks out the most for his Middies, and that’s defense.

“The defensive end of the floor, I can isolate and pinpoint being the reason for our success night-in and night-out,” Hoskins said. “We sort of live by the motto of if I can stop you more than you can stop me, we will stand a pretty good chance to win or at least be competitive.

“Our kids have certainly bought into the concept that we can defend against anybody,” Hoskins added. “If we can defend them, we can always find a way to manufacture points. If I can lean towards anything that can attribute to our recent success or puts us in a position to have the chance to win games, it’s because we can defend people.

“I’ve preached this — if we can defend, we will have the ability to stay in games. If you look at our record since I’ve gotten here, no one has completely blown us out of the gym. I think you attribute that to our defensive principles will affect us being able to put the ball in the hole.”

“Basketball aside, this is a great group of kids,” Hoskins said. “When I took the job, you could pin it on this group of kids to see whether or not I’d be impactful or not. I’m more proud of these kids for what they’re doing off the court. I’m proud of what they’re doing on the court, obviously. You really couldn’t find a better group of human beings. These are guys who genuinely want to do well and are rooting for one another — just the true epitome of what team means and along with them being solid citizens.”

“The parent group that we have has done a fantastic job of raising these young men, and it makes my job a lot easier,” Hoskins said. “Our kids can take what I’m saying in an angry tone and decipher the message and move forward. They know that what I’m trying to teach them is for the better. They don’t backtalk, and they are in it for one another.”