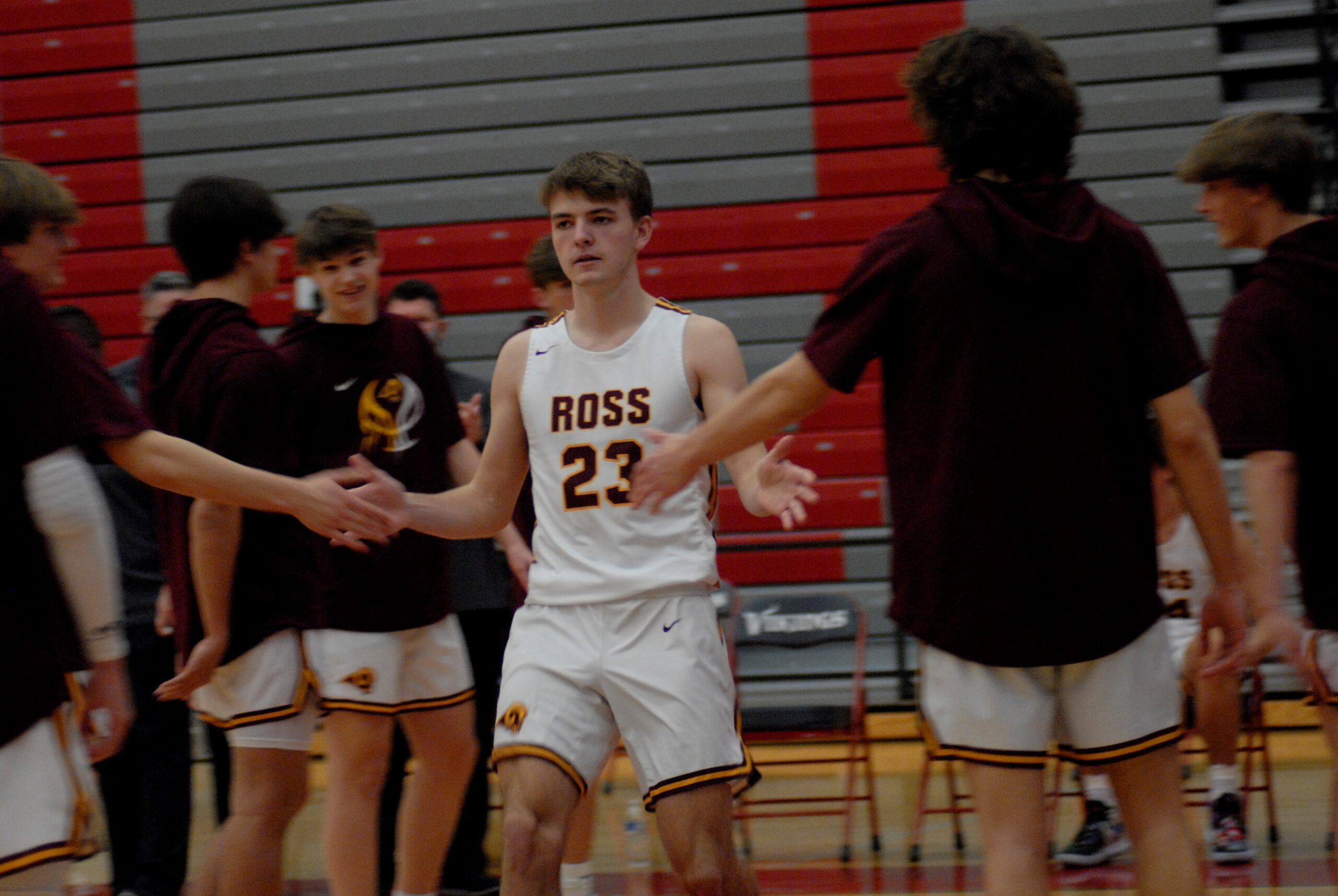 SHARONVILLE — The Ross Rams and the Indian Hill Braves played a classic Division II district semifinal that went down to the wire at Princeton High School on Saturday, with the Braves advancing 48-46.

The game opened up with a great deal of intensity, as these two evenly-matched titans worked long periods of time off of the clock, probing each other’s man-to-man defenses and finding a small handful of outside shots.

Sam Nunn opened the scoring with a 3-pointer, but Indian Hill heated up quickly with Wyatt Wachs immediately answering and Ty Thornton hitting two more deep balls in the first quarter. Indian Hill jumped out to a 13-7 lead, and Thornton continued his scoring barrage in the 2nd quarter.

Ross’s Joe Schottelkotte found himself a few open looks and contributed 8 points in the 2nd quarter after having a scoreless first. Schottelkotte’s 8 helped Ross gain more of a foothold into the game, and Ross went into halftime trailing 27-22.

The Rams were looking for a few halftime adjustments to try to slow down Ty Thornton, who accounted for 18 of Indian Hill’s 27 first-half points on 83 percent shooting. The Braves shot 44 percent from 3-point-range in the first half.

Ross’s halftime adjustments were immediately noticeable, as the Rams hit two quick buckets to start the third — carving the deficit down to a meager 1 point and forcing Indian Hill to burn an early timeout.

Ty Thornton, who scored 18 in the first half, was held to just 2 points in the second half.  Ross center Max Stepaniak found a slight speed advantage in the post against the taller Luc Robinson, snaking his way to six third-quarter points and putting Ross within striking distance. Ross still trailed 36-33 at the end of the third.

C.J. Boze picked up his fourth foul with a minute-and-change left in the third, putting him in a precarious defensive position as the final quarter loomed.

Luc Robinson also picked up his fourth foul very early in quarter No. 4, and just like that, both Ross and Indian Hill had a key player in some serious foul trouble.

Coming out of a timeout, Ross changed to a trapping defense — needing to generate a turnover.  A near-miss of a potential steal left Boze exposed, and he got stuck with his fifth foul — finishing his final basketball game as a Ross Ram with 9 points.  Luc Robinson then scored on the baseline inbounds play to put Ross in its bleakest position, down Boze, and down 44-37.

But the tide turned when Jimmy Booker eagle-eyed a 3-pointer to pull Ross within 4.  This was followed by a Ross steal on the full-court press, and Luc Robinson committing his 5th foul for the Braves.  Sam Nunn hit two free throws, and just like that, the Rams only trailed 44-42 with 1:05 left.

Mateo Lopez hit both ends of a 1-and-1 to surge the lead back to 4, and then Sam Nunn cut the lead back down to 2 with a layup at the other end.  Antwan Peek hit the front end only of his 1-and-1, giving Ross the ball back trailing 47-44.  Sam Nunn again hit a layup, as the Braves were trying their hardest not to foul, which made Indian Hill’s lead 47-46.

Mateo Lopez hit one of two free throws, setting up Ross’s final possession, down 48-46, with 16 seconds left. Sam Nunn drove down the middle, might have had the opportunity to quickly put up a shot, but thought better of it as the tall trees closed in upon him.  With just five seconds left, and in danger of a 3-second violation in the lane, Nunn spun around and located Kellen Reid for a potential game-winning 3-pointer.  It was on-line but just a hair short by the smallest of margins.  The long rebound spun out to Max Stepaniak in the left-hand corner, who tracked it down, putting up a 3-point shot at the buzzer which also drew iron but fell just short.

Indian Hill will advance to play the Tippecanoe Red Devils in the district finals on Saturday, March 6.