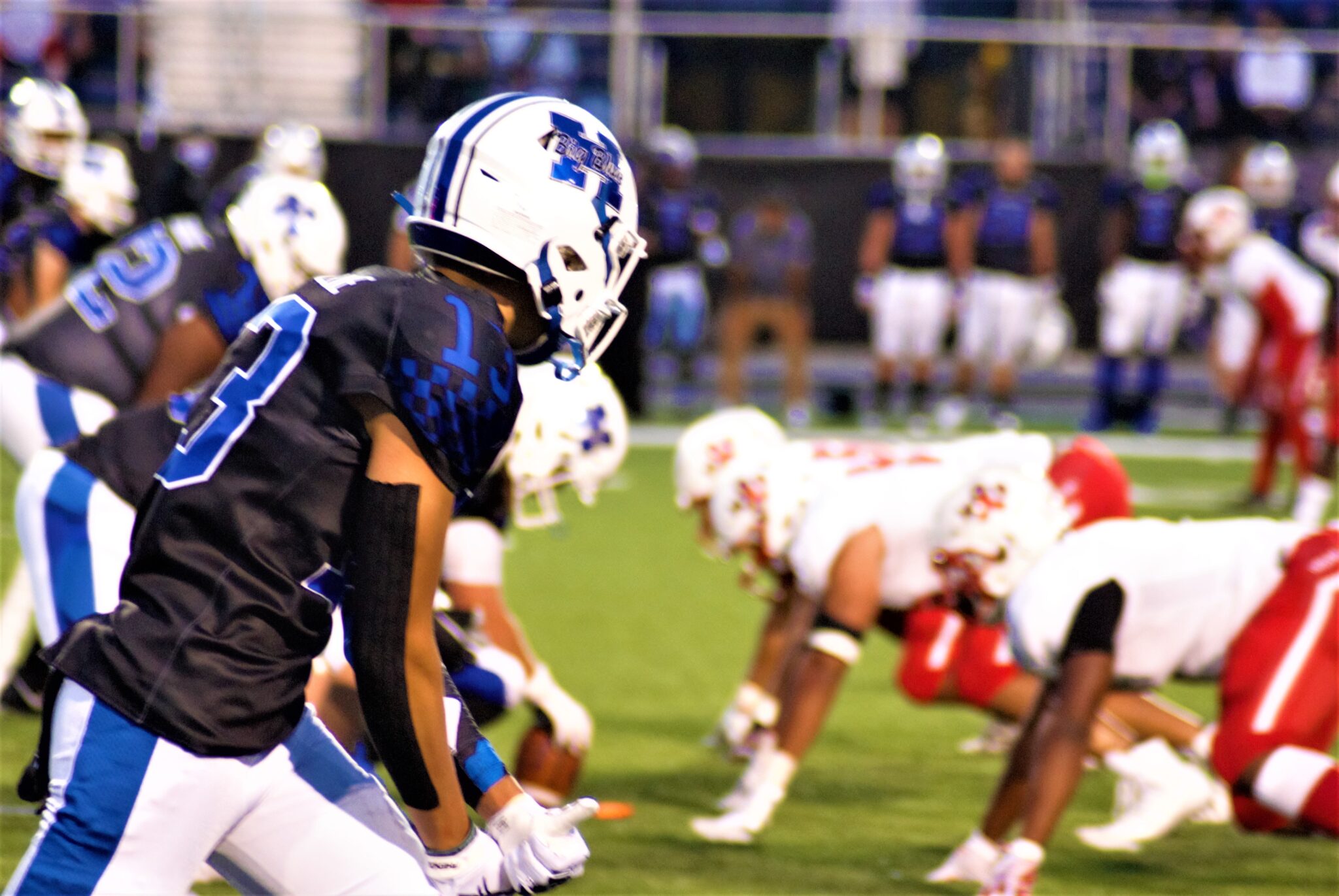 COLERAIN TWP. — In this strange season of uncertainty, there was a completed football season.

Though it only lasted six weeks, we had one, and neither Colerain nor Hamilton were fighting for a playoff spot like in the past. Their spots are automatically secure.

These teams played for pride.

The Cardinals held on to defeat their Greater Miami Conference rival Big Blue 14-13 in a playoff tune-up to close out the regular season.

Both teams struggled to find their rhythm, committing a combined six penalties on the first three drives. A Colerain defender jumped offside on fourth and 2 on a punt, allowing Hamilton to keep possession. The Big Blue had their share of issues with three penalties on their first drive.

“You can’t play that unclean of a game,” Hamilton coach Nate Mahon said.

Added Colerain coach Shawn Cutright, “We’ve got to clean it up. We can’t jump offsides, and we can’t get those pre-snap penalties like we did a little too much.”

The offensive struggles were evident, but this game was not short on defense. Colerain linebacker Terrel Banks recovered Hamilton running back Kaleb Johnson’s fumble at Hamilton’s own 10-yard line.

Two plays later, Cardinals running back MJ Flowers punched the ball in from 5 yards out to give Colerain a 7-0 lead with 10:27 showing on the second quarter clock.

Colerain (4-2) scored its next points off a bad snap that went over the head of Hamilton’s Malik Verdon and into the end zone. Verdon tried to land on it for the safety, but the shook away and Colerain’s Ronald Williams Jr. landed on the ball for the Cardinals touchdown and a 14-0 lead late in the second.

With 1:20 left in the to go in the half, Verdon put his team on his back. The Big Blue (3-3) had the ball on second and 27 at their own 10-yard line. Verdon dropped back to pass and sprints forward, running away from Cardinal defenders for a 48-yard gain.

Verdon’s arm helped the Big Blue, completing two passes two extend the drive in the closing seconds. With two seconds left on the clock, Coach Mahon could have opted for a field goal, but he dialed up a direct snap to running back Keyshawn Stephens for an 8-yard touchdown run to bring it to within 14-7 heading into the half.

Verdon, who ran for a game-high 134 yards, provided more heroics just as he did in last week’s win against Mason. On third and 18, the senior receiver converted quarterback ran 32 yards for a touchdown, putting Big Blue in position to even the score.

Mahon was not interested in going for a tie. Stephens took a direct snap but was stopped short of the goal line with a little over two minutes to go in the game.

“I figured they were their guy,” Cutright said of Stephens and Verdon. “They got No. 8 and No. 3 in the backfield, so we knew one of them would get it. We have to tackle one of them.”

“I will go for two every day of the week giving the ball to No. 8 (Stephens),” Mahon said. “I felt that we were playing with house money, we were trying to move the ball against a very good defense.”

The Big Blue had an opportunity to potentially get the ball back, but it would be a couple of penalties that had plagued them all game that allowed Colerain to take three kneel-downs for the victory.

Jordan Jones rounded up 11 tackles for Hamilton, which is set to host Moeller next week in the first round of the Division I playoffs. Colerain will host Milford.