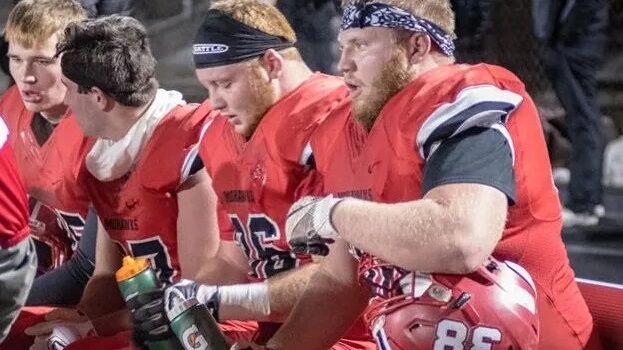 There isn’t a soft spot in Madison High football. And if there was, it had already seen the door.

It’s pretty much put up, or shut up.

“This is a tough group and we’re hard-nosed,” said senior Max Evans, Mohawks defensive lineman. “If there were a bunch of whiners, they were gone in August. We weeded them out.”

Now, it’s November, and Madison is on a quest for a Division V state championship. The Mohawks take on Wheelersburg in the regional finals on Saturday at Hilliard Darby.

“As a defense, we almost take offense to people scoring,” said Evans, a spearhead on a defensive unit that has only allowed a miniscule 4.25 points a game.

“We take pride in having those shutouts,” Evans added. “We take offense to it. I think it brings out that brutality in us. We love seeing that zero on their side of the scoreboard.”

In fact, the opposition hasn’t seen a single notch on the scoreboard in seven of the Mohawks’ 12-straight victories. Madison has only given up 13 points in its last six contests, and Evans vouches that it all starts in the trenches.

“That backs up the personality of our team,” Evans said. “We’re just hard-nosed and we never want to let anyone have an inch on us.

“We’re a rough group, especially on the line. Just a bunch of tough guys,” Evans added. “We’re always excited and we’re always amped. But we’re just a bunch of goofy guys who like to stick it to some teams.”

“The kids are tough,” Poff said. “It starts and ends on the offensive and defensive lines. Those guys make sure things happen. It’s part of their toughness that helps us win games.”