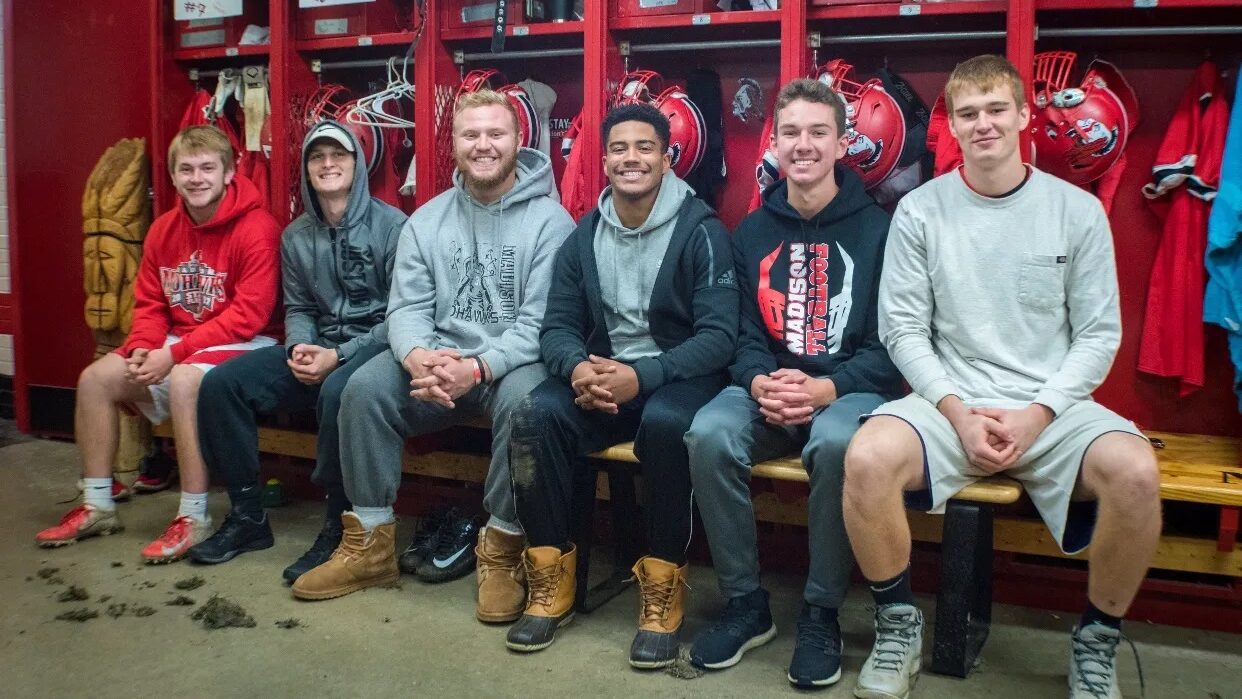 MADISON TWP. — There’s just something special about them. The community knows it, the coaches know it, and even the players themselves know it.

The Madison Mohawks are savoring the high school football season dreams are made of.

“The kids work hard and they’ve got such pure talent,” said Madison coach Steve Poff, whose squad takes 12-0 perfection into a Division V regional final against Wheelersburg on Saturday at Hilliard Darby.

“They’ve got to buy into this and believe,” Poff added. “Their commitment to this whole thing has been great, and the relationships that they’ve built with each other is something special.”

It’s the type of aura that makes the Mohawks exactly that — special. These guys have fun written all over them. Though there’s no denying. Winning has a lot to do with it.

And Madison hasn’t just been winning. The Mohawks have been winning big. Overwhelmingly big.

“We’re not trying to trick anybody either, that’s the thing,” Poff said. “We line up and do the same thing over and over again.”

Using the long-lost Wing-T formation, the Mohawks have an offensive backfield consisting of a slew of hard runners, playmakers and bruisers.

Exactly the type of offense that has taken them this far.

According to the Southwestern Buckeye League website, Madison has combined for over a conference-best 3,448 yards rushing. There’s not much of a passing playbook when you’re operating an offense with a running clock for more than half of your games.

“The seniors have taken responsibility for where they are right now and where they want them to go,” Poff said. “Their effort gets all the credit. They make it happen.”

WHAT YOU SEE IS WHAT YOU GET

Those slew of backs who could see the ball include Evan Crim, Mason Whiteman, Cameron Svarda, Jake Phelps and Gabe Higgs. Whiteman calls the signals under center.

“If you go through our game film,” Poff said, “they all look the exact same. It’s easy to get caught up with running the exact same thing, but these guys are family and that’s what has made their play so special.

“We don’t throw the ball very much,” Poff added. “We just want to keep getting first downs. They probably think it’s boring.”

“He’s kind of installed that into our program,” Crim said. “I love our style of play. It’s upbeat and quick. That’s what carries over into winning.

“I think this is awesome,” Crim added. “I think this year, people expected this. We have to come out and play your very best.”

Madison’s best comes from the defensive side of the ball, Evans says.

“As a defense, we take offense to people scoring on us,” said Evans, a senior noseguard. “I think our brutality comes out. I think we like to see that 0 on their side of the scoreboard. This backs up our personality. This is a tough group and we’re hard-nosed. If there were a bunch of whiners, they were gone in August. We weeded them out.”

The Pirates are more than just the Mohawks’ next opponent.

“They’re state champions,” Poff said. “There’s no denying that. Last year we came up a little short and I’ll take credit for that. I didn’t have our team ready to play. I’ve been real open about that.”

The Madison contingent knows exactly who Wheelersburg is. Some say sour taste. Others say revenge.

Mohawk country leans toward the latter.

Madison was ousted from the Division V playoffs a year ago in a 15-10 loss to the Pirates. With the Mohawks jumping out of the gate to a 10-0 lead, Wheelersburg reeled off 15 straight.

“They’ve got experience, the same physicality and return at the same high-intensity level,” Wheelersburg coach Rob Woodward said of Madison.

“We just need to focus on growth and development,” Woodward added of his squad. “A lot of people make comparisons to this year’s Week 1 to last year’s Week 15, and that’s really not fair for them to do that. You’ve got to look at where we are right now.

“The big thing is that we focus on making these kids young men and leaders,” Woodward continued. “We’ve got to go out there and have fun and play football and get through the challenges that they face. How our guys respond and recognize these situations is a justification on how our guys will do.”

Poff mirrored that about his Mohawks.

“Our kids are so disciplined yet so much fun to be around,” Poff said. “We’re proud to call them men. They’re just as disciplined off the field too. When this season comes to an end once Canton gets here, it’s going to be sad to see.”