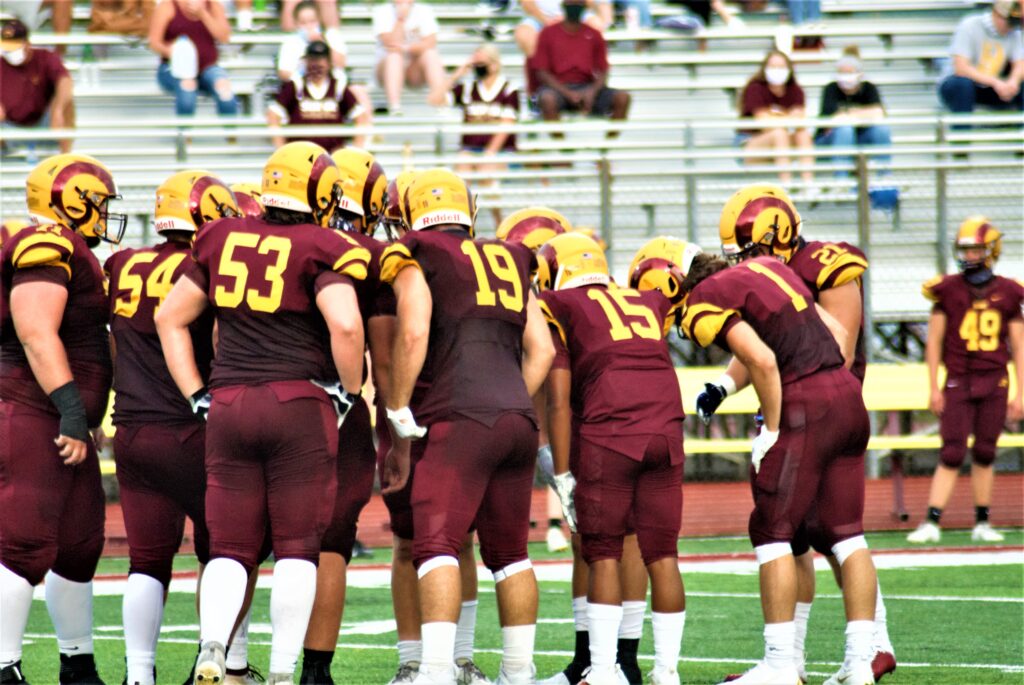 NEW RICHMOND — They came. They saw. They took control. They sat on a bus for two hours. They waited. They checked the radar. They waited longer. They got off the bus. They stretched. They re-took control. They tore out the heart of the opponent. They conquered. And they advanced.  Over a good football team.

This was supposed to be one of those games where nothing came easy.  Both offenses had put up a ton of points this season.  New Richmond had scored 77 in a game against Western Brown earlier.

The Lions had played neck-and-neck with undefeated Division IV powerhouse Clinton-Massie, only losing to the Falcons by a score of 49-41.  Very respectable.

But the Ross Rams?  They were having none of it. Friday night’s contest would not be close.  And the only intrigue would be the weather forecast.

Ross put its feet on the throats of the Lions early and often.  The Rams received the opening kickoff (out of bounds) and took the opening drive 65 yards, right to the end zone — 11 plays, 11 runs, 5 minutes and 41 seconds off the clock.  A Brayden Fraasman 16-yard touchdown capped off the drive, and the Rams had an early 7-0 lead.

In a game where both teams had high-powered offenses, the Ross defense became the X-factor.  Ross held New Richmond to a three-and-out on their first drive and gave C.J. Boze good field position, from which to send the second round of attacks into the Lions defense.

The second attack was much quicker and to the point than the first time.  Boze kept it himself and scored from 52 yards out on just the second play of this drive.  Less than a minute off the clock this time, and the Ross Rams had a scoreboard smiling upon them with a 14-0 lead.

A Cody Smith interception on 4th down finished the next New Richmond drive, and Ross struggled just a tad to get the engine back in gear.  Potentially facing their first punt in the game, on 3rd and 15, Boze broke off a 33-yard scamper, keeping the drive alive.  The yardage then began to come in chunks, as Jackson Gifford added a 15-yard run, and Brayden Fraasman found the end zone for the second time — this time from 15 yards out.

New Richmond tried to carve out a foothold into this game before it was too late.  They stripped the Rams on their next drive, Ross’s only turnover of the game.

Down 21-0, with the first real signs of life, New Richmond’s Luke Lytle threw a 56-yard quick-strike touchdown pass — a short pass and a long run after — to Isaiah Bowman.  New Richmond faked the extra point, but the holder was tackled short of the goal line, leaving the score at 21-6.

The Ross Rams took control of the ball. The first sign of weakness shown all game. The first adversity to overcome. And with lightning off in the distance. The storm rolled in as the Rams methodically moved the ball down the field. As the sky lit up with fireworks, the Rams crossed midfield, looking for one more score before the ill-timed, inauspicious discontinuity descended upon the stadium. Brayden Fraasman scored on a 20-yard touchdown run, the third of the game for him, and then came a lightning delay.

For 1 hour and 55 minutes, Ross and New Richmond officials checked the radar, sent text messages, debated world politics and tried to figure out the best course of action. Badin’s game had already been postponed until Saturday. As had Lakota West’s. As had Edgewood’s. Surely, the weather that had wreaked so much havoc on the playoff schedule back home had now shown up, uninvited, rearing its ugly head across Eastern Cincinnati.  3 minutes and 17 seconds sat on the clock.  An ominous number, causing much consternation.  If that 3 minutes and 17 seconds remained on the clock for too long, it would require a second trip to the confines.  A second 50-minute ride, possibly early Saturday morning would await the Rams if they could not make that time disappear.  And with 30 minutes resetting every time a new flash of lightning or clap of thunder materialized, we could be here awhile.  Oh, if we had only just gotten to the 3rd quarter, it would have been a complete game. Go home and report the final score to the OHSAA. But no.  3 minutes and 17 seconds says, “Not a chance.”

The rain continued to buffet the stadium, and then…a break.  The lightning and thunder subsided, leaving only the rain, coming in at half-strength.  And the Ross Rams were provided their break in the weather to eliminate those pesky 3 minutes and 17 seconds.  Ross took the field and stretched, quickly held New Richmond’s offense to a 3-and-out, handed the ball to Jaye Warren to break off a 46-yard run, and then handed the ball to Jackson Gifford for a 1-yard TD plunge.

Ross elected to kick, up by 28, and save the running clock conversation for the next score.  A classy move, to be sure.  The Rams took a 35-6 lead into halftime.  Well, not really halftime.  Halftime had consisted of a bunch of socially-distanced fans dodging rain drops, looking at a clock that read 3 minutes and 17 seconds.

This was a quick meeting of the captains at midfield to determine direction-of-play, and off we went. Like a dad with a DVR remote or a Madden player hitting the “X” button when Jonathan Coachman starts speaking, we were skipping halftime.

New Richmond had but one more chance to take advantage of the gap in momentum caused by the delay.  It was snuffed out quickly and decisively.  Ross’s Zaak Morrell made a big hit, forced a fumble, and recovered said fumble, giving the Rams the ball at the 2-yard line. The trifecta for Morrell, and the beneficiary was Jaye Warren, punching in a 2-yard score on the very next play. Ross led 42-6, and the Rams sensed blood in the water, tackling New Richmond’s kickoff return at their own 5 yard line.

The running clock was underway, and the Rams took it to a whole new level of dominance and that pesky 3 minutes and 17 seconds no longer a factor.  A very quick stop, followed by a very easy 25-yard touchdown run by Warren, and the Rams had total and complete control, sitting on a 48-6 lead and playing out the string.  New Richmond added a late touchdown pass to AJ Metzger, and the battle was over.  48-12, Rams.

Which opponent lie in the path of the Ross Rams next?  They do not know. Undefeated Bellbrook, the top-seed, will now host the St. Mary Roughriders on Saturday at 7 p.m. If Bellbrook wins, a trip to Sugarcreek ensues for these valiant Ross Rams next Friday night. But should the 8-seeders from the Western Buckeye League triumph on Saturday, well, that just might be the greatest prize of all for the Rams — a semifinal HOME GAME against the St. Mary’s Memorial Roughriders at Robinson Field next weekend.