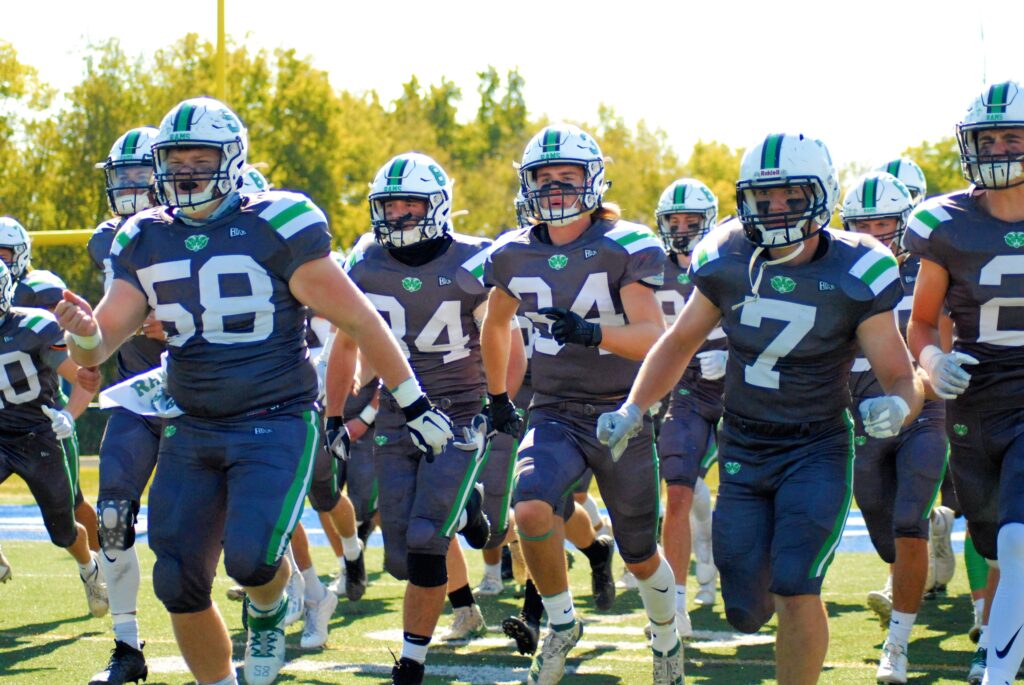 ST. CLAIR TWP. — The Badin High football team hadn’t played a meaningful game in weeks, and there were times the rust showed on Saturday at Kumler Field.

But, the Rams prevailed.

Badin defeated the Tippecanoe Red Devils 35-14 to move on to the next round of the Division III playoffs.

“I think having three weeks off really reared its ugly head on us,” Badin coach Nick Yordy said.

This game originally would have been played Friday night, but because of lightning in the area, it was rescheduled for a noon start Saturday.

Early in the first quarter, Badin didn’t show any signs of a long layoff. The Rams forced a turnover on the Red Devils’ first possession. Badin defensive back Jayden Carter forced quarterback Troy Taylor to fumble at the Red Devil 18-yard line, and the Rams recovered the ball. Three plays later, Badin quarterback Landyn Vidourek scored on a sneak from Tippecanoe’s 1-yard line.

Badin scored on its next possession, as Dallas Rawlings ran it in from 3 yards out.

Signs of being off for three weeks began to show a little later.

On a Michael Schweinefuss field goal attempt, the ball was snapped too low, and it was quickly picked up. The Rams fell short of getting a first down to extend the drive.

Badin hurt itself with 11 penalties in the game, as well as costly turnovers when the Rams were in a position to score.

On third and 5 at the Red Devil 6-yard line, Vidourek under-threw the ball to Braedyn Moore, and Tippecanoe’s Nick Robbins intercepted the pass.

It would be the first of three Vidourek would throw on the day.

Tippecanoe’s possession was a short one because of a Braden Imhoff interception at the Red Devil 21-yard line. The turnover led to a Jack Walsh 6-yard touchdown run and more questions for Tippecanoe coach Matthew Burbacher to answer at halftime.

“We gave them two short fields there, and I think that was the biggest difference in the game,” Burbacher said.

At the beginning of the third quarter, Badin was set to receive the second half kickoff. Jackson Kleather kicked the ball deep to the Rams’ 3-yard line where Lucas Moore received it. Moore followed his blockers all the way for the 97-yard touchdown. That score would put the Rams up 28-0.

Badin seemed destined to put this game on cruise control. But Tippecanoe was not out of it yet, finally orchestrating an almost 3-minute drive that resulted in a 15-yard touchdown run by Taylor.

Vidourek did score again to push the Ram lead to 35-7. But mistakes kept Badin from actually keeping its foot on the pedal. Vidourek threw what would be his third interception, this one deep into Tippecanoe territory that led to a touchdown pass by Taylor to his tight end Cole Coppock.

The Rams did pull off the win despite the layoff, preparing themselves for a familiar opponent.

“Alter is Alter, we know that,” Yordy said. “I think I’ve played them like 10 times, and I’ve only been here for four years, you know. And we keep running into each other. They’re a quality team and very well-coached. Alter beat a really good opponent last night.”

Badin will meet its GCL Co-Ed rival Alter for the second year in the row in next week’s Division III regional semifinal. The Knights pummeled the defending state champion Trotwood-Madison Rams 42-0 in their matchup on Friday.