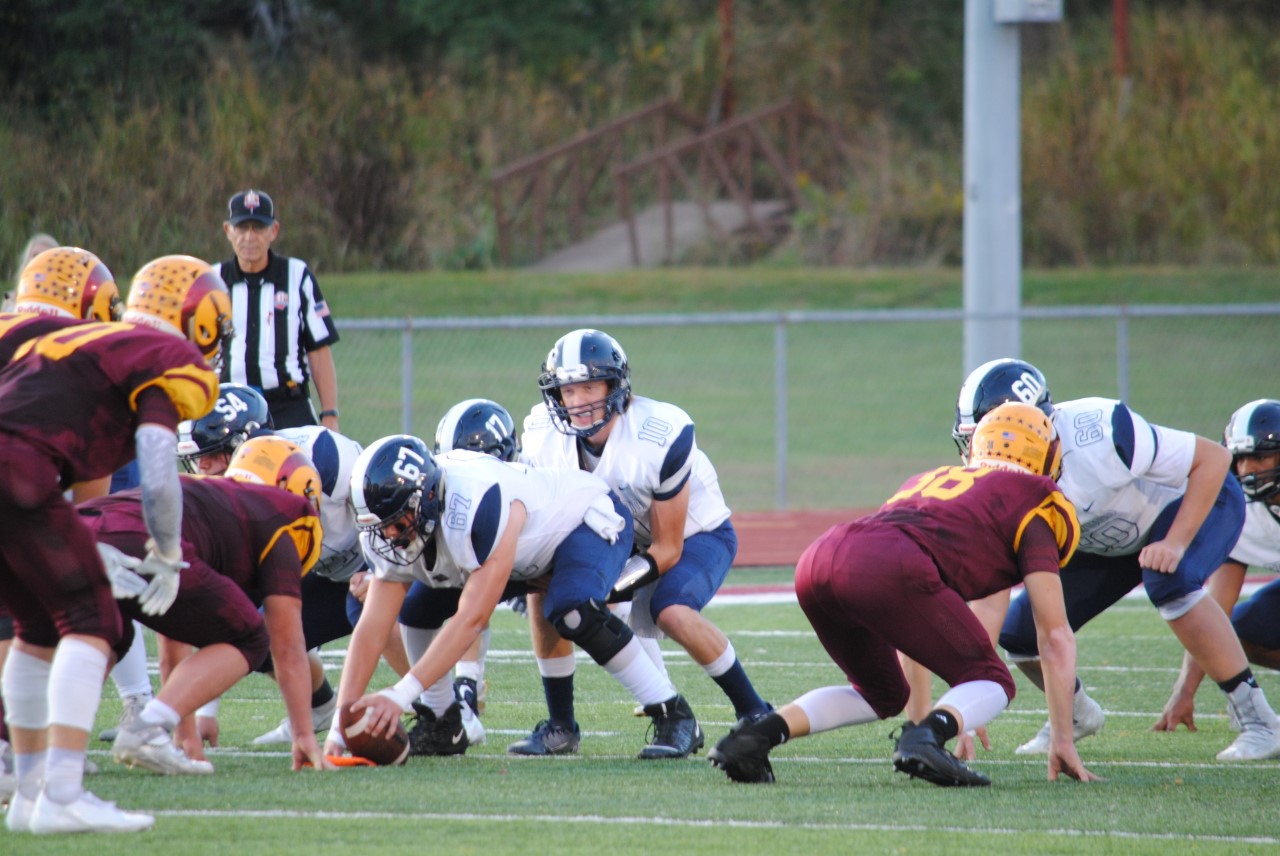 ROSS TWP. — There is a popular belief in sports that defense wins championships. Offenses can be flashy and generate the highlights, but preventing your opponent from scoring is what leads to victory.

And although their offense totaled some impressive numbers including 483 total yards and 9 TDs, it was the defense that carried the Ross Rams as they defeated the Edgewood Cougars 63-35, securing their first-ever Southwest Ohio Conference Championship.

“It feels great,” said Rams coach Kenyon Commins. “It’s the first SWOC Championship in school history. They’ve never won it and the first conference championship since 2011. You guys have talked to me long enough, I want to end this thing on the right note too. I don’t want to walk away with a loss next week. So I hope they enjoy this, this weekend. Ice it up, come in and watch film in the morning, at 8 a.m. we’re back to work. I’m excited, I’m pumped up for them but we’ve still got a lot of work to do.”

Senior running back Jackson Gifford, who finished the game with 182 yards rushing and 4 TDs, echoed his coaches comments about the importance of the historic win for his team.

“Coach Commins talked about a moment and this was a big moment for us as a program,” said Gifford. “First SWOC championship in school history.”

Edgewood scored on the very first drive of the game and from there the two teams traded scores. The Cougars finished the first quarter ahead 14-7, but the Rams tied the game to start the second quarter when quarterback C.J. Bozman tossed a TD pass to Brayden Fraasman. Bozman also finished the game with121 yards rushing and 2 TDs.

Then, with about 2 minutes left and the game tied at 21, the Rams defense forced the Cougars to punt.

When the Rams took over on offense, they marched the ball right down the field and capped off the drive with a touchdown by Gifford to go ahead 28-21 and eventually taking the lead into halftime.

“You know we talked about that all week,” said Edgewood coach Scott Clemmons. “The times we have the ball we’ve got to score and then change the field position. And you know if they get a stop they’re going to come back just the same and that’s what they did.”

The Cougars kicked off to the Rams to start the second half, and the Rams wasted little time putting themselves in tremendous field position when Jaye Warren, who finished the game with 31 yards rushing and a TD, returned the kick past midfield to the Cougars’ 42 yard line.

From there the Rams finished the drive with another touchdown by Gifford to increase their lead to 35-21. The Cougars did manage to score again towards the end of the third quarter, but by that time the score was 42-28. The game was firmly in the grasp of the Rams.

Then in the fourth, after the Rams’ lead had ballooned to 63-28, it was announced the remainder of the game would be played with a running clock until the lead dropped below 30 points. The Cougars did manage to put a score on the board in the final seconds of the game to make the score 63-35.

“That first half, Coach Clemmons did a phenomenal job of dinking and dunking us and picking where he wanted to take his shots,” said Commins. “He did a great job running that play clock down and really using it. And then defensively we made some phenomenal adjustments at halftime.

Added Commins, “If you think about their scores defensively in the second half, it’s a kickoff return down to the one that they score on and then the young man with the backups in there breaks one at the end of the game. Defensively that was basically a shutout in the second half.”

Ross (4-1), which has won four in a row, hosts Mt. Healthy next Friday to close out the regular season, while Edgewood welcomes Harrison.