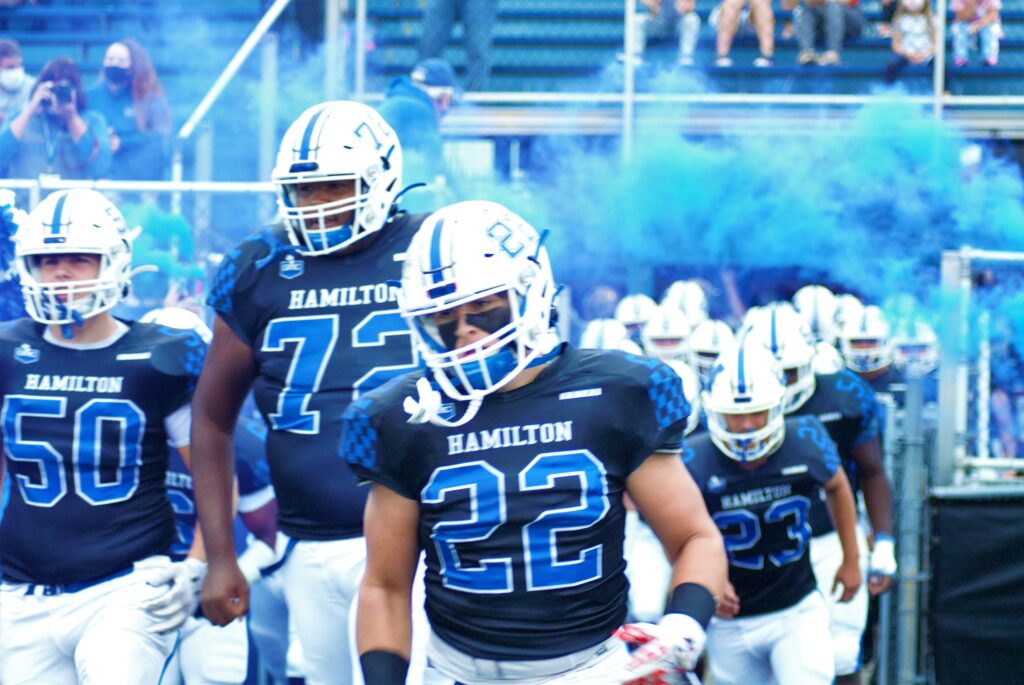 HAMILTON — The Hamilton High football team was helped by the efforts of Malik and Gabe Verdon on Friday night.

Those efforts, and some huge defensive plays, resulted in a 12-7 victory for the Big Blue against previously unbeaten Greater Miami Conference rival Mason.

Malik scored the go-ahead touchdown and Gabe sacked Mason quarterback Michael Molnar on fourth down. The Big Blue had plenty of big-time plays in getting their first victory over Mason in 10 years.

The sweeter part of the victory? It was on Hamilton’s homecoming.

“We told ourselves before the game we were not going to lose no matter what we had to do to get this game,” Verdon said.

This game was reminiscent of the week three matchup against Fairfield. The Big Blue needed their defense to step up and they did just that with Verdon’s sack.

“Our defense did great all night holding them to seven points,” Verdon said.

Hamilton kicker Erik Rios got his team on the board first in the second quarter, kicking a 40-yard field goal for the early lead.

The Big Blue lead though would be short-lived. The Comets started at their own 38-yard line in favorable field position. Mason wore down Hamilton’s defense on this drive as running back Nolan McCormick accounted for 31 of his 97 yards rushing on this drive alone. Molnar shared the load, running for a 13-yard touchdown to give the Comets their only lead of the game.

Hamilton was able to inch close right before halftime with another field goal by Rios, this time a 37-yarder down the middle with only two seconds left.

The Big Blue were only trailing by one down 6-7. That score would remain until Verdon’s hard-fought touchdown.

Hamilton’s run-heavy scheme accounted for 225 yards, controlling the time of possession for most of the game. Running back Keyshawn Stephens was responsible for half of those yards with a team-high 113 yards on 20 carries.

“This very win right here is a great win in the GMC,” Mahon added. We hadn’t beaten Mason in 10 years.”

Jordan Jones had 11 tackles for Hamilton, which has won 3 straight. The Big Blue (3-2) face Colerain on the road next Friday.