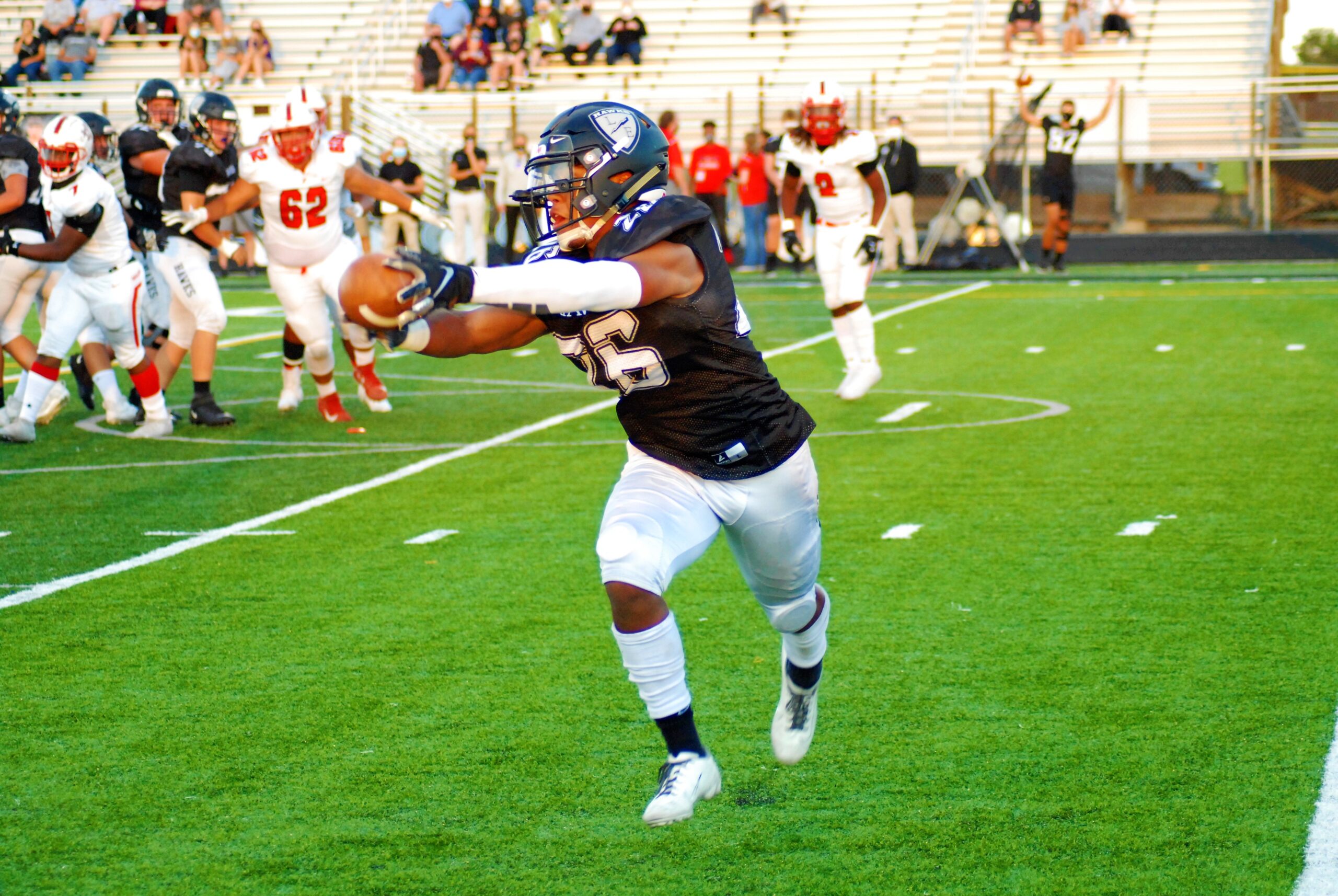 With two seconds remaining and the Lakota East Thunderhawks looking at a one-point deficit, head coach Rick Haynes left the game up to his junior kicker Trevor Hoffmann.

Hoffmann missed an extra point early in the first quarter that led the ‘Hawks to their late-game hole, but with the final seconds ticking off the clock, Hoffmann booted a tipped kick over the crossbar to give Lakota East an improbable 23-21 come from behind victory.

“Felt great that was my first game winning field goal,” Hoffmann said, “It got tipped I was a little nervous, but I got it. I needed to bounce back after that.”

The Thunderhawks jumped out to an early lead on an efficient opening drive that ended with a T.J. Kathman pass to Tavier Lugo-Flowers. They added a 15-yard touchdown pass from Kathhman to John Scott to take a 13-0 lead into halftime.

“Our kids I thought they were really resilient,” Haynes said. “They were resilient last week against Princeton when we went down 7-0 right at the beginning of the game. They got an onside kick and our kids battled back, and they did the same thing tonight just at different times of the game.”

The Thunderhawks added a 51-yard Josh Thornhill touchdown run midway through the third quarter to take a 20-0 lead, and a rout looked inevitable.

“Seen the hole and took off with my speed and they couldn’t stop me,” Thornhill said. “Those are the moments we practice for. Those late practices going through four quarters and all that, these are the moments that we live for.”

These are the moments we practice for.

The Thornhill touchdown awoke Fairfield though.

Forced to insert Ki’arren Love in at quarterback after an injury to starting quarterback and the Greater Miami Conference rushing leader Talon Fisher late in the first half, the Indians staged their comeback behind two second half drives that spanned the latter portions of the third quarter and early fourth quarter.

The two dives ate up 10:45 of play clock, the second drive taking 17 plays and resulting in the second of two Ki’arren Love 3-yard touchdown runs.

“Ki’arren Love coming in giving us a spark,” Fairfield coach Jason Krause said. “He didn’t take a whole lot of reps this week since we moved him to slot, but he jumped in there and ran our game plan and made some throws. We had a chance to come back and we just got to learn to finish.”

After the final Love touchdown run, East was looking at its first deficit with 2:30 left to play and 78 yards to go. The Thunderhawks needed a big play, and they got it on a 60-yard Kathman to Charlie Kenrich pass to put East within striking distance and ultimately leading to the Howard game winner.

Trent Stephenson added 91 receiving yards and a touchdown for Fairfield.

The win improves Lakota East to 2-3 on the season.

The loss drops Fairfield to 1-4, which the Indians quite possibly could be the most dangerous 1-win team in Region 4 heading into the final week of the regular season.

The Thunderhawks travel to Oak Hills next Friday, and Fairfield will host Princeton.