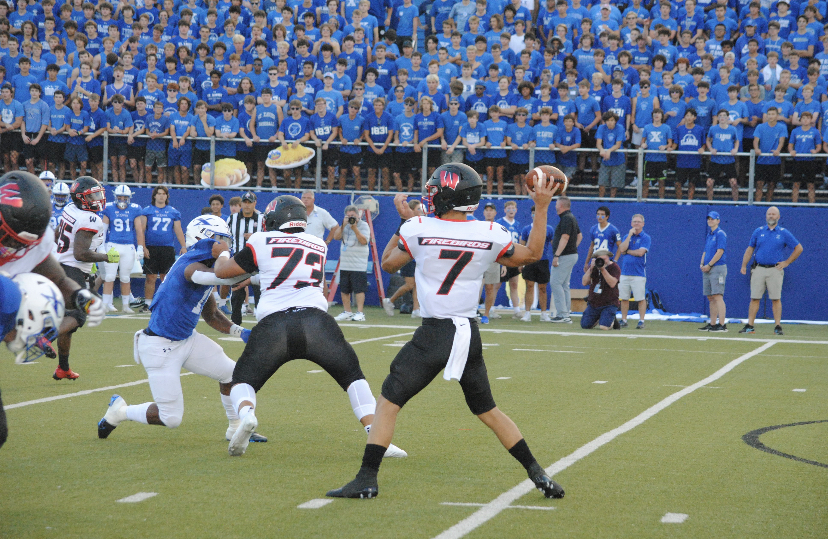 CINCINNATI — The Lakota West Firebirds fell to the St. Xavier Bombers 31-14 on the road at RDI Stadium on Friday night in a showdown between two of the top high school football teams in Ohio.

Firebirds coach Tom Bolden pointed to turnovers and his team’s inability to run their offense as designed, especially after losing top receiver Trent Lloyd to injury during the kick return in the first quarter.

“When Trent went down on the kickoff in the first quarter, I mean he’s our best receiver, fifty percent of the offense is built around him,” said Bolden. “So that was a little bit hard to overcome for sure and then the interception the kid made early in the second half off the screen, I mean what a great play by him and then he had another one, it was two great plays by him.”

“But you know we couldn’t consistently run the ball,” he added. “That doesn’t help, so therefore they can just tee off on us.”

The Bombers took the lead in the first quarter with a 27-yard field goal by Mason Lohmiller making the score 3-0. But the Firebirds took the lead with a couple touchdown passes by Mitch Bolden in the second quarter, who finished the game with 103 yards passing, two TDs and two INTs.

Bolden’s first TD was a 4-yard toss to Brennan Remy giving Lakota West a 7-3 advantage. Then the Firebirds extended their lead on their following drive with a TD pass from Bolden to Alex Afari making the score 14-3.

The Bombers did answer with a touchdown of their own when running back Charles Kellom ran five yards for a touchdown,but Lakota West remained ahead 14-10 headed into halftime.

Tom Bolden said that as poorly as they played, his team remained in the game, but they ended up making too many mistakes and turning the ball over- things St. Xavier didn’t do.

“We played terrible, and we were in that ballgame,” said Bolden. “They’re a great football team and I said it will come down to turnovers and who makes more plays. They didn’t turn the ball over and they made more plays and that’s usually how this game goes.”

The Firebirds started the second half with the lead but that soon changed after Mitch Bolden threw his first interception of the game to Grant Collins who returned it 27 yards for a touchdown making the score 17-14.

St. Xavier followed that up with another touchdown, this time a 25-yard pass from quarterback Brogan McCaughey to Max Klare making the score 24-14. Then late in the fourth quarter Mitch Bolden threw his second interception of the game which led to a 13-yard TD run by Kellom, finished with 101 yards rushing and two TDs, putting the Bombers ahead 31-14.

St. Xavier coach Steve Specht reiterated that the teams that make fewer mistakes are usually the ones that come out on top.

“In games like this it comes down to who makes the fewest mistakes and who makes a play here or there,” said Specht. “And we just happened to do that.”

Specht said that this was just week one and that both teams will take a look at the film, make their adjustments and likely be much better for the postseason. He added there’s a good chance that Lakota West and St. Xavier could meet in the playoffs.

“Now we go and we get better,” he said. “We’ll see what we’re doing wrong and Tommy’s going to do the same thing. They’ve got a hell of a team and we’ll both be different and come playoff time we may see each other again.”

After the game Tom Bolden expressed how much he hates to lose. However, by experiencing the loss, he believes his team will be much better because of it.