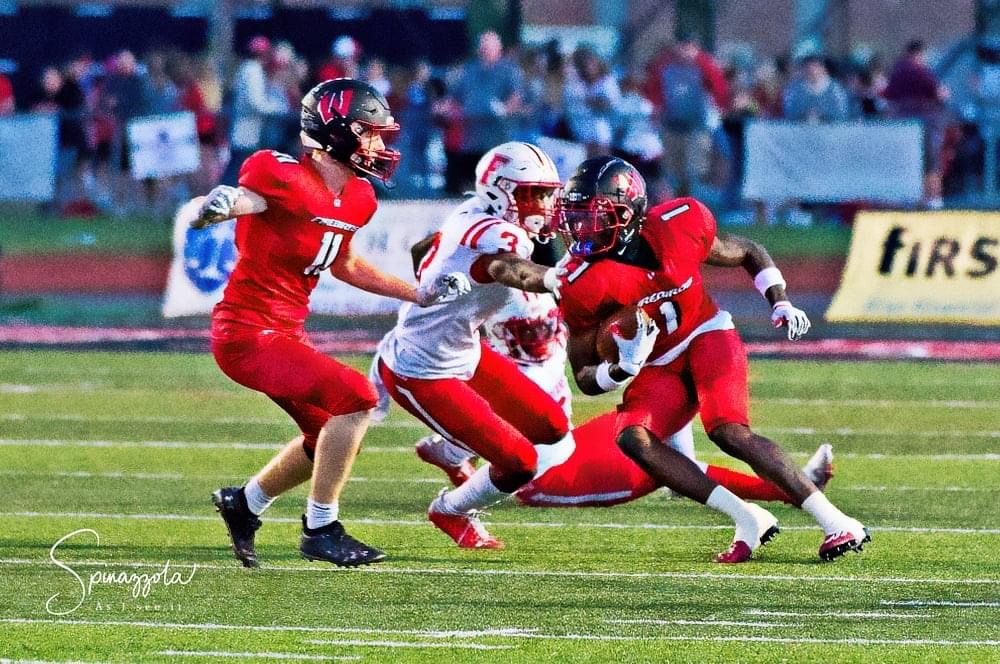 The Firebirds dominated Greater Miami Conference rival Fairfield in all phases in their 42-10 win at Firebird Stadium.

From start to finish Lakota West played at a high level. Quarterback Mitch Bolden threw a 54-yard pass to Alex Afari. Afari ran past the Fairfield defense. Afari ended up fumbling while fighting for extra yards when he was tackled, but he jumped on it.

“We saw [the play] at the far end of the slot, and we knew that the ball was going to go to him [Afari] or 1 [Jyaire Brown],” Fairfield coach Jason Krause said.

After coming up empty the first three downs, Lakota West coach Tom Bolden called out his “Jumbo” package on fourth down resulting in a Cameron Goode touchdown from 3 yards out for a 7-0 lead.

The defense then got a turnover from Jyaire Brown. Brown scooped up the ball on a Juesters Fataki fumble, to Fairfield’s 1-yard line where he was forced out attempting to score. Bolden took a quarterback keeper in for an early 14-0 lead with 6:56 to go in the first quarter.

The Firebirds extended their lead at the beginning of the second quarter with another touchdown run from Bolden for a 21-0 advantage. It was all Lakota West in the first half with the defense playing a huge part in a rather successful night.

“We just do our jobs on defense because we’re just so darn athletic,” Tom Bolden said. “We fly around and get after it, it’s tough to move the ball on us.”

Fairfield had issues all night moving the ball. The injuries on its offensive line did not do any favors in what was a long night for quarterback Talon Fisher. He was under duress most of the night. Lakota West’s defensive line sacked Fisher three times and even having to leave the game for a moment because he was hurt on a play.

Fairfield finally got on the board on Brock Snell’s 28-yard field goal right before the half trailing 28-3. It gave the Fairfield faithful some hope about a potential comeback. Unfortunately for Fairfield outside of a touchdown in the fourth quarter, the margin for error was a lot to overcome. Bolden’s 20-yard touchdown to Jyaire Brown was the final nail in the coffin, pushing the lead to 35-3 late in the third quarter.

Bolden accounted for four of the six touchdowns scored, with Goode and Jiovonni Wilson getting a touchdown apiece. Bolden controlled the tempo of the offense with quick passes to his receivers while also keeping some plays alive with his feet.

“I had a four-touchdown game but it didn’t feel like it. It was sloppy, and it was a lot of mistakes — but at the end of the day a win’s a win,” Mitch Bolden said.

This was a statement game for the Firebirds as they were looking to separate themselves from Lakota East in the conference standings. Lakota East (5-0 GMC) beat conference rival Colerain 7-6 tonight to stay tied for the first place with Lakota West.