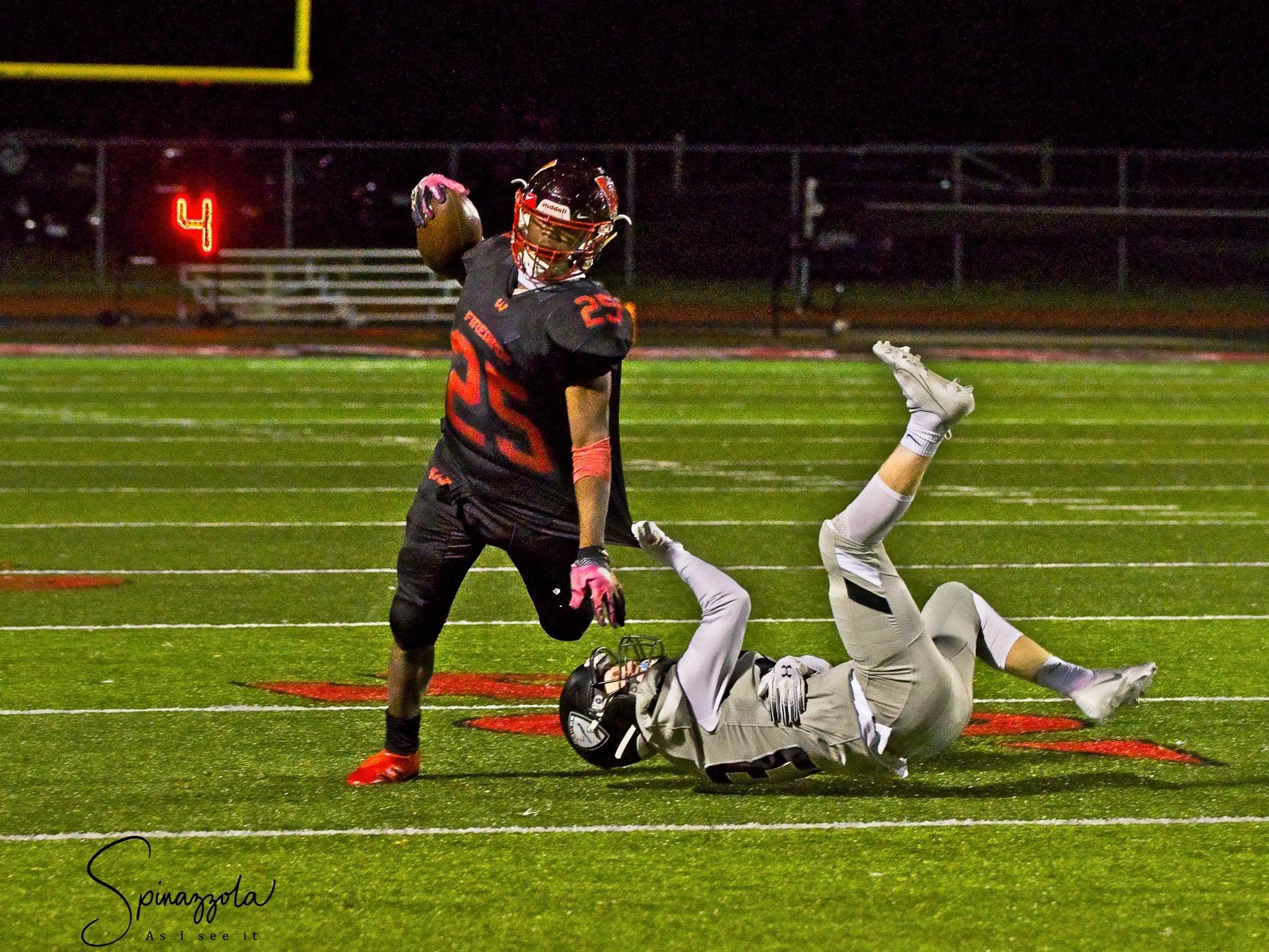 WEST CHESTER TWP. — The annual but unplayed 2020 regular season East-West rivalry game had to wait until the second round of the playoffs.

The Lakota West High football team scored 17-straight points to start the second half and pulled away with a 31-14 victory, moving the Firebirds on to the regional semifinals against Colerain next Friday.

“I told the kids when we got this, the good lord works in mysterious ways,” Lakota West coach Tom Bolden said. “Obviously being able to move on in the playoffs and play in a second-round game, but to play against your neighborhood rival and things like that make it that much more special.”

The Firebirds faced an early 7-0 first-quarter deficit off a fumbled punt attempt from their own end-zone, but it didn’t deter them from making a statement late in the game. It only emboldened them.

Accounting for three touchdowns, two passing and one rushing, sophomore quarterback Mitch Bolden ran for 120 yards and threw for another 74 and helped cement the Firebirds status as the top team in Division 1, Region 4.

“I thought Mitchell played really well,” Lakota East coach Rick Haynes said. “They ran the ball really well against us. You run the ball, you have a chance to win, and they did.”

The Lakota East Thunderhawks played well between the twenties but were hampered by either penalties or turnovers as the crossbars grew larger. On two occasions, they could sniff the endzone but walked away with nothing — once on a partially blocked field goal at the end of the first half and another on a drive deep into Firebird territory that ended with a West recovered fumble late in the third quarter.

“We can’t just come down here and not come away with points,” Haynes said. “Twice we did that. Especially against a defense like that, you can’t miss those opportunities and that’s what happened. Offensively we got down there twice and came away with nothing.”

The vaunted West defense had not given up a point in 12 quarters heading into the matchup and would extend the scoreless streak to 15 quarters before a TJ Kathman to Jack Hartmann touchdown pass early in the fourth quarter when the game was all but decided, breaking the scoreless streak.

West battled back from the early hole and tied the game on the first of two touchdown passes from Mitch Bolden to Adrian Davis for 13 yards.

After an East 3 and out, Bolden again connected on a touchdown pass, this one for 31 yards to Trent Lloyd and the Firebirds took a 14-7 lead they wouldn’t give up into halftime.

“Proud of him,” Tom Bolden said of his quarterback and son. “Proud of the way he played. He took a huge step forward, running the ball, throwing the ball. Kind of when things got little rough — for a sophomore to take it upon himself like that I’m awful proud of him.”

West opened the second half with a flurry and dispatched East on its first drive with a fourth and 24 goal stand. Eight plays later Mitch Bolden marched into the endzone from 16 yards out and the Firebirds began their rout. Cameron Good led all rushers for West with 141 yards and one 35-yard touchdown that put the game away in the fourth quarter.

“I was telling myself I fumbled, let’s make it up to my lineman and get them off the field quick,” Good said.

Lakota West (7-0) moves on to face the Colerain Cardinals, head coach Tom Bolden’s former team and a squad that fell victim to the first of the Firebirds’ three shutouts this season.

“It will be interesting,” Bolden said. “It’ll be another knock down drag out. They have a great defense we have a great defense, that’ll be a ballgame of whoever takes care of the football. We’ll have our hands full next week with that big game against Colerain. It will be awful exciting.”

“It’s a huge deal,” Good added. “We have to go beat them again and we are going to train like we did the first week. We’re going to do it again, aint no question about it. We got to get the W.”

Lakota East will decide later this week if they choose to play again, according to Rick Haynes.