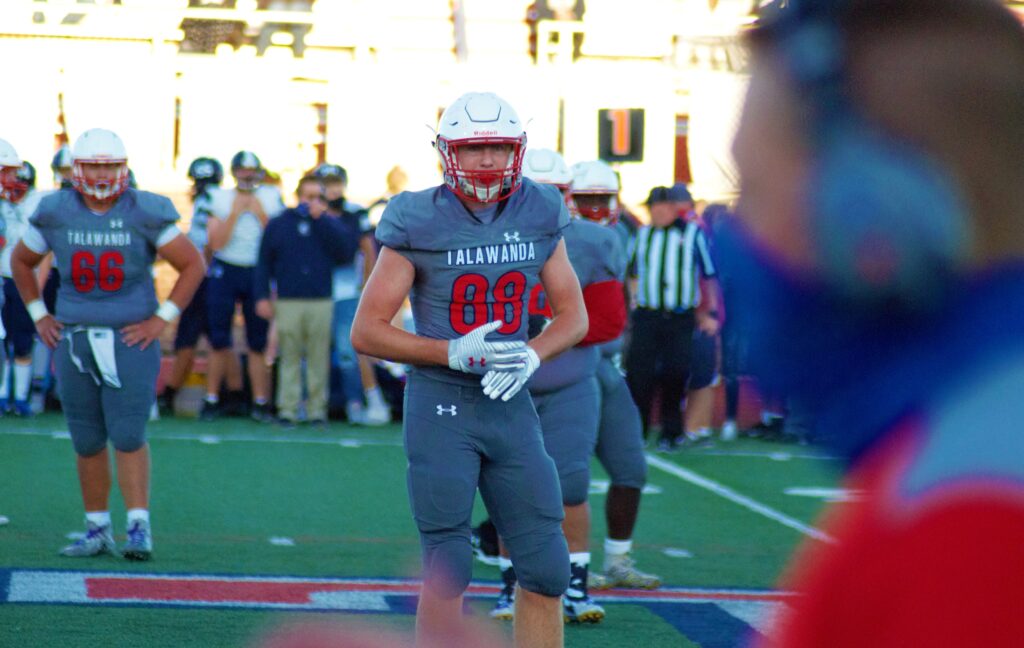 KINGS MILLS — The Talawanda Brave gave plenty of effort on Friday night, but the outcome unfortunately did not go in their favor.

Talawanda fell 42-7 to the fourth-seeded Kings Knights in a Division II playoff bout at Kings.

Though the Brave did not accomplish their mission, they did exactly what Talawanda coach Larry Cox preached before the game — and that was to fight hard.

“I think that our kids kept fighting and that’s a credit to our kids,” Cox said. “And that’s all I ever want them to do.”

The Knights built a 21-0 lead in the first half with junior running back Max Sannella earning two of those touchdowns.

The Brave had an opportunity late in the second quarter to cut into the Knights lead. Talawanda was able to get the ball to the Knights’ 9-yard line with 1:14 to go before the half.

Talawanda, which was going to receive the ball to start the second half, came up empty. Brave running back Deondre Bothast-Revalee ran the ball three straight times, the third time coming at a crucial third-down.

The Knights forced the junior running back to go backward, pinning him back at the Knights’ 18- yard line. Brave kicker Matt June’s field goal attempt fell short of the uprights to end the half.

Cox’s team did give the effort, but the mistakes that kept them out of the game haunted them.

“I don’t fault our effort or their heart,” Cox said. “We’re going to continue to keep getting better.”

On a fourth-down punt attempt, Joe Claire dropped the ball at the Brave 28-yard line. Claire tried picking up the ball, but the Knights’ Evan Scott was right there for the recovery, giving Kings favorable field position.

Jay Holubetz scored the second of his two touchdowns to extend the Kings lead to 28-0 early in the third quarter. The Knights’ running game became a point of emphasis, accruing for 350 total yards. Holubetz and quarterback Will Kocher each had 100-yard rushing nights.

Kings coach Alex Garvin credits his offensive line for their performance, which created the necessary holes for the running game to succeed.

“Will played really, really well, ran the ball really hard, and our O-line was creating some big gaps,” added Garvin

Kings will move on to play Eastern Cincinnati Conference rival Turpin next week.

Talawanda will look to still play some more games this season, building momentum for next season as Cox wants his team to learn a valuable lesson even in defeat.

“Some days your best effort doesn’t mean you’re going to be successful,” Cox said. “You got to keep trying and working to get better.”

Bothast-Revalee finished with 103 yards and a score for the Brave, who slipped to 3-5.