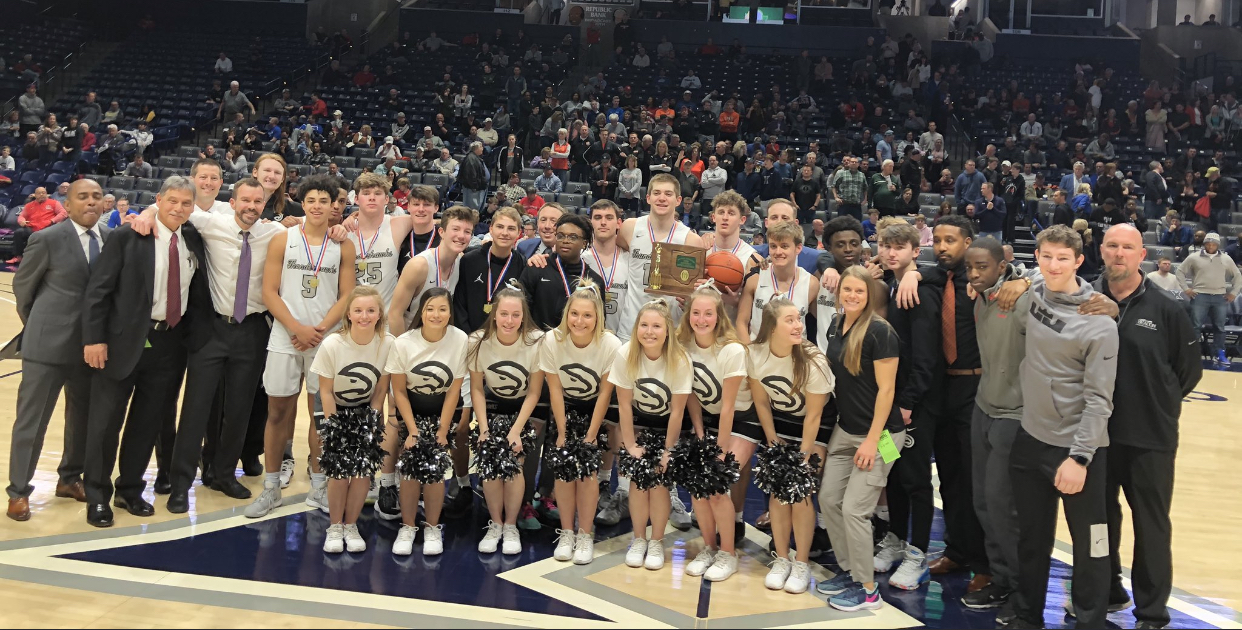 But with 1.6 seconds remaining, senior Alex Mangold stole the game for the Thunderhawks in their 33-32 victory at Xavier University’s Cintas Center.

For the first 31 minutes and 59 seconds, Mangold had yet to score. But down a point and 1.6 seconds left between East and its third district championship, the senior toed to the line and clanged the first free throw around the rim and through the net.

“What was going through my mind is I got to make these free throws. I mean, what else would go through your mind?” Mangold said. “That’s probably the biggest shot I’ve ever shot in my entire life, and I just got to thank my teammates to get me to that spot. Honestly, it wasn’t my best game at all. I just got to thank my team for getting there. All I can do is just get the offensive rebound, put it back up, and got fouled.”

Mangold finished with just those two points, but his work on the glass and a game-high nine rebounds helped keep the undersized Thunderhawks from falling behind by too much. It was those last two free throws, though, that gave the senior gray hairs in the future.

“Made the first one, a lot of weight came off my shoulders,” Mangold said. “Hit the second one and it’s just — the game wasn’t over. We still had 1.6 seconds. Just had to finish the game.”

A half-court heave by Chris Herbort for the Beavers clanged off the right side of the rim as time expired to give the Thunderhawks their second straight district championship.

“When the ball went up with the trajectory it had, I’m going ‘Oh my God, that’s going to go in’ and that’s going to be a bad way to lose,” Lakota East coach Clint Adkins said. “That kind of that theory of negativity, but man, I was sure happy to see that it didn’t go in. But when he let it go, it scared me.

“You know for a guy not to have a bucket up to that point, psychologically can be thinking about the first 31 minutes and 58 seconds,” Adkins said of Mangold. “He didn’t think about that. All he thought about was, ‘What can I do in order to help my team and knock down some free throws?’ Obviously clutch free throws, you know I can’t say enough about the big fella.”

A slow first quarter that saw the frame end in a 4-2 Beavercreek lead begot a more active second quarter. After scoring the only bucket for East in the first, junior guard Nate Johnson started to assert himself in the second by scoring the first nine points of the stanza and the first 11 points of the game for East.

“It’s just those times I know that coach tells me that I’ve got to get the team going,” Johnson said. “So in that time, I knew we were sluggish. It was time for me, my mentality to take over and get our energy up.”

“I think Jaden (Coles) might have hit one, Charlie Kenrich came in and got a tip,” Adkins said. “So it kind of got us going, but we were just really stagnant in our motion tonight. Like I said, in order for us to win on Wednesday we’re going to have to be a lot better.”

Coles nailed the game’s only 3 at the 3 minute mark, and he followed that up with an offensive rebound and put back to score five points in a 19-second span — extending the East lead to its largest on the afternoon at 16-10.

Charlie Kenrich added another offensive board and put back with less than a minute to go in the half, and East rebounded from a slow first quarter to take an 18-14 halftime lead.

Beavercreek chipped away and, with 2:28 remaining in the third, retook the lead on a Yousef Saleh layup. Saleh scored the Beavers’ first nine points and was doing to the ‘Hawks what Johnson had done to them a quarter before.

Saleh led the Beavers with 15 points while Johnson led all scorers with 16. But Johnson missed two missed free throws with 1:20 left and the Thunderhawks clinging to a four-point lead was a momentum swing. On the ensuing Beaver possession, Herbort was fouled on a put back for a three-point swing and a one-point East lead.

Coles missed the front end of a 1-and-1 with 41 seconds left and Beavercreek center Gabe Phillips was fouled on his shot attempt 20 seconds later, hitting both setting up Mangold’s late game magic.

“Yea. Yea it is,” Mangold remarked about missing last season’s district championship. “Last year it was a funny story. I didn’t even get a little medal last year. But I can get one this year. I’m just thankful for my teammates again, they got to this spot. Whole team effort. If I’m not scoring on offense, I can get on the ground. I got banged up a little bit for battling on the court. Rebounds. Just doing my part if I’m not scoring. I just got to produce in other ways. Just help my team win.”

“It was an ugly win, and we weren’t real crisp on the offensive side of the floor,” Adkins said. “We know we got to get better, but at this point survive and advance right?”

Lakota East improves to 24-2 and advances to face Lasalle, a 60-52 overtime winner over St. Xavier, at the Cintas Center at 8 p.m. on Wednesday.

Beavercreek finished the season at 16-10.