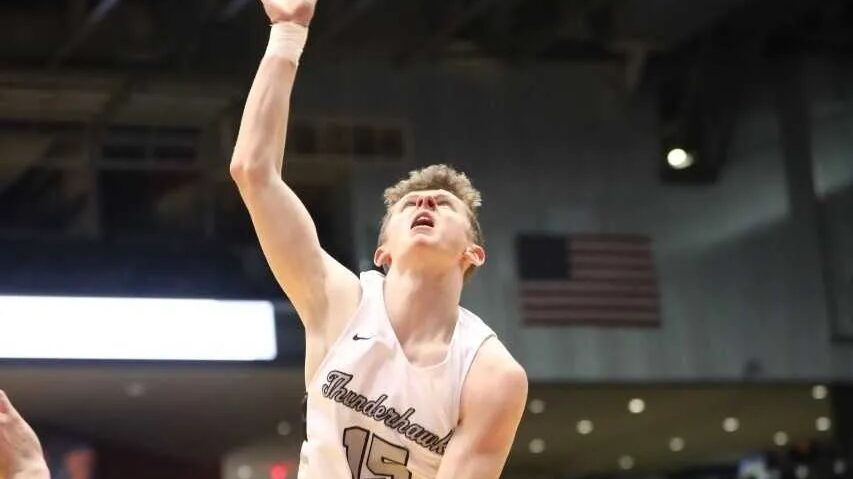 DAYTON — Three up and three down, as the Lakota East Thunderhawks advanced to the Sweet 16 with a 50-36 Division I sectional final victory over the Kettering Fairmont Firebirds at University of Dayton Arena on Saturday.

The district champion Thunderhawks came out of the gates sizzling like a plate of fajitas, hitting their first three shots at the hands of senior Bash Wieland. He opened the game with a wide open 3-pointer.

“I was confused because at first they were sagging off me,” Wieland said. “I’ve never seen that. They weren’t locking into me like teams usually do.”

Wieland followed that up with a layup from a Nate Johnson assisted pass. Wieland wasn’t done yet, and he nailed another 3 with 5:42 left in the first quarter — sending the ‘Hawks to an 8-0 lead and the Thunderhawk faithful to their feet.

“Obviously we jumped out and hit a bunch of shots early on and gained the early momentum,” Lakota East coach Clint Adkins said.

The Thunderhawks (20-5) never trailed in the game.

Wieland added another bucket and after one quarter, East held an 18-8 lead that felt much larger than it really was.

In the second quarter, East slogged through a three point offensive effort and the Firebirds clawed back to within three at 21-18 at the break.

“We had a couple turnovers and a couple quick possessions that allowed them to get back in the game,” Adkins said. “The (Kellan) Bochenek kid had the dunk and all of a sudden they got a little bit of momentum.”

At the 4:26 mark in the second quarter, Fairmont’s Ryan Hall was called for his third foul. In an attempt to hold the blood-smelling sharks of Lakota East at bay while Hall sat on the bench, the Firebirds used the stall tactic.

Holding the ball at midcourt for the final three and a half minutes, the Firebirds opted to keep the game close without Hall on the floor — eventually making a move towards the basket with 10 seconds left in the half.

“The Hall kid picked up his third foul and at that point I thought they had the momentum in the game,” Adkins said. “And then they held the ball for three minutes and thirty seconds. I get it, they have their best player with three fouls sitting on the bench. I thought it kind of killed their momentum and gave us an opportunity to rest as well.”

“I don’t think that determined the game, but the first half ebbs and flows and you’re going to have that when you have two good teams playing,”

The second half started the same way as the first half. Wieland nailed a trey, giving the ‘Hawks a six point lead that would stand up.

Back-to-back Grant Spicer layups and a Wieland-led fast break resulting in a Kaden Fuhrmann layup pushed the East lead to 36-24 with 6:02 remaining in the game.

“Just kinda right place, right time,” Spicer said. “We just wanted to win. For the seniors last year that didn’t get to cut down that net, for the guys that got hurt this year, and most importantly we wanted to win for us.”

The Thunderhawks used a 31-18 rebounding and 13-6 assist margin to their benefit. Every starter for East had at least four rebounds and two had at least five assists.

“I thought the way we rebounded the ball tonight was the difference in the game,” Adkins said. “Every shot that went up it was block out, block out, block out and everybody pursued the ball. We pride ourselves on sharing the basketball and we led the league in assists this year. That’s what we expect our program to be.”

“They’re really good. I think we have a shot, we have to play really well. Darn near perfect,” Spicer said about top-ranked Moeller, which Lakota East will go to battle against in a regional semifinal at 6:15 p.m. on Wednesday at Xavier University’s Cintas Center.

“I feel like there’s a little bit of work to do,” Wieland added. “Very talented, but I think we can give them a shot. They’re a very good team, very well coached. As long as we do what we’re supposed to do I think we’ll be okay.”

Bochenek scored a team-high 15 points for Fairmont, which finished the season at 17-9.