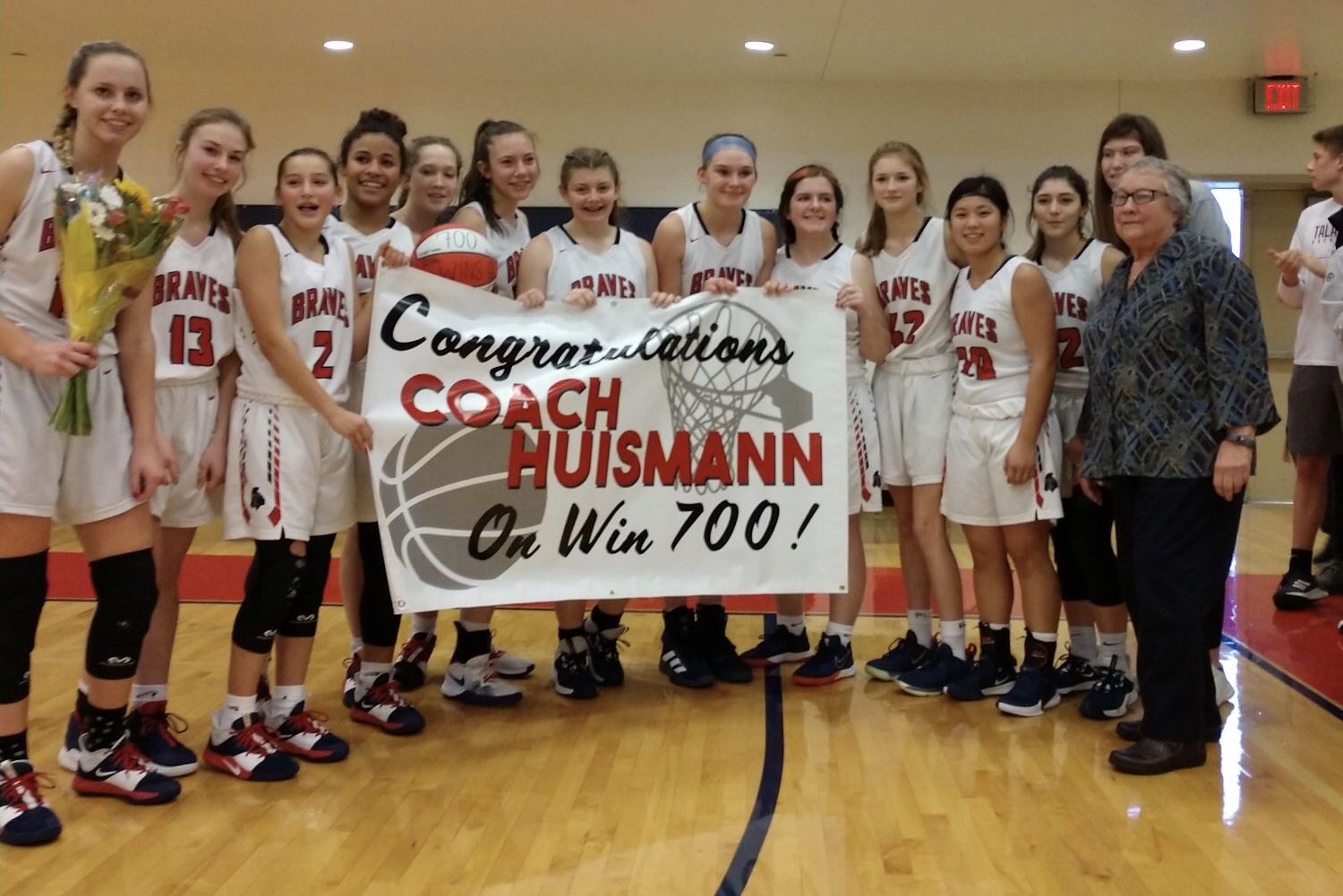 OXFORD — The Talawanda High girls basketball team hasn’t had the chance to celebrate many victories this season. The Brave recorded their first win of the season just last week when they defeated Northwest 57-36 to bring their record to 1-8.

And while the goal heading into their contest against the Ross Rams was to win back to back games, the Brave’s win-loss record wasn’t the only record on the mind of Talawanda coach Mary Jo Huismann and her team.

A win Saturday would mean she had accomplished something only two other Ohio girls’ basketball coaches have accomplished — 700 career wins. The other two are Ed Zink with Beavercreek and Dave Butcher of Pickerington.

It wasn’t the prettiest of games. The Brave committed a total of 30 turnovers, leaving fans shaking their heads at times and maybe even concerned about whether they would pull this one out. But the Brave never relented in their determination to secure another win and get their coach into the history books.

So, after finally extending their lead in the second half, the Brave defeated the Rams 42-31 — bringing their record to 2-8 and giving Huismann her 700th career win.

“It makes you feel pretty old,” Huismann joked when asked about how it felt to reach such a milestone. “I have had a few good games, and this is right there too.”

The team didn’t discuss the potential milestone throughout the week except for a moment outside the locker room after their win over Northwest when one of the girls pointed to Huismann said, “One more.”

But it was certainly a motivating factor for the team and one of the reasons why so many fans and former players showed up to watch.

And knowing that former players were in attendance to witness their former coach reach such an impressive achievement, added some pre-game jitters for some of the players as they warmed up before the game.

“It was really nervous,” said Talawanda senior Kyra Koontz, who finished the game with 5 points. “We saw all of her former players sitting over there. But we knew we could do it.”

Freshman Kylee Fears, who led the team with 14 points, also described what it’s been like to be a part of coach Huismann’scoaching history.

Both teams took turns leading one another as the lead changed four times throughout the first half. And although the Brave did appear to have things under control when they went up by seven, the Rams battled back and closed the gap. With 52 seconds left in the second quarter and the Brave up 20-16, the Rams scored to cut the Brave’s lead to two making the score at halftime 20-18.

The score remained the same well into the third quarter. The Brave were unable to extend their lead. But then late in the quarter they gained some momentum and extended their lead to go ahead 27-19 before the start of the fourth quarter.

From that point forward the Brave would never relinquish the lead. But that doesn’t mean that the Rams didn’t make things interesting. At one point with 3:14 left to go in the game the Rams cut the lead to just three making the score 33-30. But that would be as close as they’d get. The Brave soon pulled away and would eventually secure the 11-point victory.

Now that this milestone is behind them the Brave can now go back to business as usual and continue to build on the successthey’ve had these last two games.

“Hopefully now that we’re on a 2-game winning streak we realize that we can keep up with these teams and we can play with these teams,” Koontz said. “I think that our game on Monday we’ll keep it going.”