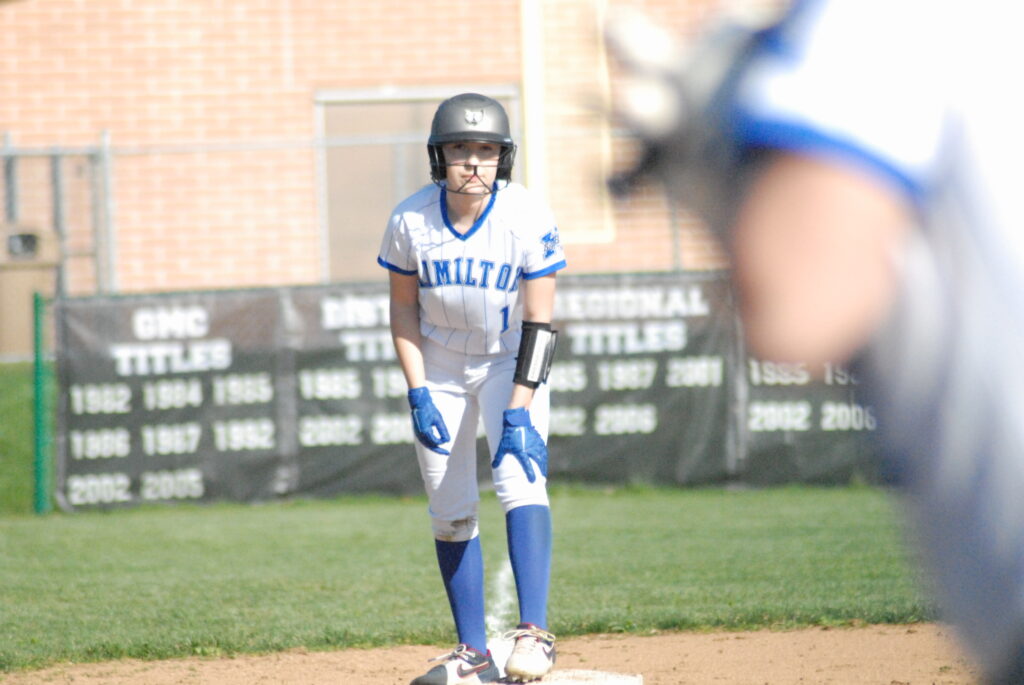 BATAVIA — The top of the fifth inning opened with a bang between the Hamilton Big Blue and the West Clermont Wolves on Wednesday.

Locked in a scoreless tie, senior catcher Makayla Grant led the inning off for Hamilton with a blast over the left field fence to give Big Blue what they thought was the first run of the game. But on appeal, Grant was ruled out at second for not touching the bag, killing some early inning momentum and sending the spectators into a frenzy.

Big Blue managed to mount a two out rally later in the inning, placing runners at second and third, but were unable to break the scoreless tie. And then the Wolves pounced.

West Clermont scored three times in the bottom of the fifth, which was all the Wolves needed to down Big Blue 3-2.

“We knew what we were going to get — their pitcher has been a four-year player for them, and she’s a good pitcher,” Hamilton coach Steve Heckman said. “We had a hard time solving her to start, and I think we had nine popups or something like that the first time through. We started timing it out a little bit, and we got some good things going on.”

West Clermont pitcher Reece Hampton led the Eastern Cincinnati Conference in ERA and strikeouts, and through the first two innings the Big Blue could not figure her out. Hamilton mounted a couple rallies in the third and fourth innings, but came away empty both times setting up the homer that never was and the West Clermont three run fifth.

Grant got her revenge in the top of the seventh by blasting a ball over the exact same part of the fence two innings earlier to draw Big Blue to within a run. But Hamilton couldn’t rally further.

“It was good. It was sad,” Grant said. “It’s my senior year, my last game. Upsetting, but we played the best we could — so I’m very proud of myself and my team.”

Grant said she was a little surprised to have hit the second fence-clearing ball.

“I was like, ‘Oh my goodness. I didn’t think I could do that,’” Grant noted. “I was just happy I could get something else on the board.

“My four years have been crazy and amazing. Last year was hard because of Covid,” Grant added. “We came back this year as good as we possibly could have. It’s amazing because we have seven seniors, so a lot of our team will be leaving. We have a lot of youngins that I hope will take after us because we tried to give them a good season for their first year.”

Hamilton ends the season at 14-13, with eight of those losses coming in the first 10 games. Big Blue won 12 of their last 17 games, and Heckman said he was proud of how his girls fought all season.

“We started 0-5 and just couldn’t get it going. Found ways to lose and found ways not to win but you know we came back and had some big wins,” Heckman added. “Had a big win at East, and we hadn’t won there in a long time. That kind of got stuff going for us. We beat Fairfield, another good team.

“We did some good things, and they started to believe and that’s a hard thing,” Heckman added. “I’m not going to use excuses because nobody played last year, and I think you are seeing a lot of other teams are really struggling with that. We were one of them. But to keep coming, keep believing, and to keep showing up every day and then doing what we ask — I love them with my all and that’s why I’m still doing this.

Grant had 3 hits, Katelyn Polido had 2, and Jaycee Taylor, Bri Hochscheid and Cassidy Higginbotham each had a hit apiece for Hamilton.

Freshman Nevaeh Woods held her own in the pitcher’s circle, as she did all season long. She finished 10-6 this season.