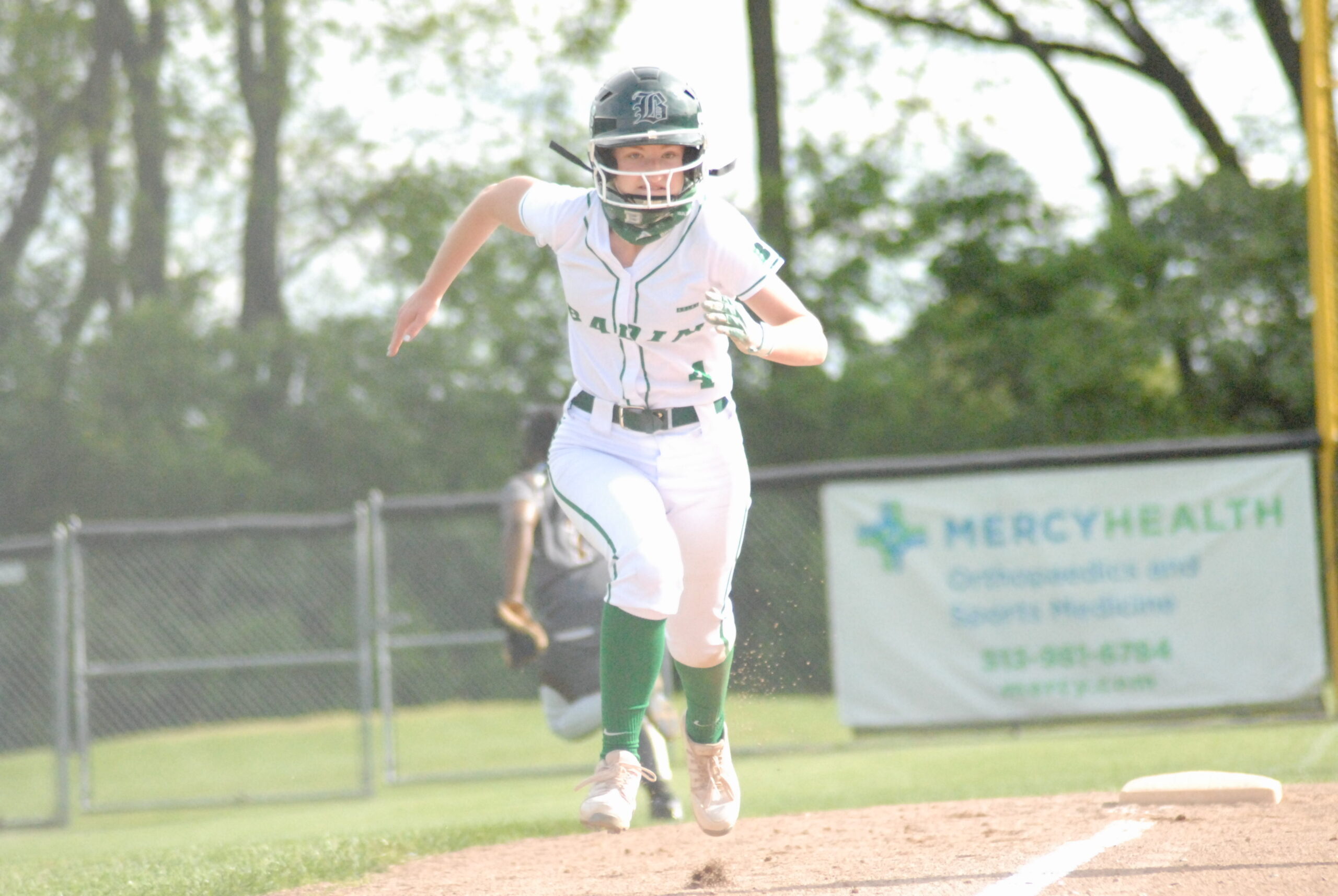 HAMILTON — Rachel Nusky understands her role as a leadoff hitter. And so does the rest of the Badin High School softball team.

Nusky reached base every time she stepped up to the plate and scored three runs, and the rest of the Badin offense followed suit as the Rams captured an 8-0 win over visiting Roger Bacon to start Division II tournament play on Tuesday.

The Greater Catholic League Co-ed champions moved to 21-5 on the season and will face Goshen at home on Thursday at 5 p.m.

“We tried to explain to them, ‘Look, congratulations for being 20-5 and winning the league. But the season started today,'” Badin coach Greg Stitzel said. “What we did in the regular season — that’s all over and done with. We were 0-0 heading into today.

“That was the kind of message we kept giving our girls,” Stitzel added. “And I think they knew that with the way we played today.”

Senior Emma Kent had her usual dominant performance inside the pitcher’s circle, dealing six strike outs and only allowing two hits to go along with her fifth shutout of the season.

“We know to just concentrate on the next pitch, too. We get locked in,” Nusky chimed in. “If we mess up, forget about it. You’ve always got another pitch to prove yourself. Don’t bring your at-bats to the field and don’t bring your fieldwork to the dugout. Those are two separate things.”

Feenstra, Badin’s shortstop, was part of a momentum booster in the fourth inning.

“It brought out our defense and our offense,” Feenstra said regarding a double play she helped turn that ultimately got the Rams’ dugout going. “We really started to hit the ball immediately after that. We had a lot of great plays after that, too, and I think it really just brought out some momentum going into the next at-bat. It really made our offense pop.”

Following the 1-6-3 double play in the top of the fourth, Feenstra led off the bottom half of the inning with a single. She later scored to put the Rams up 2-0. That was followed up by Vess and Kortney Cummins base hits. Vess and Cummins came around to score, while Nusky reached on an error before crossing the plate to make it a 5-0 contest.

“We’re doing what we know what we can do,” Feenstra said. “We need to keep doing what Badin softball does, and that’s play as talented as we know how to play. We’re a great team — we just need to continue to be focused, and we did that tonight.”

Badin added another run in the fifth and two more in the sixth before closing it out in the seventh.

“We need to keep playing hard and have some confidence out there,” Feenstra said. “We can’t be afraid to make mistakes. If you make one, get the next pitch — the next at-bat — and keep helping your team out.”

Stitzel pointed in the vicinity of the Rams’ dugout following the win on Tuesday.

“This biggest thing that we wanted to do — which we already put it up there on the dugout board — for 2021 was getting that league championship,” Stitzel said. “We’re trying to take steps here. Win the championship, win 20 games. That’s huge for us. Now, it’s time for bigger goals.”

Having not hitting the field in 2020, Badin looks to avenge its early exit from Ross in the second round in 2019.

“We’ve got a really good season going for us right now,” Nusky said. “We all really think we can go far as long as we continue our focus and keep hitting the ball. I think we’re looking good.”