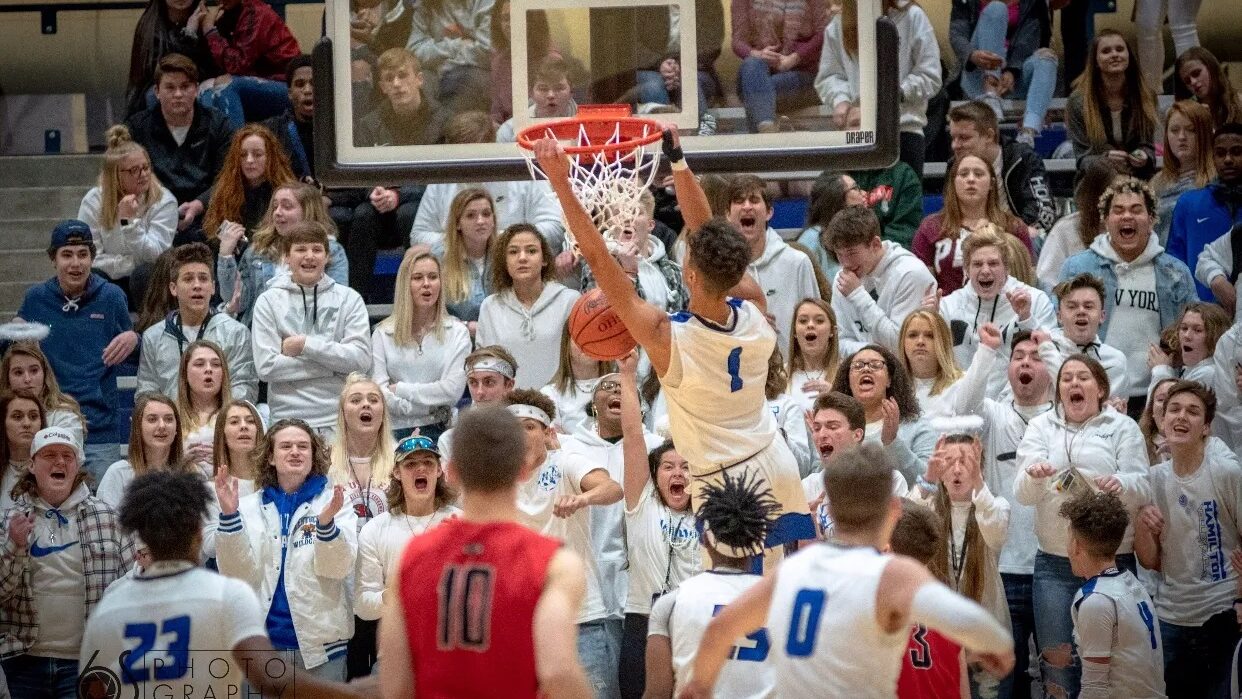 HAMILTON — The Hamilton High boys basketball team had a one-point lead heading into halftime against visiting Lakota West. By the time the buzzer sounded at the end of third quarter, the Big Blue had a commanding 10-point lead on Friday night.

That culminated into a 74-53 victory for Hamilton on the opening night of its new gym floor.

A buzzer-beating trey at the end of the third quarter from D’Marco Howard and a sweet Jaylen Robinson to Trey Robinson scoop and oop, put the home crowd on their feet and settled down the well-traveled Firebird student section.

Midway through the third quarter, the game was tied at 32. Neither team wanted to break.

Buoyed by a 10-0 run from that point, the Big Blue pulled away and showed that they are ready to compete in the rugged Greater Miami Conference.

“We played better as a team, we passed the ball, and we were less one on one,” Big Blue coach Kevin Higgins remarked about the run. “We trusted each other and that led to us getting some plays in the open floor. Guys shared the basketball. We just didn’t play one on one as much.”

Returning to play for Hamilton was D’Marco Howard, coming off a four-game absence due to illness. The senior guard put up 21 point and six rebounds to go along with two assists.

“I miss playing on the court,” Howard said. “It was a great feeling, especially coming back to the home court and the fan support. I really missed the court and playing with my teamates.”

“He’s a really good player,” Higgins said. “He obvisouly makes a huge difference, I thought he played well in some stretches and obvisouly he’s explosive in the open floor.”

Finally getting to flex their offensive might  on their home floor, Big Blue also deployed the Robinson brothers.

Trey and Jaylen managed to help lead Hamilton through a four-game stretch without Howard to a 3-1 record. They put up 20 and 13 points respectively. Trey added 11 rebounds.

Lakota West fought for two and a half quarters, but ultimately their young players couldn’t keep up with Hamilton.

“First of all they are a very talented team,” Firebirds coach Jim Leon said of Hamilton. “That kid Howard, Coach Higgins did a smart thing, kind of eased him into the game and he started playing well and we don’t have anybody that can match up with that guy.

“We have a young basketball team,” Leon added. “I’m playing four  sophomores but to be honest late in the third quarter early in the fourth they just wanted it more.”

The Big Blue travel to Colerain, while Lakota West travels to Fairfield on Jan. 8.