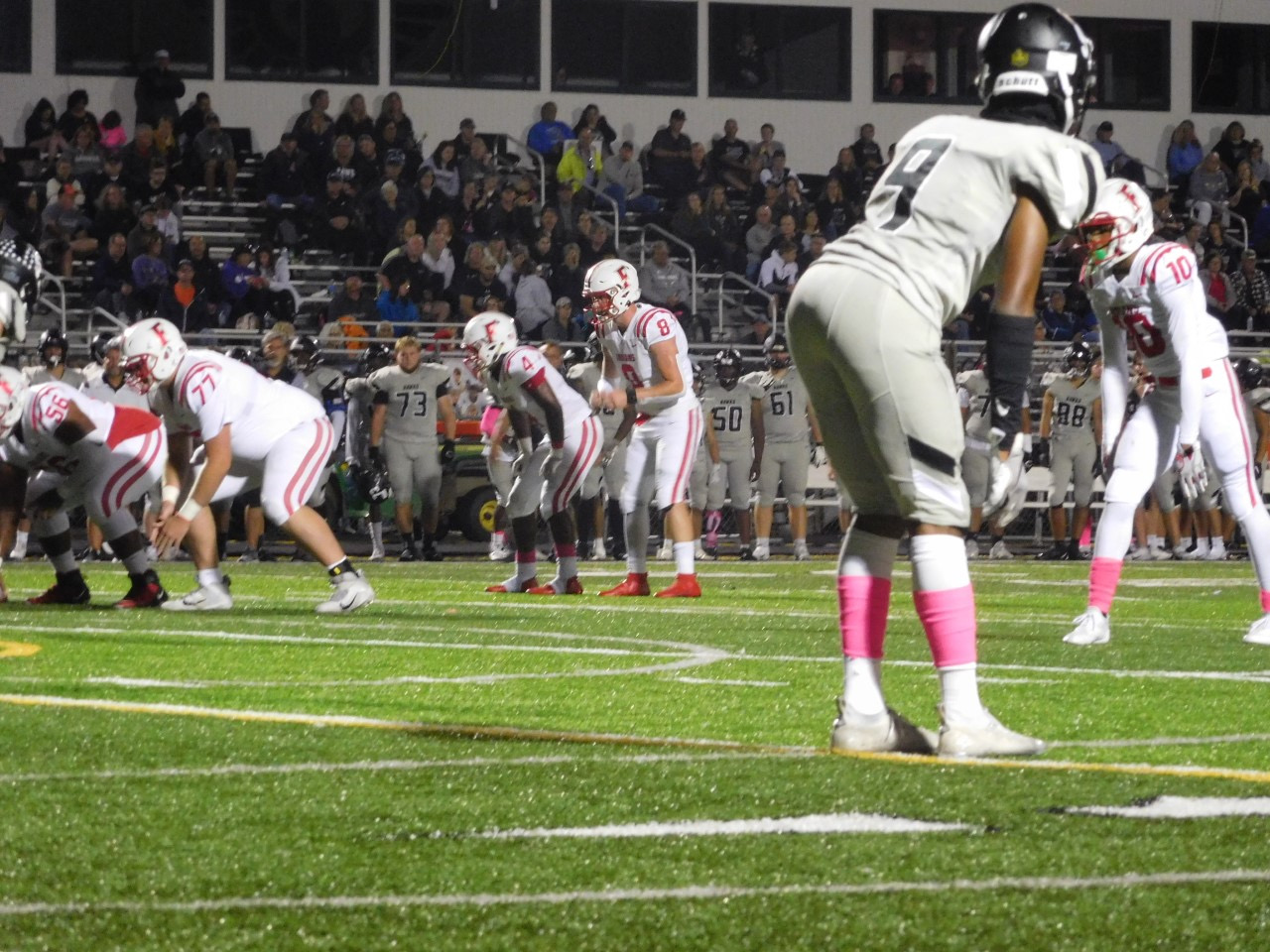 **DISCLAIMER: All outlooks and scenarios depend on all games being played as scheduled.  If a game gets cancelled due to COVID, it changes the math…sometimes in little and insignificant ways, and sometimes in much bigger ways!!**

In past years, I have painstakingly written out every single scenario for every single Butler County team.  I’m not doing that this year because of the scheduling volatility that has happened with COVID.  Every week, a handful of games have been cancelled, with the result being some AD’s scrambling to find a last-minute opponent.  OhioScheduler and Joe Eitel have almost become high school football versions of Tinder, giving AD’s the option to “swipe left” or “swipe right” on particular available opponents.  Because of this, if I give you a super-detailed account of all scenarios, then one game cancellation alters the scenario.

I’ll give you a HYPOTHETICAL example: Badin has clinched the #1 seed in Region 12.  They have a HUGE lead, and nobody will be able to catch them.  But let’s just say that a COVID outbreak happens with Celina High School and Hilliard Davidson High School.  Now, Celina (1-8) is already mathematically eliminated in Badin’s region, and Hilliard Davidson is in Region 3 and hasn’t played against a single Southwest Ohio team; this shouldn’t factor into ANYTHING, right?  Wrong.  In this hypothetical example, St. Mary’s Memorial (#2 in Badin’s region) is now left without an opponent.  Once they hear that Hilliard Davidson has also cancelled their game, they might look at the schedule and see that Davidson was supposed to play against 9-0 Upper Arlington.  If those two AD’s get together last-minute to schedule a game, then St. Mary’s Memorial trades in a Division III opponent worth 5.0 second-level points for a Division I opponent worth 58.0 second-level points.  And Viola!  St. Mary’s Memorial can beat Upper Arlington, McNick can beat Badin, St. Mary’s Memorial can get additional wins from Defiance, Kenton, London, Bath, Valley View, Fenwick, Talawanda, and North College Hill and beat out Badin by three hundredths of a Harbin point for the #1 seed.  In the meantime, since Celina now has a bye, Wapakoneta (who played Celina earlier this year) gets their L2 divisor reduced by one, making it just a few hundredths of a point easier for them to eke out a Top 4 finish over Ross and/or Monroe.  It’s the Circle of Life, Simba.  It’s Six Degrees of Kevin Bacon.  The entire State of Ohio is related and interconnected.  And the alteration of just two games sends a ripple effect through the rest of the state.

So on to the outlooks.  All outlooks and scenarios presented are subject to change if certain matchups change with the COVID cancellations and fly-by-night reschedules.  But assuming most everything remains in place, this SHOULD at least give you an accurate-enough picture for all of the Butler County teams.

Lakota West cannot finish any lower than 5th.  A victory over Lakota East would clinch a Top 4 spot for the Firebirds, with a double-home-game.  Lakota West can catch Moeller and St. X for the #1 seed, but the Firebirds would need a TON of things to go their way.  Moeller controls its own destiny for the #1 seed.  A Crusaders win over Detroit MLK ices the top spot for Moeller.  But St. Xavier’s final opponent (Eagle’s Landing Christian Academy of Georgia) is only a 2-win team.  The Bombers will not have a ton of firepower there.  A Lakota West win will massively close the gap; it’ll come down to 2nd level points to determine the #2 seed if both win.
————————————————————————————–

Lakota East has clinched a 1st round home game.  The Thunderhawks can get into the Top 4, but it would require help.  After last week’s upset loss to Fairfield, East is not guaranteed to be above West merely with a head-to-head win over the Firebirds in Week Ten.  It will be close and could shake out either way.  An East win combined with a Princeton loss to Colerain would clinch a Top 4 spot for the Thunderhawks.
————————————————————————————–

The big upset win over Lakota East last week puts Fairfield in the 7-spot, for now.  Fairfield has certainly clinched a playoff spot, but a Top 8 finish and its corresponding home game is FAR from guaranteed.  The Indians play Middletown in Week Ten, which will not give them many points.  #8 Elder and #9 Colerain are BOTH guaranteed to jump over Fairfield if they win, meaning that if Fairfield wants to host a first-round playoff game, it would require EITHER an Elder loss OR a Colerain loss.  Unless Fairfield jumps #6 Milford, but that’s extremely unlikely.  The only way Fairfield jumps Milford is if Fairfield wins, Milford loses, and Fairfield also gets wins from Lakota East, Oak Hills, Harrison, Kings, Winton Woods, Anderson, and Lebanon.  Unless Fairfield gets ALL NINE of those results, Milford will stay above Fairfield, and the Indians will have to hope to get help from either Elder or Colerain.
————————————————————————————–

Edgewood has clinched a playoff spot and controls their own destiny for a Top 8 finish (first-round home game).  If Edgewood beats Harrison, they cannot finish any lower than 7th.  Kings and Piqua have already locked in two of the Top 4 spots, and Edgewood cannot catch #3 Anderson either.  So if Edgewood wants to finish 4th and get the double-home-game, it would require #4 Teays Valley to lose to Logan Elm (3-6).  Even if Teays Valley gets upset, it is not a guarantee that Edgewood would jump over them; it would still come down to second-level points.  And even if Edgewood DOES jump over Teays Valley, a La Salle victory over Elder likely gives that 4th spot to La Salle and not Edgewood.
————————————————————————————–

Badin has clinched the #1 seed.  The game against 8-0 McNicholas will be fun.  It will be for bragging rights.  It will be for the GCL Co-Ed crown.  But it won’t be for playoff positioning (at least for the Rams…it would TREMENDOUSLY help McNick in Division IV if the Rockets win this one).  Badin will be the #1 seed in the Region 12 bracket when it comes out (unless that hypothetical scenario comes about that frees up a team like St. Mary’s Memorial to play against an undefeated Division I team and send a domino effect through ten different results).
————————————————————————————–

Monroe has clinched a first-round home game, but the loss to Bellbrook makes the path into the Top 4 much tougher.  Especially because Monroe now has to play 9-0 Eaton.  On the bright side, that matchup is worth 45.0 second-level points and would guarantee Monroe the #2 seed if they win it.  If Eaton beats Monroe, the Hornets could drop as low as 8th.  Everybody 2nd-7th is EXTREMELY bunched up right now in Region 12; it should make for a late evening of counting up points.  Big Red Hughes (currently 8th) plays 8-1 Withrow in Week Ten.  If Withrow wins that game, then no matter what happens, Monroe remains in the Top 7 and avoids a potential second-round matchup with Badin.
————————————————————————————–

A win over Edgewood would have given Ross 28.0 second-level points last week, but it wasn’t to be.  Ross tumbles to the bottom of the congested 2nd-7th race in Region 12.  But never fear.  Ross has another opportunity this week, when they play 6-3 Mount Healthy, for a chance at 33.0 second-level points.  As was previously mentioned, everybody 2nd-7th is VERY tightly bunched in this region, and the only game in that congested bunch that is worth more points in Week Ten than Ross-Mount Healthy is Monroe’s game against Eaton.  A Ross win over Mount Healthy guarantees the Rams to move ahead of Wapak and Tippecanoe and places Ross squarely on the 5-line.  From there, Ross would be guaranteed to move into the Top 4 if either St. Mary’s Memorial, Bellbrook, or Monroe were to lose.  Like Monroe, Ross has already clinched a first-round home game.  Even with a loss, the Rams cannot finish any lower than 8th, and no lower than 7th if Withrow beats Big Red Hughes.
————————————————————————————–

New Miami MUST beat Lockland to have any chance of getting into the playoffs.  The New Miami win by itself MIGHT be enough to squeak the Vikings in, depending on if they get enough losses by teams around them.  If the Vikings can get help from the two teams they’ve beaten, their odds go up dramatically.  Hilltop (who New Miami beat in Week Four) is 0-8 and hasn’t given New Miami ANY help this year.  That could possibly change this week though.  Hilltop plays against 0-7 Montpelier; a Hilltop win would be a WELCOME gift to the Vikings.  The other team that New Miami beat is MVCA.  That situation is a little more complicated because MVCA is one of the teams that New Miami is also trying to catch.  MVCA is currently 14th and has a tough game against 6-2 Cincinnati Country Day.  If MVCA wins, it clinches MVCA a playoff spot that New Miami can’t have…but…it also potentially pulls New Miami up past one of the other teams they’re trying to catch.  If MVCA loses, the Lions can potentially be caught by the Vikings, depending on the outcomes of the other games…but…it also makes it harder for New Miami to pass some of the other teams around them.  So it truly works as a double-edged sword.  And on top of that, #16 Tri-County North plays #18 Twin Valley South; those are the two teams directly in front of and directly behind New Miami.  One is guaranteed to win; one is guaranteed to lose…another double-edged sword.  #15 Fort Loramie has a REALLY tough game against 8-1 Lima Central Catholic.  A win for Fort Loramie seals off New Miami from grabbing that spot, but a loss opens the door there.  It’s going to be oh-so-tight, and we’re going to be counting up second-level points deep into the night on this one, but only if New Miami beats Lockland first.  Otherwise, it’s elementary after all.