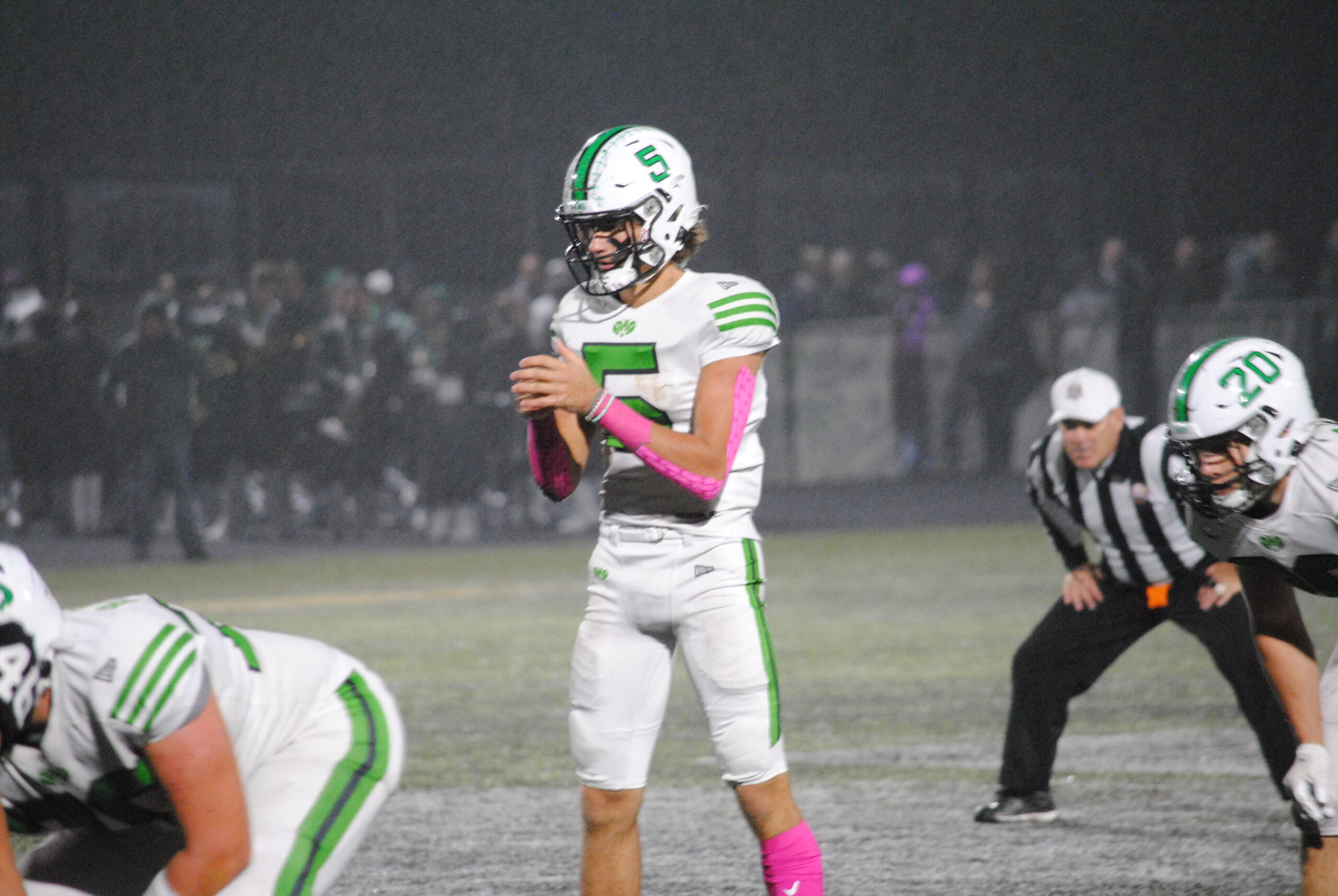 CINCINNATI — Badin football coach Nick Yordy talks frequently with his team about the importance of getting off to a fast start against opponents each week.

The Rams’ goal is to jump out to an early lead, forcing the other team to play from behind.

So, you can imagine how pleased Yordy was when the Badin Rams gained an early lead over the McNicholas Rockets and never looked back as they went on to win 48-21 becoming the 2021 GCL Co-Ed League Champions Friday night.

“The credit goes to our kids,” said Yordy. “They came out, they played hard, and they executed. I mean what a great way to start the game in that first quarter. We had a little bit of fire and a little bit of emotion and got the momentum and maintained it.”

Badin, playing on the road at McNicholas’ Penn Station Stadium, immediately grabbed the momentum when Carter Russo returned the opening kickoff to the McNicholas 21-yard line, putting his team in prime field position to start the game.

Then, on the Rams’ very first offensive play, Landyn Vidourek handed the ball off to Jack Walsh who carried it all the way to the end zone for a TD. The kick after was good and Badin held a 7-0 lead with 11:39 left to play in the first quarter.

“Carter Russo made a play on the first play of the game and got us down to like the 20 or 25-yard line,” said Walsh.“ The o-line did more than their job and I mean I just had to find the hole and run.”

After the quick score, it was McNicholas’ turn to try and return the favor. However, as easy as it was for Badin to get into excellent field position and score, it was quite the opposite for the Rockets.

In fact, it was a bit of a rough start.

On the kickoff after the TD run by Walsh, the ball popped loose from McNicholas’ kick returner when he was initially hit. Luckily for the Rockets, one of their own players was close by to grab the loose ball to prevent a turnover.

However, starting with the ball at their own 12-yard line, McNicholas was unable to gain positive yards. After two bobbled snaps caused the Rockets to move backwards in field position, they were forced to punt on fourth down from deep in their own territory.

“It was just a disastrous start,” said Rockets head coach Mike Orlando. “We had some unforced errors there, but they’re a stinking-good team, man. I honestly think they’re going to contend for a state title. You’ve got to be on it to beat teams like that. We just weren’t on it tonight. My hat’s off to Badin and Coach Yordy, he’s done a fine job.”

While it may have been disastrous for McNicholas, it was anything but that for Badin. The Rams added two more rushing TD’s by Walsh to go up 21-0 before the end of the first quarter.

Then, early in the second quarter, the Rockets completed a scoring drive of their own when Pierce Taylor threw a TD pass to Ben Bobo making the score 21-7.

However, McNicholas turned the ball over on their next drive when Braedyn Moore intercepted a pass near the 50-yard line. A few plays later, with the ball at the 1-yard line, Vidourek handed the ball off to Walsh who carried it into the end zone for his fourth TD of the game, making the score 28-7 before the end of the first half.

“It sure is awesome,” said Walsh. “I owe all the credit to the defense and special teams for good field position and the o-line making it easy for me.”

After halftime, the Rockets received the kickoff and put together a drive that resulted in a TD when Pierce Taylor handed the ball off to Ty Snyder who carried it into the end zone from the 1-yard line bringing the score to 28-14.

After that, McNicholas was able to force Badin to punt. But the Rockets’ drive was cut short when Braedyn Moore snagged his second interception of the game, this time a pick-6 that brought the score to 35-14.

The Rams added another score late in the third when Walsh carried the ball into the end zone from the 1-yard line for his fifth TD of the game making the score 41-14.

Although the game appeared to be out of reach for McNicholas, they continued to battle. On their next drive they moved the ball methodically down field and got within striking distance of the end zone. Then Pierce Taylor tossed a TD pass to Tyler Hynes to make the score 41-21 with just over 11 minutes to play in the game.

Then, when Badin took possession on their next drive, they added their final score of the game with a crisp pass from Vidourek to Eric Rawlings giving the Rams a 48-21 lead.

“We knew we were going to be in for a battle,” said Yordy. “Despite the score, that was a back-and-forth game and those guys wouldn’t quit. That’s a really good football team. I think they’re going to make a heck of a run here.”