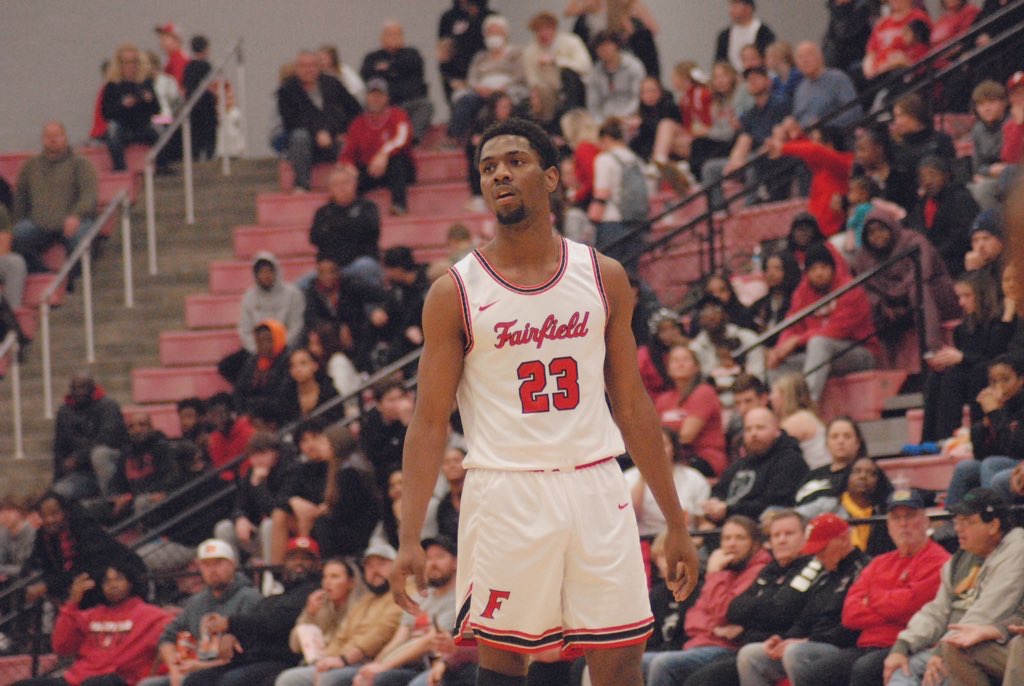 FAIRFIELD — Mason King got it all started on Friday night.

The rest of the Fairfield High School boys basketball team finished it.

King threw down a monster dunk in the first two minutes to rile up the home crowd, Deshawne Crim scored a team-high 19 points and Fairfield went on to beat short-handed Sycamore 64-54 to remain undefeated in the Greater Miami Conference.

“It was the first one of the season,” King said of his transition jam that got a packed Fairfield Arena rocking and gave the Indians a quick 4-0 lead. “It was an amazing experience.”

Fairfield (12-2, 9-0 GMC) has won five in a row and owns a two-game lead over Princeton in the conference standings.

Sycamore (9-3, 6-3 GMC) had its six-game winning streak snapped and played without leading scorer and big man Raleigh Burgess, who broke his leg at practice on Thursday.

“They are talented, and they play hard,” Indians coach DJ Wyrick said of Sycamore. “They were physical and are really disciplined. That’s a good team. That team is going to win games.

“I know a lot of people were down with the loss of Burgess, but they’re still a really good team,” Wyrick added. “So that was a big win for us. You have to give credit to them for maintaining focus. It would be easy for you to be down on yourselves for something like that to happen to your team. But their kids stayed focus, played hard and played the right way.”

Sycamore coach Tim Austing said the last two days had been hard to digest as a program.

But an emotional Austing was still impressed with the way his Aviators battled after gaining knowledge that one of the best players in the area will be out for the rest of the season. The highly recruited Burgess was averaging 14 points and 9.5 boards a game.

“I told the kids that it’s going to be a great game no matter who we have out or who they have out,” Austing said. “If you’ve been at these games the last two years, it’s been some of the best games in the city. … We missed Raleigh, but the guys that we had out there had chances, and they played hard. We just came up short.”

Last season, Fairfield and Sycamore split a pair of games that were each decided by a point.

Ray Coney scored 12 points for Fairfield on Friday, while King finished with 11. Big man Aamir Rogers registered a double-double with 10 points and 10 rebounds.

The Indians went on a 14-3 run in the first quarter and eventually built their largest lead at 25-11 on a Coney bucket with 6:39 left in the second period.

“We built the big lead early when they were in their man to man,” Wyrick said. “They went to that zone, which zone is going to slow you a little bit. They’re running zone because they know they don’t think they can stay in front of you. They’re trying to slow you in transition some.

“You look late into the game, they had to come out of that zone and get back into the man,” Wyrick added. “That’s where our guys really excel. That’s when Crim can make plays. Ray Coney can make plays. We’ve got shooters that can space the floor. Aamir can obviously finish inside and establish his presence in there for us.”

Sycamore senior guard Austin Southerland, who finished with a game-high 21 points, knocked down a 3-pointer to pull the visitors to within 51-47 to close out the third quarter.

KING FOR THE DAY

Wyrick said King was a game-changer on Friday. The junior had a career game by scoring all of his 11 points in the first half.

“Mason stepped up for us,” Wyrick said. “He had a really big game for us. He really impacted the game — effort plays, rebounding, defending. Mason gave us another element in terms of being able to guard multiple positions. He’s that talented. If he can maintain this level of focus, he can be an X-factor for us moving forward.”

When asked about King’s rim-rattling dunk in the first quarter, Wyrick said, “That was really good. I was happy for him. That dunk really got him going. … I’m proud of the way he came out and played — just a lot of effort and toughness.”

Fairfield takes on Richmond Heights in Flyin’ to the Hoop at Kettering Fairmont on Monday at 11:30 a.m., while Sycamore hosts St. Xavier on Tuesday at 7:30 p.m.