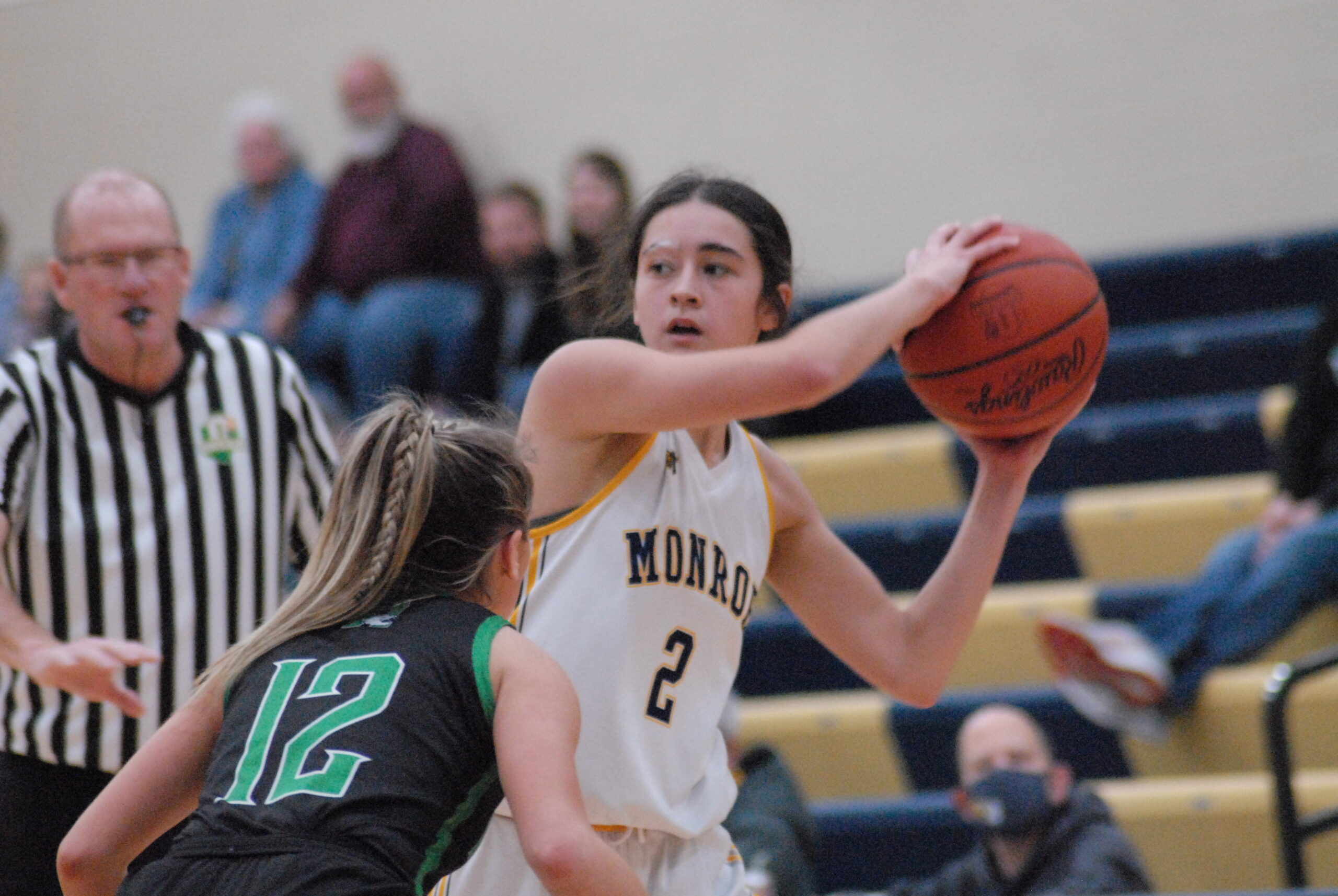 MONROE — Chad Adolph saw an improvement out of his Monroe High School girls basketball team on Monday night despite the outcome.

“We’re getting better at focusing on the process,” the coach said. “Not the result.”

The Hornets held Alli Robertson — the Southwest Ohio Conference’s leading scorer — to under her season average and was able to hang with a tough Harrison squad through three quarters before surrendering a 51-37 non-conference defeat.

“We want our kids to continue to be consistent in showing up,” Adolph said. “They know that putting the work in will eventually make good things happen.”

The Hornets had won three out of the last four contests against the Wildcats heading into Monday. Harrison has now won seven out of its last eight games on the season.

Monroe (5-12) got an early burst from Saffron Weidner, who scored 12 of her team-high 15 points in the first quarter to help give the Hornets a 15-12 lead. The junior knocked down five 3-pointers.

“I was really happy to see Saffron challenge herself,” Adolph said. “She’s upping the confidence and stepping up to being a leader on the floor.”

The Wildcats (13-3) took the lead during a 12-0 run that was capped off by a Robertson trey to make it 24-17 with about 3 minutes left in the second quarter.

Robertson, who finished with a game-high 22 points, came in averaging 24.3 a contest.

“You have to tip your hat to a kid like that who was just an absolute monster on the inside,” Adolph said of Robertson, a sophomore. “I thought she was very patient on the inside. She handled herself really well. Yeah, we held her under her average, but she still got 22 on us.

“If you love the game and you respect it enough, you’ve got to acknowledge great basketball,” Adolph added. “She played a great game.”

Monroe, which kept things close following the halftime break by using a full-court press, pulled it to within 34-29 on a Jordan McComas bucket nearing the end of the third quarter.

But that gassed the young Hornets.

“I thought our press caused some havoc for them. That’s been a staple of ours for a few years now,” Adolph said. “We really believe with our youth that we have some speed to replicate what we’ve had in the past. … We just got too tired.”

Harrison pulled away in the fourth quarter by taking advantage of seven Monroe turnovers.

“It’s the beautiful thing about the game — the runs and how you’re going to respond,” Adolph said. “They throw a punch. You’ve got to throw a punch back. How are you going to take it?

“We’ve been battling the turnover battle all season long,” Adolph added. “We’re trying to learn from that and value every possession.”

Freshman Emma Adolph had seven points for the Hornets, who only went 2 of 4 from the free throw line. Sophomore Maggie Seiter scored 10 points for the Wildcats.

Adolph continued to praise his Hornets’ efforts on the defensive side of the ball Monday.

“I really like our full-court pressure,” Adolph said. “I saw some flashes of great team basketball right there.”

Monroe manned the press mainly during the second half, but Adolph said his program has to limit the turnovers and get some more productivity off the bench “if we want to continue with the full-court.

“We’ve got to clean up the turnovers come tournament time,” Adolph added. “Right now we have to build on the good and keep focusing on cleaning up the mistakes — improve every day.”