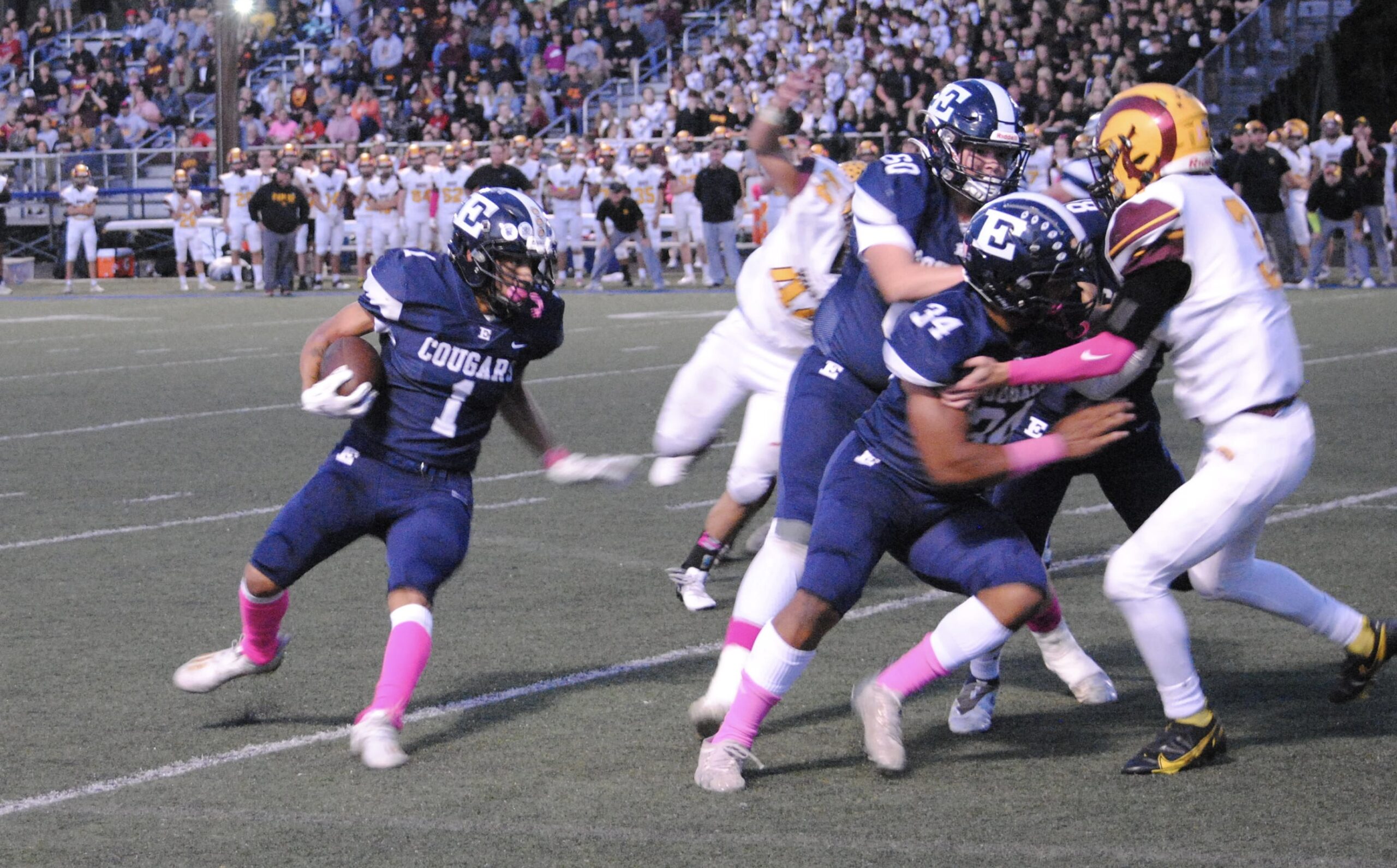 ST. CLAIR TWP. — Fridays aren’t just paydays for those who punch the clock working nine to five jobs every week.

According to Edgewood Cougars coach Scott Clemmons, they’re also paydays for the football teams that go to work each week preparing to defeat their opponent under the bright lights on Friday night.

And while the players aren’t compensated for their hard work with a paycheck or a quarterly bonus, their reward is cashing in with a victory over a conference rival and another check in the win column.

And that’s exactly what the Edgewood Cougars did when they captured four turnovers and showed no mercy as they defeated the Ross Rams 42-0 in front of their home crowd at Kumler Field to bring their record to 6-2.

“We always tell the boys each day of practice is like a workday for a pay day,” Clemmons said. “Fridays are pay days. And the work you see these young men put in, just how zeroed in they are during the week of practice listening to coaches, understanding the gameplan and where they have to be and stuff like that. This group really takes it to heart and does a great job, and then they get the fruits of their labor on Friday night and we got to see that again tonight.”

With the Cougars celebrating their win on senior night, the Rams (6-2) were left disappointed. And while they were without a few players due to injury, Ross coach Kenyon Commins said he didn’t want to make excuses and instead gave credit to Edgewood.

“Anything I say is going to sound like an excuse,” said Commins. “And the bottom line is they’re just the better football team tonight. That’s it. There are no other things you can say.”

Neither team could manage to put together a scoring drive in the first quarter. The closest either team came was on a drive by Edgewood that was setup by a Ross muffed punt return.

The Cougars recovered the ball at the Ross 21-yard line and drove all the way down to the Rams’ 1-yard line. On fourth-and-1 Edgewood opted not to kick the field goal and instead showed confidence in their offense to score.

But the Rams’ defense held strong and kept the Cougars out of the end zone forcing a turnover on downs.

Then, in the second quarter, the scoring began.

After forcing the Rams to punt, the Cougars put their first points on the board when quarterback Eli Jones dropped back and delivered a crisp, high-arching pass to Braden Sullivan who carried it all the way to the endzone for a 70-yard TD making the score 7-0 with 10:22 to go in the second quarter.

“It was a great win,” said Jones. “I’m proud of each and every one of these guys and I would ride or die for them.”

Then, on Ross’ very next drive they fumbled the ball, and it was recovered by Edgewood at their own 42-yard line. The Cougars finished off that drive with a rushing TD by Jones putting the score at 14-0 with 6:35 left in the second quarter.

The Rams again struggled to mount a successful drive after getting the ball back and were forced to punt with Edgewood taking over at their own 42-yard line. A few plays later the Cougars made their way into the endzone again. This time it was a TD run by Jay Dailey to make the score 21-0 with just a few seconds left to play in the first half.

When both teams returned after halftime, Edgewood continued their dominance.

After Ross failed to convert on fourth down, Edgewood took over at their own 40-yard line. They moved the ball deep into Rams’ territory and capped off the drive with a 1-yard TD run by Tavionne Crosby to make the score 28-0.

Edgewood’s next score came after Brick Baker intercepted a pass that was then knocked loose and recovered by teammate Jake Valerio at the 17-yard line. From there, the Cougars would finish off their drive with a 5-yard TD run by Tavionne Crosby putting them ahead 35-0 with 1:36 to go in the third.

The Cougars sixth and final touchdown came via a fumble recovery by Baker who picked up the loose ball and returned it 85 yards for the score making it 42-0.

“It was a team effort,” Baker said. “We had to work together as a unit. We had to pound them in the mouth every single second and we have a saying that once we start, we can’t stop.”