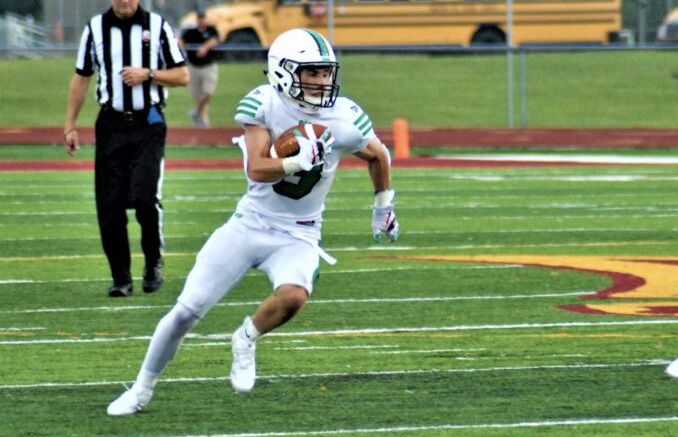 This was the third time in a row the Rams beat Alter dating back to last season.

Coming off an impressive win last week against Ross, the Badin Rams wanted to continue the streak against Alter.

“You know they beat us 22-straight times,” Vidourek said. “We were preaching all week that we wanted to start our own streak.”

The previous week the Rams offense was efficient, but this week that was not the case. Early on, the offense could not take advantage of the opportunities created by the defense and special teams.

“I think we struggled offensively, and our youth kind of reared its head a little bit,” Badin coach Nick Yordy said.

At the beginning of the second quarter, Alter quarterback Brian Shane threw an interception intended for Patrick Connor. Badin defensive back Andrew Hegemann stepped in front of Connor, returning the ball to Alter’s 25-yard line. The Rams’ offense had gone backward, accruing a penalty and negative yardage. Badin gambled to go for it on fourth down but fumbled the ball, and Alter’s CJ Hicks recovered it at Badin’s 48-yard line.

Alter took advantage, turning the turnover into a Jack Ruffalo field goal from 32 yards out.

Badin was able to finally get on the board its next drive. Starting from their own 30-yard line, the Rams drove down to the Knights’ 1-yard line. Vidourek scored on the quarterback sneak for the 7-3 lead with 55 seconds left in the second. Vidourek’s 39-yard pass to Moore set up the play.

Badin got the ball back on the ensuing kickoff after a CJ Hicks fumble at Alter’s 10 yard-line. Badin could not take advantage on missed field goal.

Badin’s offense was shut out during the third quarter, and Alter was grinding down Badin’s defense. Alter’s Brian Shane scored on a 60-yard touchdown with 1:48 left in the third quarter for the 9-7 lead. The Rams’ special teams helped on a Ruffalo blocked kick to keep it close.

Alter’s momentum carried into the fourth quarter with its running game. Hicks made two key runs on the Knights’ next drive for 16 and 36 yards, setting up Ruffalo’s second field goal of the game for a 12-7 lead with 8:11 left in the fourth quarter.

With its short-streak hanging in the balance, Badin’s momentum swung tremendously after Alter committed a holding penalty with 4:49 left in the fourth. The Rams were at Alter’s 27-yard line with 4:49, it was third and 7 after Carter was stopped at the line of scrimmage for no gain.

Then the penalty happened, and two plays later Moore scores the game-winning touchdown.

Badin still needed help from its defense and special teams unit. Vidourek punted the ball and got a friendly roll to Alter’s 1-yard line. Alter had 24 seconds for a miracle, but Shane’s pass was picked off by Max Lauer to seal the victory.