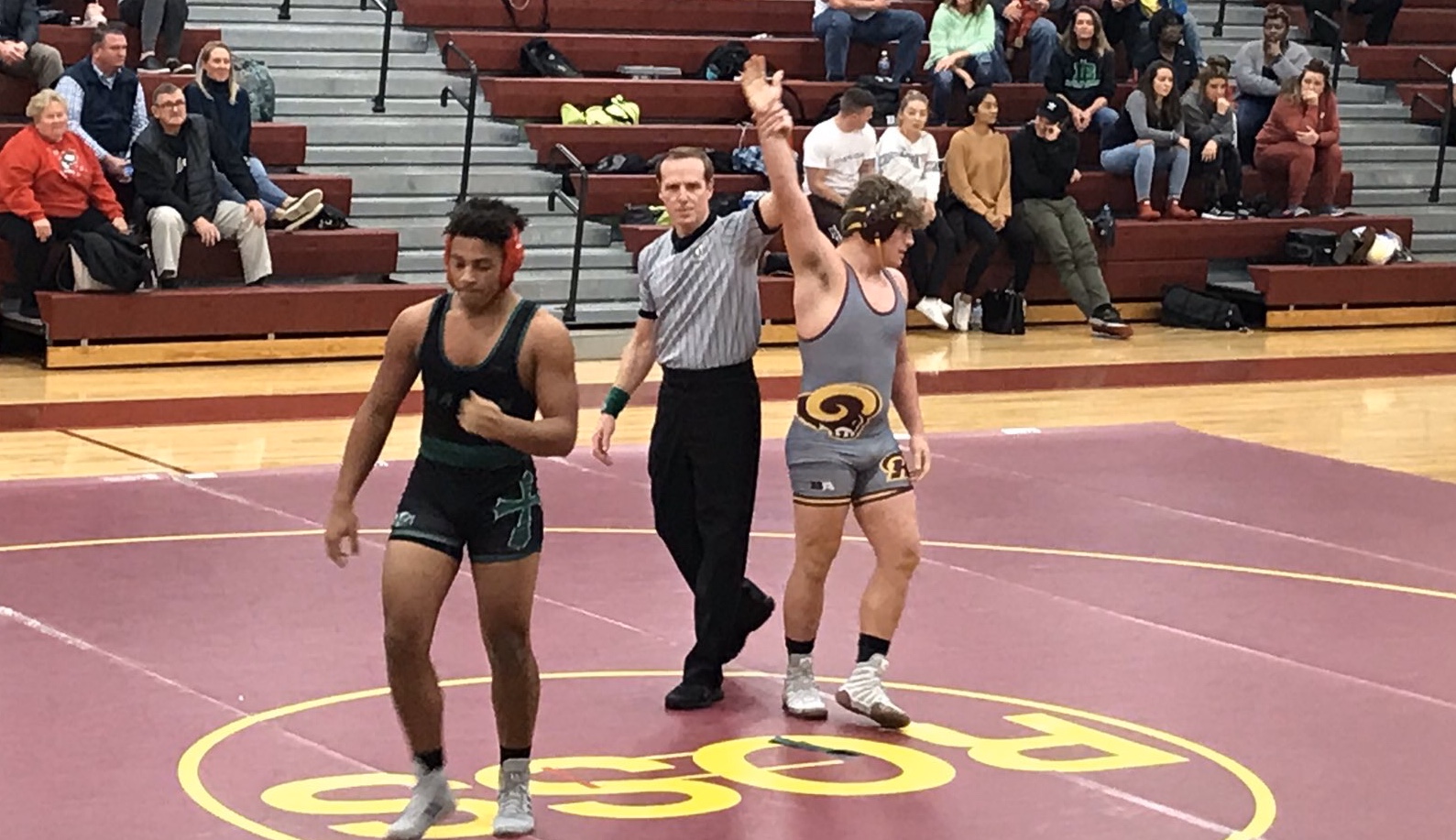 ROSS TWP. — Ever since Dexter Carpenter built the Badin High wrestling program from scratch over 15 years ago, Badin had never defeated Ross.

That all changed on Friday night as the Badin Rams took down Ross 48-32 in a dual at Ross Middle School.

“The kids worked hard, I was proud of the kids. I had to move all of our girls up one weight class, which is crazy to do against the boys,” Carpenter said.

The tone of the match was set when Badin’s Brooke Weisbrodt pinned Connor Linz of Ross in the final seconds of the match.

“She only weighed 110 pounds, I moved her all the way to 120 pounds,” Carpenter said. “When she got that pin, that changed the math a little bit.”

Linz dominated the majority of the match, but Weisbrodt was able to flip the script and shock Ross, giving Badin an early lead.

In the 152-pound weight class Ethan Emmons, a Badin captain, rode that momentum and took control early. He ended up pinning his opponent Ethan Boyle of Ross in 45 seconds.

Ross was able to keep the dual close, however. Ben Breaker (138 pounds) and Jude Hess (182) both won by fall. Returning state alternate Sean Beltran won by a major decision of 12-2.

Ross coach Rich Dunn would have liked to see his team capitalize on their opportunities more often.

“Each one of those matches where we had leads, and then we ended up not only losing the lead, but getting pinned. You can’t win matches that way,” Dunn said. “If you’re winning you need to finish the job, and we just didn’t finish the job.”

It was the 195-pound match between Ross’ Hayduke Hess and Badin’s Johnathan Palido that decided the final outcome. Hess took an 8-7 advantage into the final period, but Palido was able to come from behind and pin Hess, clinching Badin’s first ever win over Ross.

“You gotta give it to the Badin kids, they were in matches where they were getting beat, we were handling them and they fought through and got themselves in the position to not only win, but get the pin,” Dunn said.

Carpenter is going through his final season at the helm as Badin’s head wrestling coach. He grew emotional speaking about this huge victory.

“I started the program fifteen seasons ago, I’m the only coach the programs ever had, and I’m retiring this year,” Carpenter said. “They said they wanted to do it for me. These kids. Wow.”

Dunn is in his 29th year heading Ross’ wrestling program. He spoke about Carpenter and the respect he has for him.

“I don’t know exactly how many head to head’s we’ve had, but we’ve been going at it a long time,” Dunn said. “Dexter’s a great guy. He’s done a great job there, he’s built that program from the ground up. He does everything the right way with the kids.”

Badin will ride this momentum into the Bulldog Invitational on Jan. 4 at Milton Union Middle School.

Ross will compete in the Fairfield Invitational at Fairfield High School on Jan. 11.