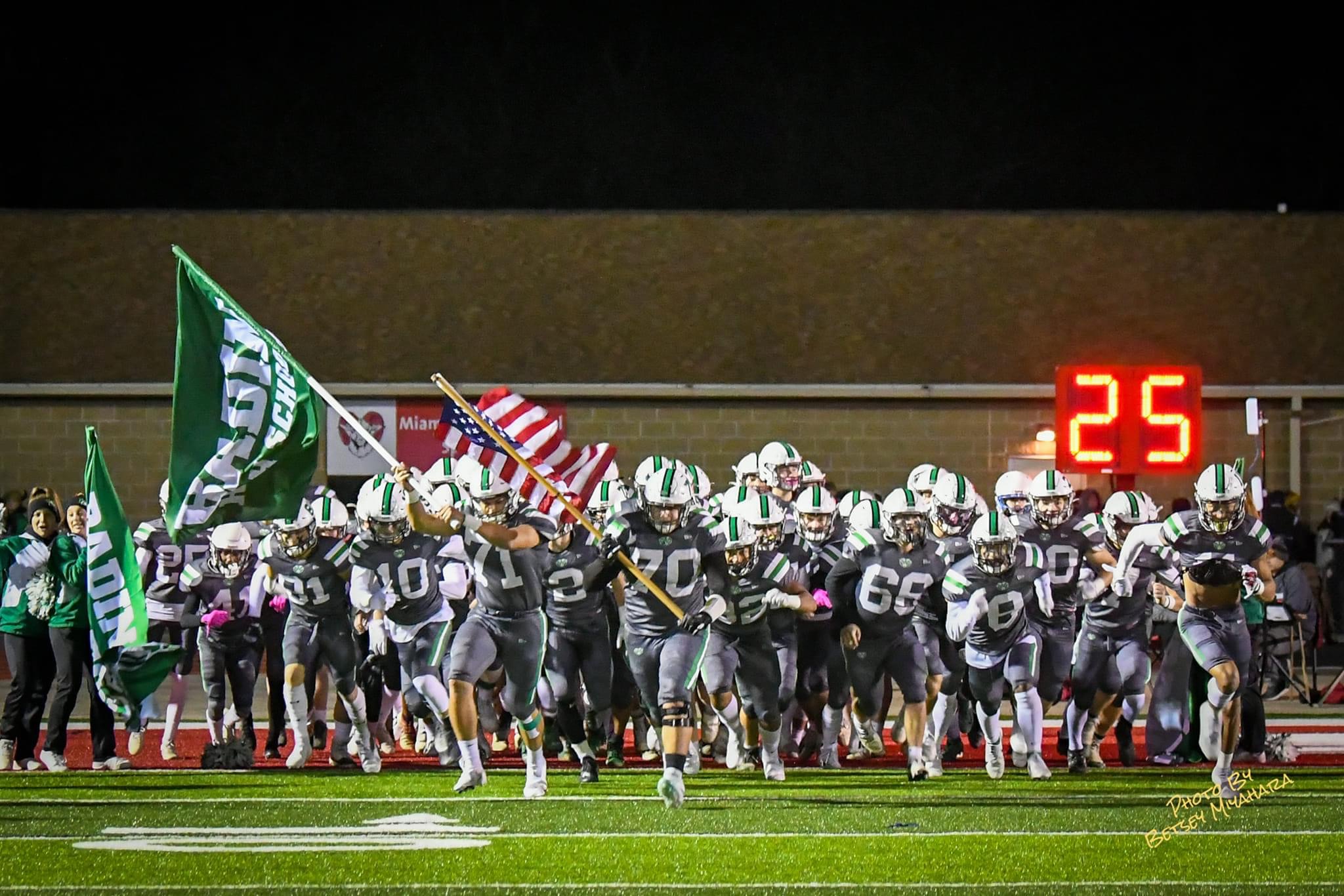 LONDON — When Badin’s Landyn Vidourek succumbed to injury in the Regional Final against Bellbrook last weekend, all eyes rightly turned to the “next man up,” Alex Ritzie.  But what all eyes DIDN’T immediately turn to was the realization that replacing Vidourek would require TWO “next men up,” as Vidourek was also the team’s punter–a VERY important position for a team who likes to rely on defense and field position to win games.  And so while Ritzie performed admirably in his first start, and running back Jack Walsh took on as big of a workload as anybody in a high school football game has all year, proper accolades must also be given to Vidourek’s OTHER replacement, junior punter Reese Anzalone, who played a key role in his team’s 14-0 victory over Granville on Friday night at London’s Bowlus Field.

Anzalone and Vidourek had put in long hours practicing their punting game together through the summer.  Vidourek, a senior, got the nod from Coach Nick Yordy, and led the GCL Co-Ed in punting yardage and punts inside the 20 this season.  Yordy knew after Vidourek’s hand injury in the Bellbrook game that Vidourek would not be available as a quarterback for the state semis, but he still held out hope early in the week that Vidourek could still be used in the punting game.  Once that proved to also not be a possibility, it was “next man up,” and Yordy told Anzalone that it was “his time to shine.”  And shine he did.  Anzalone, the younger brother of former Badin punter Rocky Anzalone, had six punts for 214 yards, and three punts inside the 10, playing a CRUCIAL role in pinning back what Coach Yordy described as the “explosive offense” of the previously undefeated Granville Blue Aces (13-1).

Granville was indeed a formidable opponent in terms of size and speed, as well as a senior quarterback (Carsyn Crouch) with a rocket arm.  The Blue Aces were the only undefeated team in Region 11 this season, and they averaged over 35 points per game over their 13 wins coming into their matchup with Badin.  They had scored 45 or more points five different times.  And after stopping Badin’s opening drive at Badin’s own 20 yard line, Anzalone ripped off a 50 yard punt to give Badin’s defense a long enough field to absorb Granville’s best shot.

Granville’s best two offensive drives were their first two.  The Blue Aces moved the ball across midfield and converted a 4th and short on their first drive to get to the outskirts of field goal range.  Badin’s Kaden Starks broke up a 3rd-and-2 pass, and Badin’s Braedyn Moore made an open-field wrap-up tackle on a wide receiver screen (Granville’s most effective play) to stop the Blue Aces’ first drive.  Anzalone’s next punt started Granville at their own 28 yard line, again giving the Badin defense the room they needed to absorb the “shock-and-awe” of Granville’s passing game.  Crouch threw a frozen rope of a pass to leading receiver Christian Hilton (6 catches, 85 yards) to set up the Blue Aces in scoring position.  Granville got the ball as far as the Badin 14 yard line, their deepest penetration they would get all game long.  The drive stalled after a costly intentional grounding penalty, followed by a Davidson Jump missed 38-yard field goal.

Badin quarterback Alex Ritzie, a sophomore making his first varsity start, was not asked to do too much.  He finished a modest 7-for-13 for 64 yards, but his best throw of the game came on Badin’s third offensive drive.  On a 2nd-and-1, with the Blue Aces’ defense keying on running back Jack Walsh, Ritzie launched a 37-yard bomb down the left sideline to wideout Braedyn Moore, who outjumped his man in man coverage, and came down with the ball at the Granville 3 yard line.  Walsh would punch in a touchdown run on a running back direct snap on the very next play, and Badin would have a lead that it would never relinquish.

Moore would help to flip field position with an interception on Granville’s next drive, but Badin would be unable to capitalize offensively.  With a bad snap causing the drive to stall at midfield, the Rams would ask Anzalone to pin the Blue Aces deep.  Anzalone’s extremely close friend, long snapper Cameron Wright, gave Anzalone a tricky high snap that took an extremely athletic play to come down with.  Unrattled, Anzalone blasted a 47-yard punt which rolled dead at the 4 yard line, and the Badin defense began the slow and painful boa constrictor squeeze of the Granville offense.

A Logan Neu sack forced a Granville punt, and Badin began the 8-play drive that would be the turning point in the game.  Working the clock, mixing up Jack Walsh runs with a couple of short Alex Ritzie passes, the Rams found themselves staring at a 4th-and-2 on the 22 yard line with 40 seconds left.  Again, Yordy called the running back direct snap to Walsh, who ran off-tackle to the left, and found daylight for a 22 yard touchdown run.  Badin took a 14-0 lead into halftime, and was just one more defensive stop from complete demoralization of the Aces.

The traditional Wildcat formation involves a quarterback lining up at wide receiver, a man in motion to force the defense into playing assignment football, and lots of misdirection.  This was not that.  The quarterback was often off the field completely, nobody was going in pre-snap motion, and most of these runs were straight ahead.  (Picture DeAngelo Williams 2006 Carolina Panthers vs. the Falcons, instead of Ronnie Brown 2008 Miami Dolphins vs. the Patriots.)  Coach Yordy said, “with Jack back there, and Braedyn Moore as a lead blocker, sometimes you just have to do what you have to do to win a football game.”  Badin did “do what they had to do,” and they received nothing short of a Herculean effort from their star running back.  Jack Walsh finished with an astonishing 43 carries, for 226 yards and the two touchdowns.  For comparison, only once in the entire season did ANY running back for ANY GCL Co-Ed team carry the ball more than 25 times in a game (Chase Stone, 31 times in one game for Alter).

Down by two scores and with the third quarter draining from the clock, due to Walsh’s running game, Granville’s highly-vaunted offense became one dimensional, and Yordy’s defense was able to “pin their ears back.”  Hunter Harrison and Logan Neu’s relentless pressure in the backfield caused multiple slip-and-falls from Carsyn Crouch the quarterback, and Kaden Starks ended one Granville drive with back-to-back sacks himself.  With sack yardage being deducted from a quarterback’s rushing yardage in high school football, Crouch ended up with 5 carries for -41 yards.

Badin was frustratingly unable to add any more points to their lead and extend it to three scores.  At one point, a potential 18-yard field was turned into a 36-yard attempt, due to a chop block and a false start.  But good clock awareness, tough defense, and a big advantage in field position throughout the second half put Badin in position to win.  A last desperation attempt for Granville came with less than a minute left, when the Blue Aces sent all eleven men in on an all-out punt block.  Anzalone handled the snap and got the quick kick away, once again getting the ball to roll dead at the 4 yard line.  Asked after the game what an 11-man punt rush felt like, Anzalone simply smiled and said, “Bring it on.”

The Rams (14-0) will travel to the Tom Benson Hall of Fame Stadium (formerly Fawcett Stadium) in Canton next weekend, to take on the Chardon Hilltoppers (15-0) in the Division III State Final.  The game will be on Friday at 3 pm.  It’ll be an opportunity for Badin to win its first state championship since 1990.  Chardon is the defending Division III state champion, is on a 27-game winning streak, and hasn’t lost a game since November of 2019.  None of this will be easy, but Badin fans can only hope their Rams take on Reese Anzalone’s attitude: Bring it on.