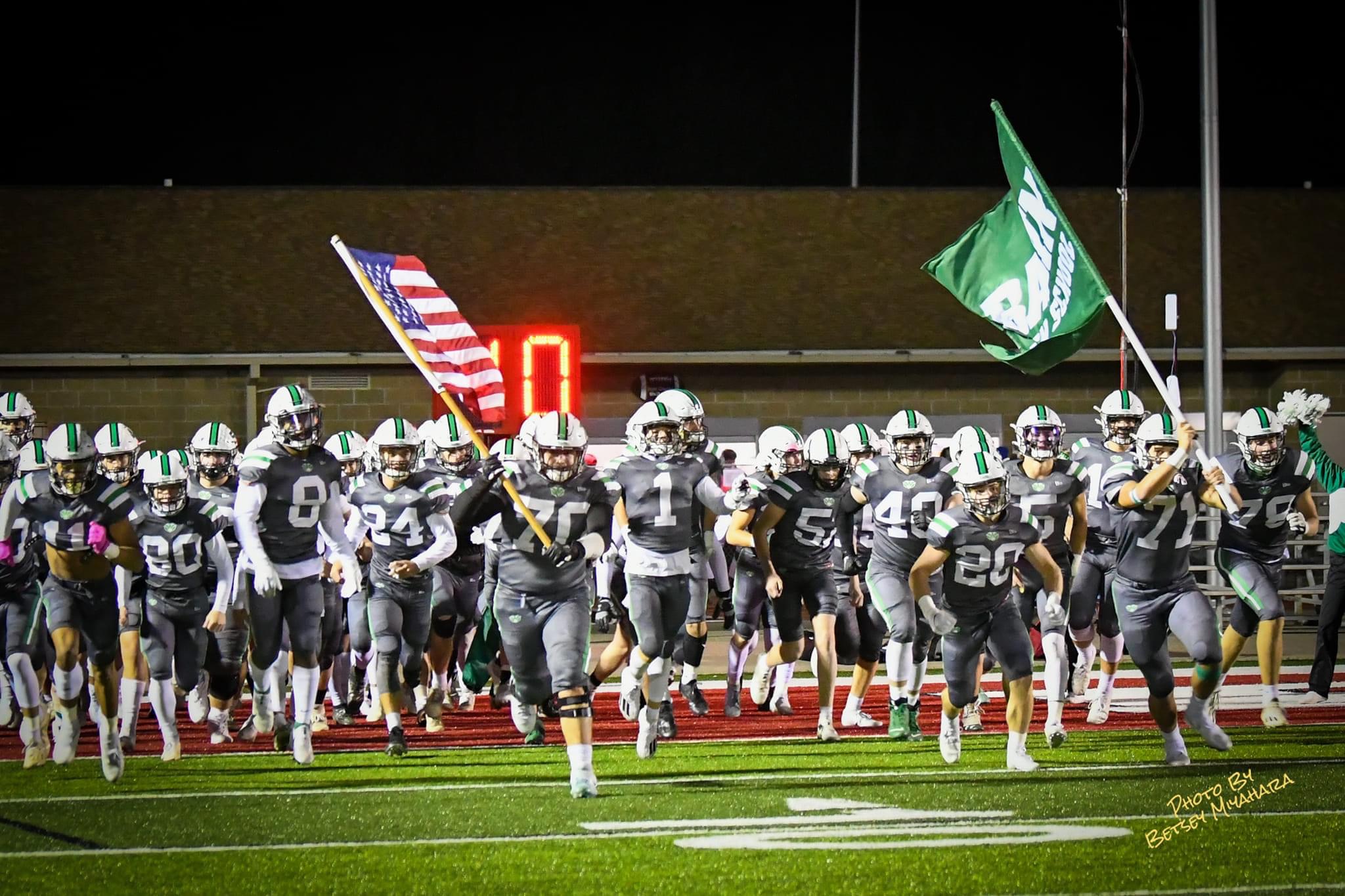 TROTWOOD — The Badin football team defeated St. Mary’s Memorial 45-10 with the efforts of all three phases of the game on Friday.

On a wet and cold night, Badin (12-0) had no problems handling St. Mary’s. On the Rams’ first drive, they marched 66 yards down the field with a 5-yard touchdown pass from Landyn Vidourek to Brady Imhoff.

The Roughriders answered back, scoring an 82-yard touchdown return by Braeden Hemmelgarn to tie it 7-7.

The Rams scored the next 10 points for a 17-7 lead, all before the end of the first quarter. Braedyn Moore, who made huge contributions on defense, extended the Rams lead on a 63-yard punt return for a touchdown late in the first quarter.

“As soon as I caught the ball all I seen was green, and I just took off,” Moore said.

The offense and special teams were clicking on all cylinders, but the calling card of the Rams all season has been the resiliency of their defense — which was well documented during this game.

Badin’s defense is anchored by Logan Neu, who had two sacks. In the second quarter, Neu sacked Gavin Reineke for a six-yard loss on third down, forcing the Roughriders to punt deep into their own territory.

“All week they [Badin Coaches] were preaching that we got to get a good initial hit on these guys upfront,” Neu said.

The Rams’ sideline was fired up after that play, with the momentum carrying over to the offense. Badin’s next drive started on St. Mary’s 44-yard line. A 19-yard run by Jack Walsh on second down placed the Rams at the Roughriders’ 21-yard line. The next play, Vidourek lofted the ball up to an open Cooper Fiehrer for the touchdown in the back of the end zone. The score gave the Rams a commanding 24-7 lead with 1:25 left in the second quarter.

“It was something we scouted in the film all week, and we knew it was going to work,” Vidourek said.

St. Mary’s began to show some trickery that caught Badin’s defense off guard. The Roughriders switched from Reineke to quarterback Cody Wallace the mix things up. St. Mary’s worked in a hook and lateral play with Wallace completing a pass to Aiden Hinkle who tossed the ball to Hemmelgarn for an 18-yard gain to the Badin 34 yard-line. The next play Wallace threw the ball incomplete to his receiver, and Moore was in coverage and called for a 15-yard penalty resulting in an automatic first down for St. Mary’s. Two plays later Moore intercepted the ball in the end-zone, returning it to their own 20.

“That was a big penalty but I redeemed myself,” said Moore.

In the second half, the Rams would hang 21 more points on the Roughriders, including another touchdown pass from Vidourek to Fiehrer, putting the game well out of reach. The Rams were aided by a 41-yard touchdown by Jack Walsh, who had a game-high 158 yards on the ground.  Moore also contributed with his second touchdown and a second interception that went for six to go up 45-10 in the fourth quarter.

It was a huge win for a Rams team in convincing fashion that used every facet of their team to win this game.

“This was a huge win,” Badin coach Nick Yordy said.

Next up is a rematch with Bellbrook next Friday in the regional finals at Trotwood. The Rams beat Bellbrook 17-7 back in August.

“We’re taking it one week at a time,” added Yordy.

“They’re a real quality opponent, and we’re going to have to get back to work and watch some film on them,” Vidourek said.