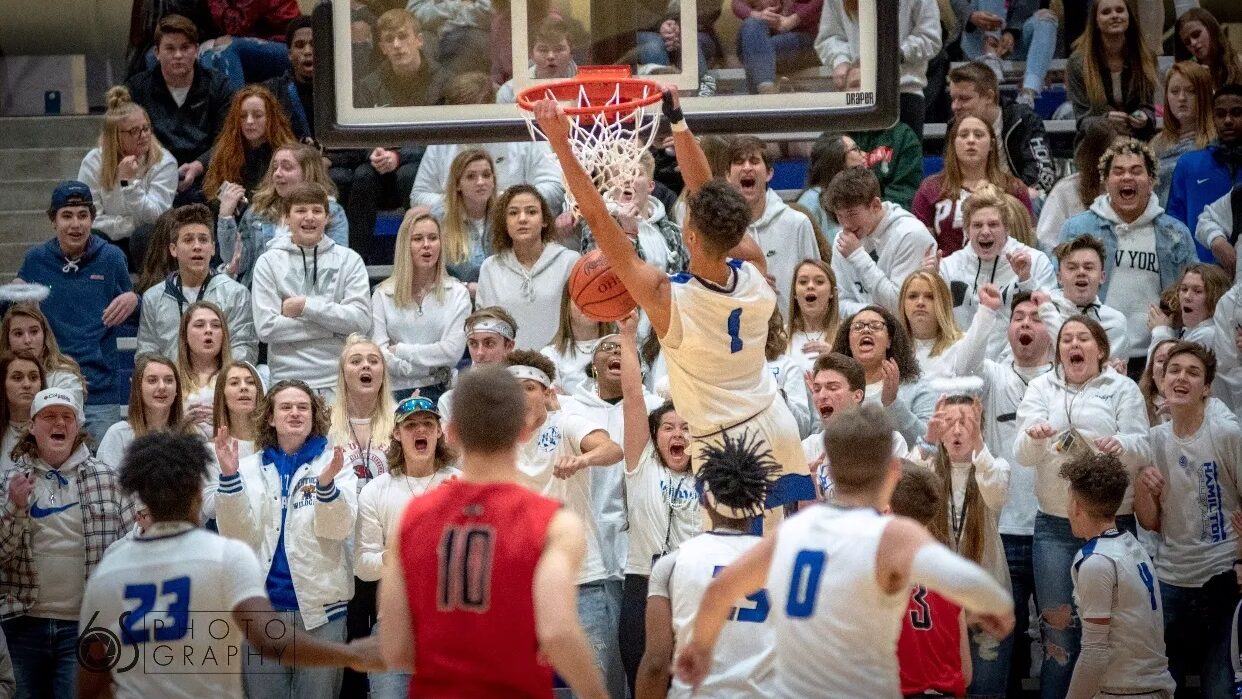 HAMILTON — A sibling is usually your first friend and likely your life-long best friend. When sports are added to the equation, a sibling will become your first opponent, but also your closest teammate.

And if you’re lucky, your sibling will actually become your teammate.

For the last two years, Hamilton High’s Jaylen and Trey Robinson have lived the sibling dream of playing together on the basketball court.

That dream became a vivid reality in one play on Friday, Jan. 4 when the Big Blue faced Lakota West.

On a fast break, Jaylen raced ahead of the defense — and without looking — lofted the ball up to his younger brother. Trey caught the ball in mid-air and slammed it home with authority — sending the home court to their feet.

The alley-oop was executed with practiced precision. So perfect, in fact, that on court communication wasn’t needed. It was innate. A symbiosis that was forged through years spent playing together.

“We’re always throwing it up to each other,” Jaylen said. “Growing up, our dad coached us in little league basketball, but high school, this is my second year playing with (Trey). It’s nice getting to play with him, this is my last year playing with him in my life, so you know I’m going hard at it every game.”

“We definitely have that chemistry to us especially that alley-oop,” Trey chimed in. “When we were younger we played with each other but there was a little gap where we didn’t play with each other, but we picked it back up when we came to Hamilton.”

Having the pleasure of coaching the Robinson brothers is Big Blue first-year coach Kevin Higgins.

“They’re highly competitive kids and they’re really good kids off the court,” Higgins said. “They do the right things in school.

“It’s kind of fun seeing, obviously my first year with Trey moving up to varsity and Jaylen on varsity,” Higgins added. “I think they have done a good job over the last few weeks of playing together, practicing together, and pushing each other.

“I remind them in practice and during the day because they’re really competitive — ‘you’re brothers. Love each other. You’re brothers, act like brothers,’” Higgins continued. “I think they’re showing some pride in each other’s success.”

That success has manifested itself through another dream. The dream of playing at the next level.

Jaylen will be playing next year for Northern State, where he will major in sports marketing. Trey, the junior, has already received an offer to play at Stetson. He is still deciding what he wants to major in.

The final and lasting dream the brothers share is an extended run in the postseason. Hamilton hasn’t won the Greater Miami Conference since 2007 and had its first winning season last year since that 2007 season.

The Big Blue currently sit fifth in the conference standings with a 7-4 overall record and a 4-3 conference record.

However, after a big win against Lakota East on Friday, the Big Blue gave notice to the rest of the GMC that they have their eyes on a conference championship.