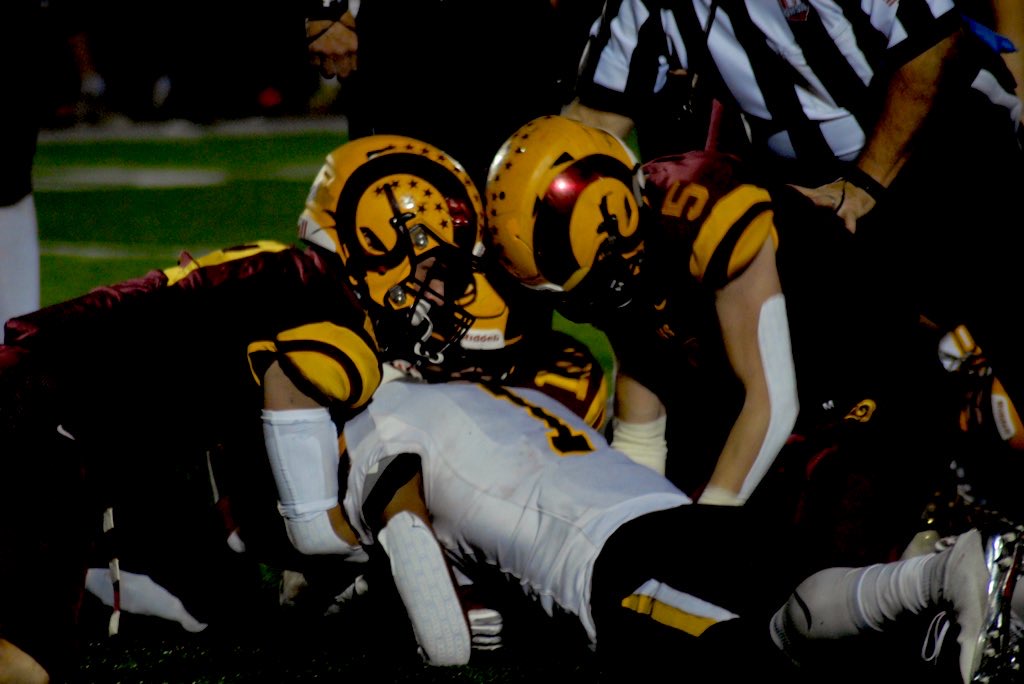 ROSS TWP. — 2020 has been a year for the ages, but around Ross Township and throughout the gossip cornered barber shops, coffee houses and scuttlebutt watering holes, the talk will be about the deepest postseason run by its high school football team in school history.

“We always talk about how the destination is the journey,” Ross High coach Kenyon Commins said. “In a year like this as frustrated as people are with the whole plight of the world they got to be something positive for this community.”

Playing in the first regional championship in school history, the Ross Rams watched an early 14-0 lead evaporate into a 35-21 loss to the Alter Knights at Robinson Field on Friday night.

Aiden Brown returned the opening kickoff 49 yards and two plays later, CJ Boze scored from 35 yards out to give the Rams an early 7-0 lead. On the ensuing kickoff, Brown recovered a fumble setting the Rams up at the Alter 44.

A 10-play drive aided by a third and short Alter encroachment penalty ended with Boze waltzing in from 8 yards out putting the Rams up 14-0.

“I love the way we started,” Commins said. “We were really excited. That’s a freshman young man who took that opening kickoff back who still has a lot to learn to get tackled by the kicker. That was a big play for us.”

“We started off, disaster,” Alter coach Ed Domsitz said. “Couldn’t have been any worse. They’re a team that they hold the ball and they maintain possession and take time off the clock. That was a real concern.”

Boze had four carries for 58 yards and two touchdowns in the first quarter, and the Rams kept the Alter offense on the sideline for 6 minutes and 14 seconds before the Knights could respond.

“In the beginning, we could not stop that quarterback,” Domsitz said of Boze. “And then when we did he pitched the ball. He’s one of the best option quarterbacks I’ve seen in a while. That kid, he’s tough to bring down and he’s just so shifty, and he’s got great acceleration.

“I like our kid, Brian Shane for what he can do,” Domsitz added.

What Shane did when Alter finally got the ball was run for 56 yards of his own on three carries ending with a 1-yard touchdown plunge. To cut the Ross lead in half at 14-7.

After forcing a Ross turnover on downs at the 36-yard line, the Knights embarked on a 14-play, 8-minute drive behind nine Branden McDonald carries for 44 yards. Antonio Murphy Jr. finished the drive with a 4-yard touchdown plunge to even the score at 14 just before the half.

“I give our kids a lot of credit for fighting back and not losing their poise in a game of this magnitude at this level if you lose your poise you’re going home and the season’s over,” Domsitz added. “I think our kids did a great job with that.”

The Knights defense stopped the Rams on fourth down twice, once in both halves and forced the Rams to punt for only the fifth time this season.

“We knew this game coming in it was going to come down to one or two stops,” Commins said. “I think they stopped us twice and that was it. We knew we were going to have a really difficult time. If you look at us up front defensively I think our two D-tackles and our outside linebacker, they were giving up about 140 pounds there.”

Eventually that Alter size advantage won over throughout the second half as the Knights continually opened up first down holes for McDonald setting the visitors up in second and short situations.

McDonald led all players with 168 rushing yards, adding one touchdown, but his work in moving the sticks was key for Alter as he had eight runs resulting in a first down.

“We kind of knew that was going to be an issue once McDonald gets going,” Commins said. “He’s just a better football player than what we have and he’s a really, really gifted athlete and he did what big players do in big games. He just went off.”

Alter took the ball to start the half and with a tie score needed to set the tone, CJ Hicks took the second play from scrimmage 56 yards to give the Knights their first lead of the game at 21-14. Ross answered with a 14-play drive, and CJ Boze found the end zone for the third time to tie the score at 21.

In a game that came down to who could make the most stops, Ross was unable to stop the Alter offense. Alter didn’t attempt a punt and offensively didn’t turn the ball over, the Knights faced only two fourth downs and converted both attempts.

That’s kind of your fear when you play a team like Alter,” Commins added. “They just got guys all over the place. They just made a play. It hurts but I felt like offensively we responded pretty well, we just couldn’t get a stop there defensively.”

Alter answered the long Ross drive three plays later with a 73-yard Shane pass to Patrick Connor and never looked back. The Knights forced the Rams to punt on the ensuing drive and scoring on McDonald’s touchdown on the following drive for game deciding 35-21 score.

“I’ve been where Ross is and I understand the pain they feel on this thing, this was a heck of a team for them,” Domsitz said. “Maybe the best they had in many years. They were 10-0 a few years ago. This team may have been better. They’ve got some great kids and their program is well coached. There was no quit in either team. Both teams they just left it out on the field.”

Boze led the Rams with 151 rushing yards and all three Ross touchdowns. Shane ran for 61 yards and threw for another 93 with a rushing and passing touchdown.

The loss dropped the Rams to 8-2 to finish their season, while Alter improves to 8-2 and will face St Frances DeSales in a state semifinal matchup.

“I tip my hat to Alter. I hope they bring one back for our region. It was a good game. It was just a slugfest back and forth. I think everybody is going to sore in the morning,” Commins said. “If I’m taking some stuff away from tonight, we’re pretty excited about where our program is headed.