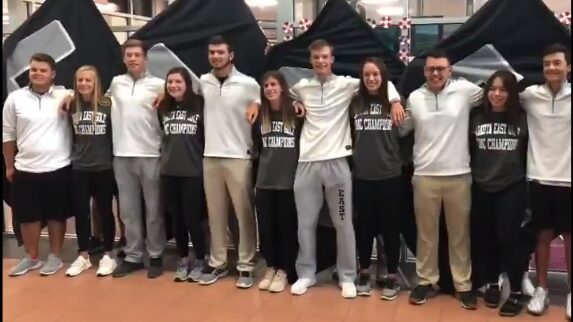 The Thunderhawks will compete in the Division I state golf tournament on Friday and Saturday, Oct. 18-19, making this the third consecutive year both programs have made the trip to Columbus together.

“We’ve got a great group of guys. These guys are a really good group of coachable kids,” Lakota East coach Jeff Combs said. “They’re buying into it, and they’re all in. These guys have been hungry since last year after finishing second place.

“These guys thought they should have won it last year, and they didn’t. So they’re hungry.”

Competing for the Thunderhawk boys team are seniors Brock Aten, Peyton Houston and Chris Poppe, along with sophomores Joe Wilson and Ty Sylla.

“We’ve worked hard in the gym and on the course,” Aten said. “We’ve been working to get to this point, and now we’re finally here.

“This feels great,” Aten added. “It feels great because I think we have a chance to get it done this year.”

Competing for the girls team, coached by Alison Green, are seniors Grace Honigford, Camryn Eddy and Andrea Davis, along with sophomores Ellie Yeazell and Samantha Bernardo.

“This is our goal — to get to state. Obviously we got there the last two years, and we wanted to get back there again,” Hongiford said. “It’s always a great experience to be able to compete against the best teams in the state of Ohio.

“We want to compete on the biggest stage in all of high school golf.”

“At the start of the year, all we try to do is get better,” Aten said. “We work on the things we know we have to rely on that can help us get to this point. And it’s worked.”