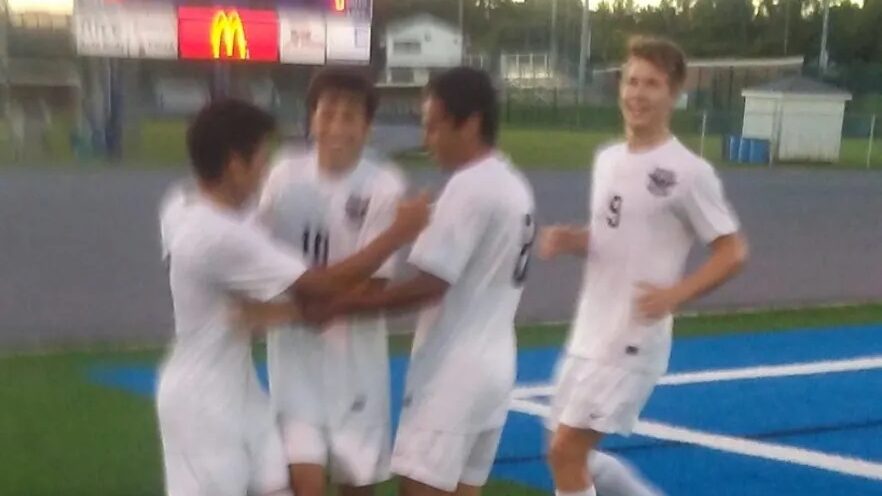 Pepe Cortez led his team with two goals, scoring his first with 26 minutes left in the opening half.

Senior Steven Voss scored at the 14 minute mark, and Cortez scored a second goal at the 9:09 mark in the first, giving Lakota East a three-goal lead.

“Pepe gives us a spark when we need it. He’s a captain. He’s a leader,” Thunderhawks coach Jeremy Hilen. “He’s the guy we count on to get those goals in those moments.”

Hamilton’s Ebiel Gamino scored Big Blue’s only goal with 7:52 remaining in the first half.

Cortez credited communication and passing that kept the game out of reach for Big Blue.

“After the first goal, we actually started getting the momentum, working as a team and talking,” Cortez said.

Despite a two-goal lead Hilen gameplanned against a potential rally in the second half amid Big Blue’s comeback tie against Lakota West.

“We remembered what happened with Lakota West,” Cortez said. “We came out strong in the second half tonight and took the game away.”

“Honestly with our team this year, I never feel like we are out of reach. Even when we are down by three goals,” Herrington said.

At the halftime break, Hilen adjusted the Thunderhawk offense.

“We adjusted some things at half time. We wanted to try to expose the weak side and switch the ball through the middle more,” Hilen said.

Herrington never felt the game was out of reach, and Hilen was worried about a comeback. Then Lakota East junior Trevor Scott scored with 37 minutes remaining in the game.

“The ball was set up on his right foot. It was the best shot we had all year. Goal of the game in my opinion,” Hilen said.

Thunderhawks led Big Blue 4-1 and then Andrew Macedo scored with 31 minutes left in regulation to close out the scoring.

“We didn’t get a goal in the second half. We knew what they were going to do overall,” Herrington said. “Tonight we just didn’t have the magic.

“Starting tomorrow, we are going to refocus,” Herrington added. “Honestly it starts tonight when the guys go home.”

The Thunderhawks moved to 2-4-2 as they finish a five-game road trip at Springboro on Saturday. Big Blue is 0-5-3 and will face Walnut Hills on the road Saturday.