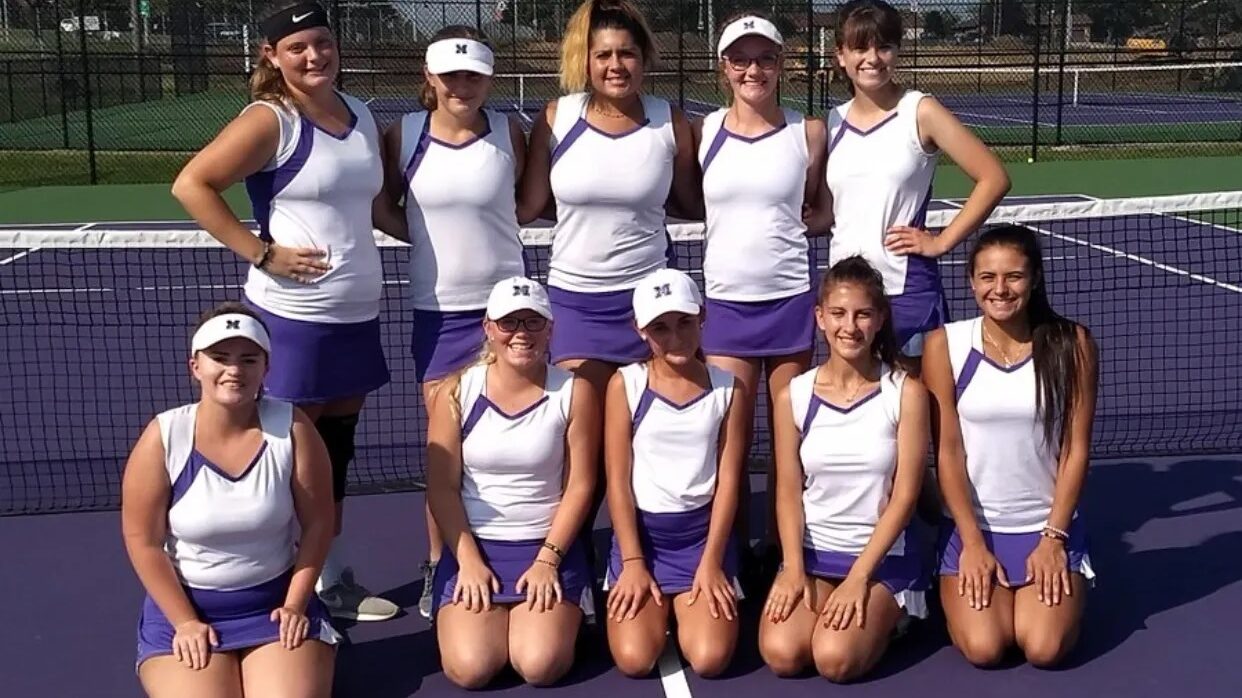 The Warriors forfeited three of the singles matches and lost two doubles matches on the road in Middletown.

Juniors Selin Misirioglu and Hannah Wilson beat the Warriors 6-2 in set 1 and 6-3 in set 2. Paige Patterson and Niomi Dorn never let up, not even giving a game as they shut out the Warriors 6-0 in the first and second set.

This was the first time Misirioglu and Wilson teamed in doubles. The same for Dorn and Paterson.

Both Dorn and Misirioglu notched their first wins in varsity tennis.

“I think my ground strokes were pretty good,” Misirioglu said. “I could have done a little better on my serves. That’s something I could work on.”

Middletown coach Kristi Henn was impressed with both doubles performances.

“I thought they did great. They worked really well as a team. They talked to each other.” Henn said.

Having fun, communicating and restraint with self-criticism is a balance that Henn teaches new players.

“Our biggest thing when it’s the first time out there, is to do your best and making a mistake is not a big deal,” said Henn.

This first win is fitting for Dorn considering her first introduction to tennis came inside a history class.

“I had coach Seth Fair as a teacher in eighth grade. He talked about it a lot and it seemed like a lot of fun,” Dorn said.

“I am looking forward to see how the girls compete with all the other teams in our flight,” Henn said. “It’s going to be exciting for them because we get to see a couple schools we haven’t played against yet.”

LAYNE TO COMPETE IN COACHES CLASSIC

Middies number one singles player Arianna Layne is competing in this weekend‘s Coaches Classic. She has a bye in the first round. Layne is 9-5 overall and 2-5 in GMC matches.

“I knew she was a good athlete. I knew she would fit in right away,” Fair said. “She ended up playing doubles her first year.”

After that, she gained momentum and took Oak Hills’ number one singles player, in three sets.

“I think I could of won that game,” Layne said. “The tiebreaker, I lost by three points, it was very upsetting.”

“That was the moment where she felt like she could compete with anyone in the GMC,” Fair said.

Whatever Layne’s opponent had in experience, Layne made up for it with poise, Fair said.

Even though Layne is a three-sport athlete, she has other priories.

“My first thing is academics,” Layne said. “I have to be perfect with my grades.”

Her favorite subject is science and she’s not shy about her passion for physiology. Academics, softball or tennis — Layne doesn’t believe in shortcuts just because she’s the jack of many athletic trades.

“The hardest thing about playing three sports is time management,” Layne said. “You have to be able to put the same amount of time in each sport to be the best of the best.”