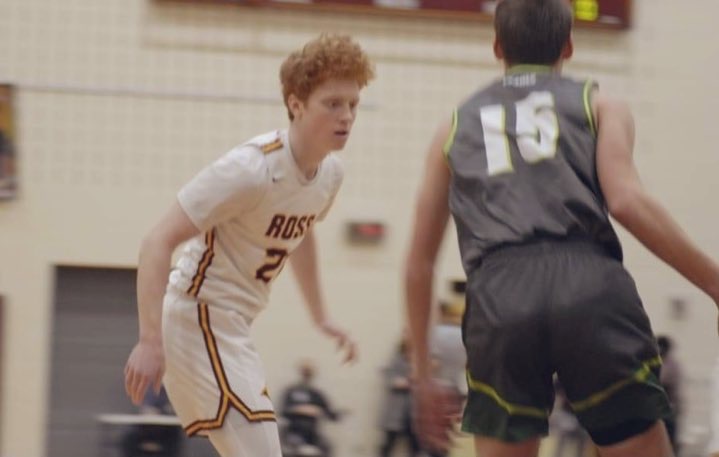 It was the third game in five nights for Ross and second in a row after beating Mount Healthy Friday.

During the first two minutes of Saturday’s bout, Ross went on a 5-0 run — poised to put some early pressure on Badin’s transition defense.

“When we tend to start off, play fast and push the ball in transition and get up and press, we seem like a more energized team,” Ross coach David Lane said. “We get more into the game.”

Badin senior guard Ryan Kirkendall hit a 3 from the corner, which cut into the Ross lead at 5-3. Then a couple possessions later, Ross senior forward Max Stepaniak hit a 3 of his own for an 8-5 lead.

Senior forward David Schweinefuss got Badin within one as he drove to the basket for the layup to cut it to an 8-7 deficit.

Lane kept preaching to his team to kick up the intensity on defense as Badin was inching closer to taking the lead. Lane’s Rams heard him loud and clear as they pressed Badin the last three minutes of the first quarter, forcing the Rams in green to turn the ball over. Ross ended the quarter on a 7-0 run for a 14-8 lead.

Forty seconds into the second quarter, Stepaniak hit the second of his five 3-pointers off the glass. Ross guards Tyler Hood and Jimmy Booker both hit treys as well, pushing their team to a 13-2 run. Badin ended Ross’ run by scoring five straight thanks to free throws by Ian Sabourin and a 3 by Andrew Larkin.

But Ross had the double-digit lead 27-15 going into the half.

Stepaniak began the third quarter with a 3, putting Ross up by 15. The possession before the 6-foot-8 forward stole the ball to set up his shot — which he was virtually automatic from all night.

Stepaniak was involved on both ends of the floor throughout the game with a couple of big blocks — one that caused some controversy amongst Badin’s fans and the coaching staff.

Ross was up 34-17 with 3:11 to go in the third, Stepaniak appeared to have interfered with Schweinefuss as he drove for a layup. The ball seemed to go into the basket the same time Stepaniak went for the block. But the referees called it a block. Badin’s fans booed and screamed at the referees as they were in disbelief. Badin coach Gerry Weisgerber didn’t agree either as he gave the officials a mouthful. Weisgerber was called for a technical foul as he continued making his case for the referees not calling goaltending.

That situation seemed to have taken the wind out of the Badin sails as it only managed five points the rest of the quarter. To add injury to insult, Ross senior guard Sam Nunn held the ball for the last shot with Kirkendall guarding him. Nunn dribbled down the clock and hit a mid-range shot at the buzzer, and Ross maintained a double-digit lead at 39-22.

The fourth quarter once again began with the ball in Stepaniak’s hands, but this time he threw down an emphatic dunk. Senior forward Joe Schottelkotte drove to the basket, dishing it to Stepaniak. The dunk brought the Ross home crowd to their feet, as the lead was extended to 41-22.

“It was just there tonight,” Stepaniak said. “I mean we have been practicing to shoot better all week. I just felt it was there tonight, so they keep letting me shoot and they kept going in.”

Ross’ defense limited Badin well below its season average of 45 points per game.

“We’ve just got to get our offense doing a lot better than what it’s been lately,” Weisgerber said. “We’re getting good looks out of the offensive run — we just got to get a little bit more of it.”

Both squads get back to action on Tuesday. Ross travels to Northwest, while Badin hosts Chaminade Julienne.