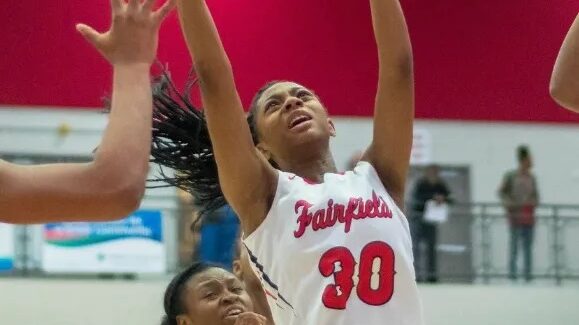 HAMILTON — Early 14-point deficits are hard to overcome, and even more difficult is relinquishing one.

The Fairfield High girls basketball team gave up an early 14-point lead to Greater Miami Conference rival Hamilton, but held on with a drama-inducing 3-point shot by Kayla Summerville with seven seconds remaining to send the game into overtime.

The Indians outscored the Big Blue in the extra stanza 9-5 to win 70-66 on Wednesday night at the Hamilton Athletic Center.

Falling behind early has become par for the course for Hamilton. So too have monumental comebacks.

Trimming the 14-point lead to 10 by the end of the first quarter and down to seven at halftime, the Big Blue showed some resolve in getting back into the game.

“It’s kinda been like that during the season. We have to dig ourselves out of the hole,” Hamilton coach Harry Phillips said. “I said it on the bench that digging ourselves out of a hole early expends a little more energy than we want to.”

Leading the way for the Indians was Kelis Jones with 17 points and four rebounds. Summerville added 13 points and five boards, and her big 3-pointer to send the game to overtime was preceded by a missed three pointer just moments before.

“It was large,” Loper said about Summerville’s trey. “We struggled a little bit shooting the ball in the second half, I don’t know if we got tired or what.”

For Hamilton, Cici Riggins led all scorers with 23 points and added eight rebounds. Playing Robin to her Batman was Anna Cardwell, who tallied 16 points and three assists.

“Anna was a sleeping giant that woke up tonight,” Phillips noted about Cardwell. “She took it upon herself to get into position to score. She put us on her back and she made shots where like goodness.”

To get themselves out of the early deficit, the Big Blue upped the defensive pressure in the second half forcing nine turnovers to the four they forced in the first half. Adding a combined 11 for 12 from the free throw line gave them points with the clock stopped.

“Defense. Defense got us back into the game midway through the second quarter,” Phillips said. “We got our guards going downhill. You get Leah Smith, Anna and Cici going downhill, we’re hard to contend with.”

“Hamilton is playing really well right now and I tell you they might surprise some people in the tournament,” Loper remarked about the Indians’ foe.

With 3:50 remaining in the game, Cardwell was fouled on a made layup and after sinking the free throw, it gave the Big Blue their first lead at 57-54.

The lead changed four times over the remaining 3-plus minutes, freezing the crowd as much as the negative degree temperatures did outside — until Summerville’s penultimate long range trey broke the ice.

Fairfield hit every free throw in the extra period proving to be the difference in the victory.

The Indians move to 13-5 overall and 8-4 in conference play and travels to Colerain on Saturday.

The Big Blue drop to 8-10 overall and 3-9 in conference. They play at home against Lakota East on Saturday.