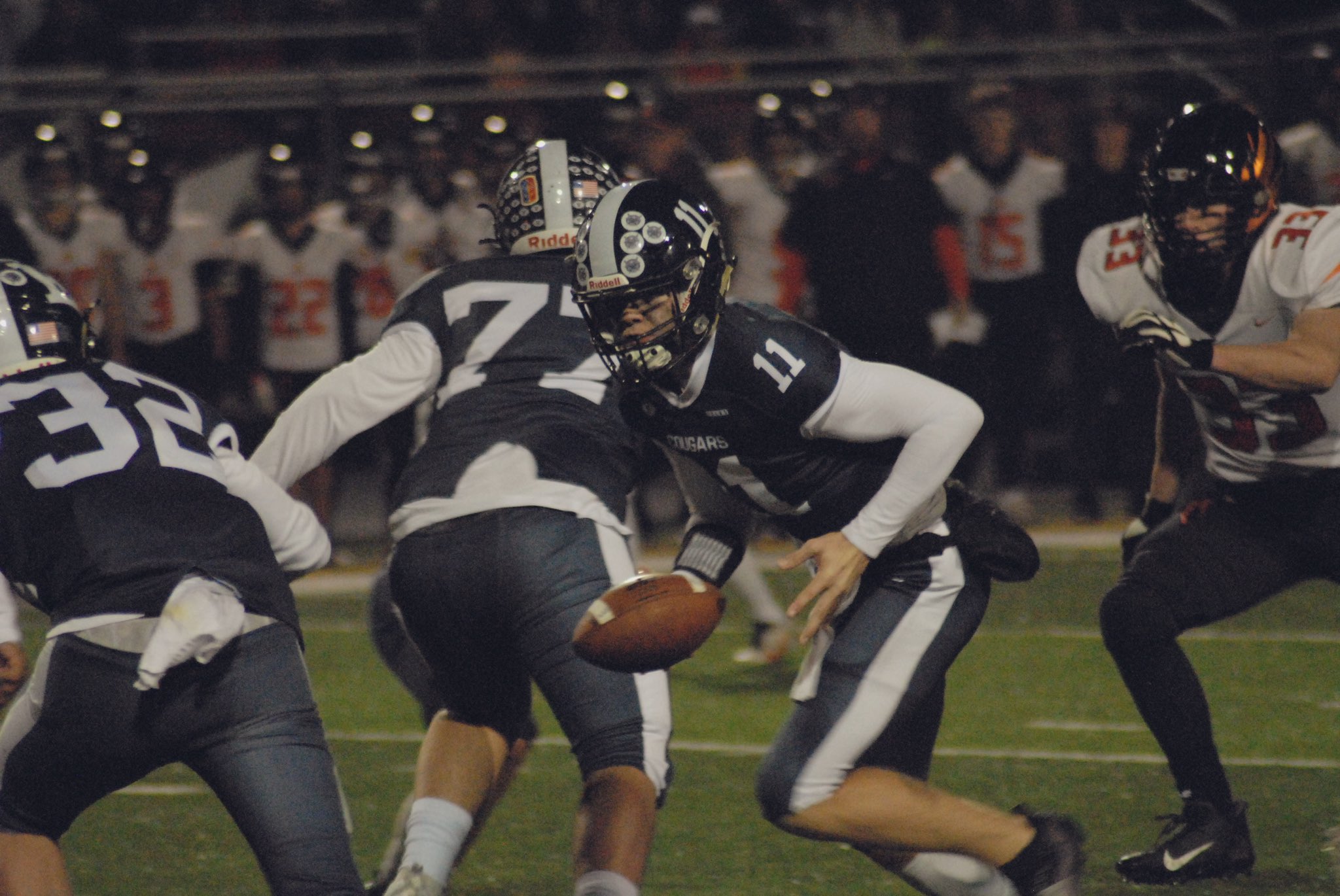 MORROW — The Edgewood Cougars had a hunch that their defense would be tested a little differently Friday night. Anderson’s offensive stat sheet was a tell-tale sign.

“We knew they were going to put us in a dilemma and put us in situations that we hadn’t seen,” Cougars coach Scott Clemmons said. “We just got down too much.”

The Raptors pinned the Cougars early with an explosive first half and ran away with a 55-35 victory in a Division II regional semifinal at Little Miami.

The Cougars, who finished the season at 11-2, had won 11 straight heading into Friday.

“They set a mark with this program,” said Clemmons, who noted that this year’s squad was the third team in school history to win 11 games in one season. “They made the community proud, which is what we always talk about. They made us coaches proud.”

Anderson quarterback Griffin Scalf, who led the Eastern Cincinnati Conference in passing, quickly shredded an Edgewood secondary that wasn’t used to the run-and-gun style of offense.

“To simulate different things between what we do and what they do, it’s hard to do,” Clemmons said of Anderson’s offense. “It was hard.”

Scalf connected with his main target, receiver Mike Smith, on a 46-yard touchdown strike to put the Raptors up 27-0 with under 9 minutes left in the first half.

A 44-yard pass from Riley Brown to Brick Barker set up the Cougars’ first score — a 3-yard plunge by Tavionne Crosby to cut the Anderson lead to 27-7 with 6:53 left in the first half.

“I can’t sit here and tell you how proud I am of those kids, of the fight,” Clemmons said. “We could have just given up and not finished it. They kept going and kept fighting, fighting, fighting. They gave it everything they had.

“Our seniors, wow. I’m just so proud of them,” Clemmons said. “We told them at halftime, ‘Who are you as people? Who are we as a program?’ They responded well.”

“We kept persevering and making adjustments,” Clemmons said. “But like I said, I’m proud of my seniors, and I’m proud of this football program. These guys give 100 percent. They didn’t give up at any time during this game.”

Crosby ran in another score from 15 yards out to bring the Edgewood deficit to 41-21 with 6:39 remaining on the third quarter clock, but the Raptors answered right back with a quick score to make it 48-21 with under four minutes left in the third.

Scalf found Brodey Berg on a 10-yard touchdown connection for Anderson, and then Edgewood’s Braden Sullivan scored on a 13-yard touchdown. The Raptors took a 55-28 lead into the final frame before the Cougars tacked on one more score.

Scalf threw for 388 yards and five touchdowns for Anderson, which moved to 8-5. The Raptors play Kings next Friday. The Knights knocked off Winton Woods 23-16.

Crosby carried the ball 18 times for 174 yards and three touchdowns for Edgewood, which saw its final season in the Southwest Ohio Conference come to an end. The Cougars will head to the Southwestern Buckeye League next year, along with Ross.

“We’re going to be going to the next stage,” Clemmons said. “We will take a couple of weeks off here and kick ourselves in the rear ends for a little bit. Then we get to reset and reevaluate for another season.”