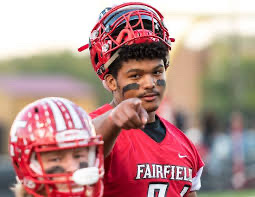 A Fairfield graduate, a national champion, and a blind-side protector at Clemson for the No. 1 overall pick in the 2021 NFL draft, Jackson Carman could do nothing but smile when talking about the call he got from a 513 area code last Friday night.

“As soon as I saw the 513 pop up on my phone, instantly everything just hit me at once,” Carman said on day two of the draft. “It was an amazing feeling knowing I was going to be able to be home. It was just indescribable.”

Selected 46th overall in the second round by the Cincinnati Bengals, Carman was celebrating at Fairfield head football coach Jason Krause’s home with some former high school teammates. And the thought of being able to come home and feel the love from the community and then have the opportunity to return that love on the field brought joy to his face.

“To be in this position to be at home and be with my family and support back into the community is just awesome,” Carman stated with a beaming smile.

Being home also means Carman gets to live close to his favorite football player.

“I never had a favorite team growing up. I had favorite players, but my favorite player of all time has always been Anthony Munoz,” Carman said. “Knowing that I’m going to be able to be a part of an organization that breeds the pedigree of offensive lineman and also being close to guys like Willie Anderson and Andrew Whitworth, just knowing everything — the history the Bengals have to offer. It’s just amazing.”

Carman is listed as a guard on the Bengals’ website and is expected to come in and compete immediately alongside newly acquired Reily Reiff. Carman is doing so having only taken practice snaps at guard, playing tackle his entire career at Clemson, but he is confident he can put his hand on the turf and provide the protection the Bengals are seeking on the inside.

“I’m definitely the type of player that whatever the team needs me to do to help us win I’m going to do it,” Carman said. “And if that means for me to play guard, I’m going to do it at the highest levels. I’m excited for the opportunity wherever it’s going to be.”

Carman knows that there is a certain attitude that comes with being from Southwest Ohio — a bring your lunch pail, bring your hard hat, and a work-hard mentality that embodies the region. A particular toughness that is required to swap facemask paint that kids from this area can only understand.

“Southwest Ohio football is tough and it’s definitely extremely physical,” Carman said. “And for me going into college, I just had to put my head down and go to work. In Southwest Ohio football, we’ve got cold games, we’ve got intense student sections. I’m really grateful to be able to play at Fairfield and to go against the competition I went against.”

Carman will wear the No. 79 jersey he wore at Clemson on his first snap as a Bengal, and he said he will try to take the happiest moments of being drafted by his hometown team and winning a national championship and meld them into a competitive contributor.

“It’s one of the best moments of my life — surreal, just amazing,” Carman said. “Those moments are really just indescribable. It’s just really great to be in the moment and experience it.”