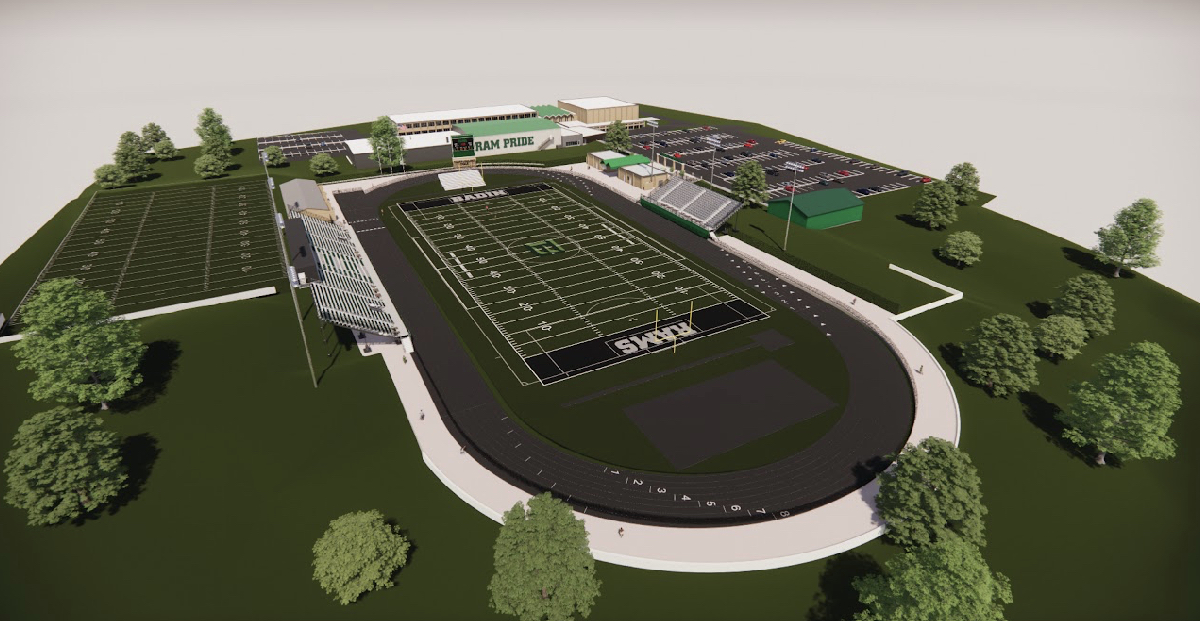 He was getting ready to set the stage for exciting times on New London Road.

“Every day is a great day to be a Ram,” Badin’s president said. “But that’s especially true now.”

Pendergest addressed a group of about 30 who were intently listening to the plans for Badin’s long-awaited stadium project.

“As far back as I can remember, people have been talking about when Badin will have their own stadium,” he said. “The time I’ve been working here, I hear people say, ‘If I won the lottery, Badin would have a stadium.’

“And finally, we’re very excited to say that time is now.”

During a Building a Brighter Badin initiative meeting for attendees, Pendergest presented a conceptual video rendering of what the proposed athletic facility could look like and the features it could provide.

The multi-sport facility will be called the Matandy SportsPlex and house Terry Malone Field, inside the Lanni Family Stadium. It will also include an 8-lane track and a nearby fully synthetic practice field.

“The opportunities that the Matandy SportsPlex will provide for our alumni and friends will be tremendous,” Pendergest said. “But the students are the ones who will truly benefit the most.”

The project is estimated to cost roughly $8 million, according to Pendergest. But with rising costs and labor factors, and the economic effects during Covid the last two years, he expects that number to rise. Pendergest hopes $11 million can be raised.

“Due to the overwhelming support of those we have already met with and those who have already committed to this project — which is a little over 100 people — we’re very excited to announce that we’re $8.2 million already pledged to this project,” Pendergest said. “That doesn’t count gifts in kind on top of that.”

The Building a Brighter Badin gift initiative, Pendergest said, will enhance and change the Pride, Tradition, Unity and Spirit and youth experience within the Badin community.

“Thanks to the investment donors Frank and Joanne Pfirman made, this dream is starting to become a reality. Their lead gift got the ball rolling for the Matandy SportsPlex.”

The Pfirman family also donated and had built Badin’s activity center that sits behind the school.

“We want the Matandy SportsPlex to be the premier sporting facility in southwest Ohio,” Pendergest continued.

Frank Pfirman, of Matandy Steel, expressed multiple concerns to Pendergest in terms of safety and playing conditions for Badin’s student-athletes last year when the two had a meeting. Practice and game scheduling also was at the forefront of the conversation.

“We talked about how hard it is to schedule soccer and football games, and our track teams struggle to find a place to practice,” Pendergest said. “Off-campus facilities for most of Badin’s outdoor practices has to come to an end.”

Badin has scheduled its home football games at other Butler County area schools in recent seasons, including Edgewood, Monroe, Fairfield and Hamilton.

Badin principal Patrick Keating said the positive effects the sportsplex will have on the Badin community in other ways than sports is insurmountable.

“This project reaches far beyond athletics,” Keating said. “I really look forward to the times where we can have school events in this athletic complex and more community events like Relay for Life and spirit Olympics.”

Keating also noted that the Catholic Youth Organizations associated with Badin can also enjoy the benefits.

But Pendergest said the first thing that has to happen is parking. Work along New London Road in plots next to the school have already been started.

“We need additional parking regardless, because if you come to any of our events or games here now, we don’t have enough spaces to begin with,” Pendergest said. “That’s going to be a great addition. We hope to get that going in the spring or early summer.”

Pendergest said there are three factors that will go into making sure the project can start. The biggest thing is the total number of pledges financially.

“We have to get to the point where we know we can pay for it,” he said. “And two, we have to track when those pledges are coming in. Because once we start construction, we have to start paying bills. The third is the permit process with the city.

“We have a great relationship with the city, and once we can get all those three factors going, we’ll be excited to get the ball rolling.”

What to know about Badin’s multi-sport complex: