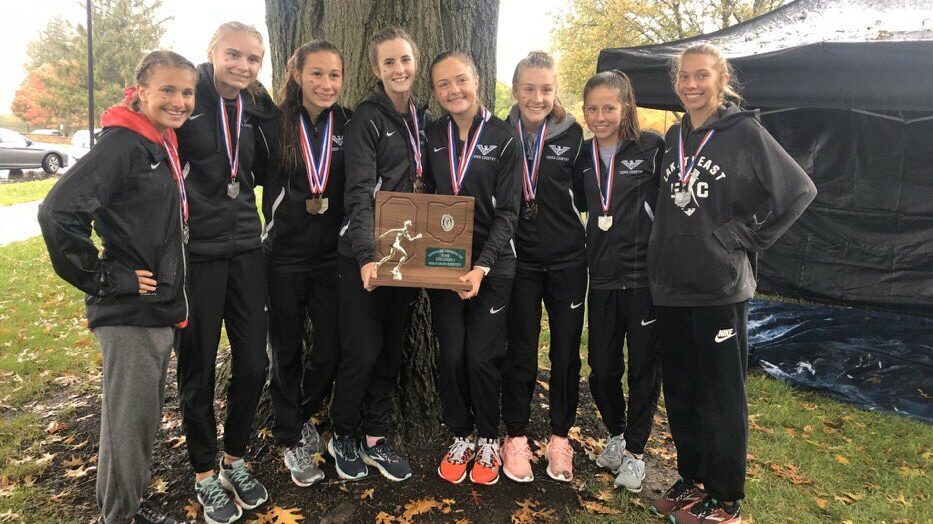 It’s the most coveted of all hardware — a high school state championship.

The final 3.1 miles of the cross country season is being held at National Trail Raceway in Hebron, and 11 area runners will compete in the state cross country meet on Saturday, Nov. 2.

Seven of those 11 runners will compete as a team, as the Lakota East girls cross country squad will participate in the Division I state meet for the third year in a row. The Thunderhawks are the only area team to be compete as a squad.

Fresh off a second-place finish at the regional meet, Lakota East fell to Beavercreek — which had four of the five fastest times.

“At the very least, they want a podium spot which goes to the top 2 teams at the state meet,” Lakota East coach Adam Thomas said. “To have a shot at winning, our girls know that all seven will have to run the best race of their lives on Saturday.  We are sharpening them up in their training this week to hopefully make that a reality.”

Badin is sending two runners to the Division II state meets, respectively. The brother-sister tandem of Owen and Maura Mathews

Running is something of a family heirloom for the Mathews family, and all Owen and Maura have to do is look at the school record book to see a familiar name. Jeff Mathews. Their father.

Jeff holds the second-fastest time in school history with a 16:20 — which is 11 seconds faster than his son. It’s a time Owen is eyeing at the state meet, not just to get into the school record books, but for household bragging rights.

“Owen will take aim at that this weekend,” Badin coach Ann Gruenbacher said. “Both Maura and Owen are strong, healthy and at the peak of their training. We look forward to them both running excellent races to finish their season and hopefully set new personal records at the state meet.

“The team is very excited to travel to Hebron to cheer on their teammates,” Gruenbacher added. “And we all look forward to what the future holds for our entire team.”

Lakota West junior Zach Beneteau placed 12th at the Division I regional meet with a time of 16:38 and holds a personal best of 15:46. That earned him a spot at the state meet.

His finish at regionals showed the hard work he has put in the past two years. Beneteau has lowered his time by about a minute and 30 seconds over the course of two years, according to Firebirds coach Sean Hart.

“Zach has worked hard for the past few seasons to get where he is at,” Hart said. “He has done everything asked of him and more.  His work ethic and dedication are a big part of his success.”

“Saturday when he qualified, it was a bittersweet moment, as Zach was disappointed that his team missed qualifying and this says a lot about his character and personality,” Hart added.

Talawanda sophomore Kiefer Bell is making his first trip to the state meet and the first trip for a Brave boys cross country runner since 2000. Doing so as a sophomore, in Division I against the best the state has to offer, is an accomplishment on its own.

“Kiefer is very good at knowing his competition and coming up with a game plan based on who he is running against,” Talawanda coach Paul Stiver said. “We look forward to running the race on Saturday and seeing how he matches up against runners from across the state.

“Kiefer ran about as perfect a race as he could run at regionals,” Stiver added. “He started out a little faster than normal and was in the top 20 right away. At the 3/4-mile mark, the top 20 had already started to pull away from the field. He slowly moved up from there.”

Bell has run a personal best of 16:08 and ran a 16:33 at the regional tournament to advance to state.

The state meet begins at 11 a.m. and is scheduled to conclude at 5 p.m.