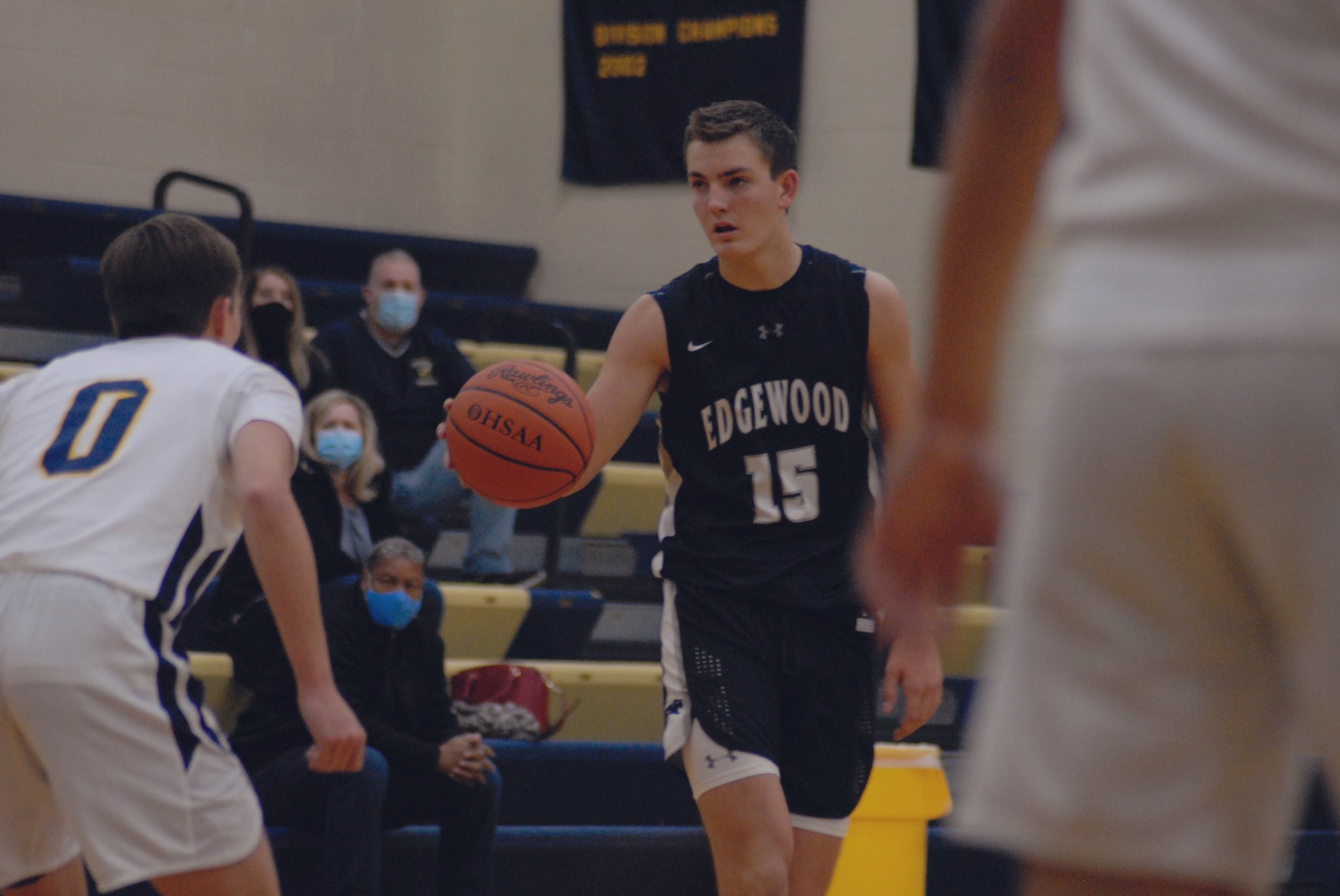 MONROE — Edgewood’s Caleb Allen walked out of the locker room Tuesday night holding the game ball. And he had every right to.

The junior guard stole the show by shredding a single-game school record 47 points, and the Cougars knocked off Butler County foe Monroe 77-72 in double overtime to open up the season.

“I really don’t know what to say,” Allen said. “It sure didn’t feel like I scored that much. But it was a pretty exciting game. This feels pretty great.”

The previous Edgewood record for most points in a game was 41, held by 2004 graduate Brian Hangbers during his senior season.

“The first half I was not feeling it,” said Allen, who had just four points heading into the halftime break. “I had a decent second half. But honestly, it was a team effort tonight, and I couldn’t have done it without them. We played good defense.”

Edgewood, on the back of senior Aaron Frazier, marched out to a 14-8 lead after the first quarter before Monroe clawed its way back. The Hornets stiffened things up on defense and were able to take a 23-18 advantage into the locker room.

“That’s a good team,” Edgewood coach John Thomas said of Monroe. “They play hard. They play real hard. I can’t lie, I said in the third quarter, ‘What are we going to do?’ We tried about 19 different defenses — couldn’t figure out how to keep them off the board, and defensively we were struggling.”

Monroe maintained a double-digit lead, 11 points being the largest margin, for most of the third quarter. But the tide slowly shifted Edgewood’s way as Allen began to take over.

“When they have a player that can play, they do a good job of making sure that it’s in his hands,” Monroe coach Aaron Horne said of Allen. “The players on their team know their roles. He’s a special talent. When he gets downhill, he’s hard to stop. We knew that. I don’t think we saw a player of that caliber in the preseason. We put some different guys on him. We tried to deny him at times and tried to not let him get touches.”

The Cougars fed him the touches. Allen did most of his work inside the paint, creating opportunities at the line. He went 11 for 13 from the line in the third and fourth quarters. Allen scored 43 of his points in the second half.

The Cougars outscored the Hornets 20-11 in the fourth quarter to send things to two overtime frames. Edgewood closed it out with some stellar shooting from the line, going 14 of 16 in the extra periods.

Frazier finished 18 points for the Cougars.

The Hornets had four players score in double digits. Jack Taylor led the way with 17 points, while Marty Zumbiel had 16, Collin Deaton had 14 and Adam Ploeger had 10.

“I gave our guys credit in the locker room,” Horne said. “It’s never been about our guys not playing hard or giving effort. Obviously, we’re disappointed. But I’m not mad about the outcome. They play hard. They always do. We just weren’t able to get the outcome that we felt like we deserved based on our effort.”

Both programs get back to work on Friday with Edgewood (1-0) hosting CHCA and Monroe (0-1) hosting Bellbrook.