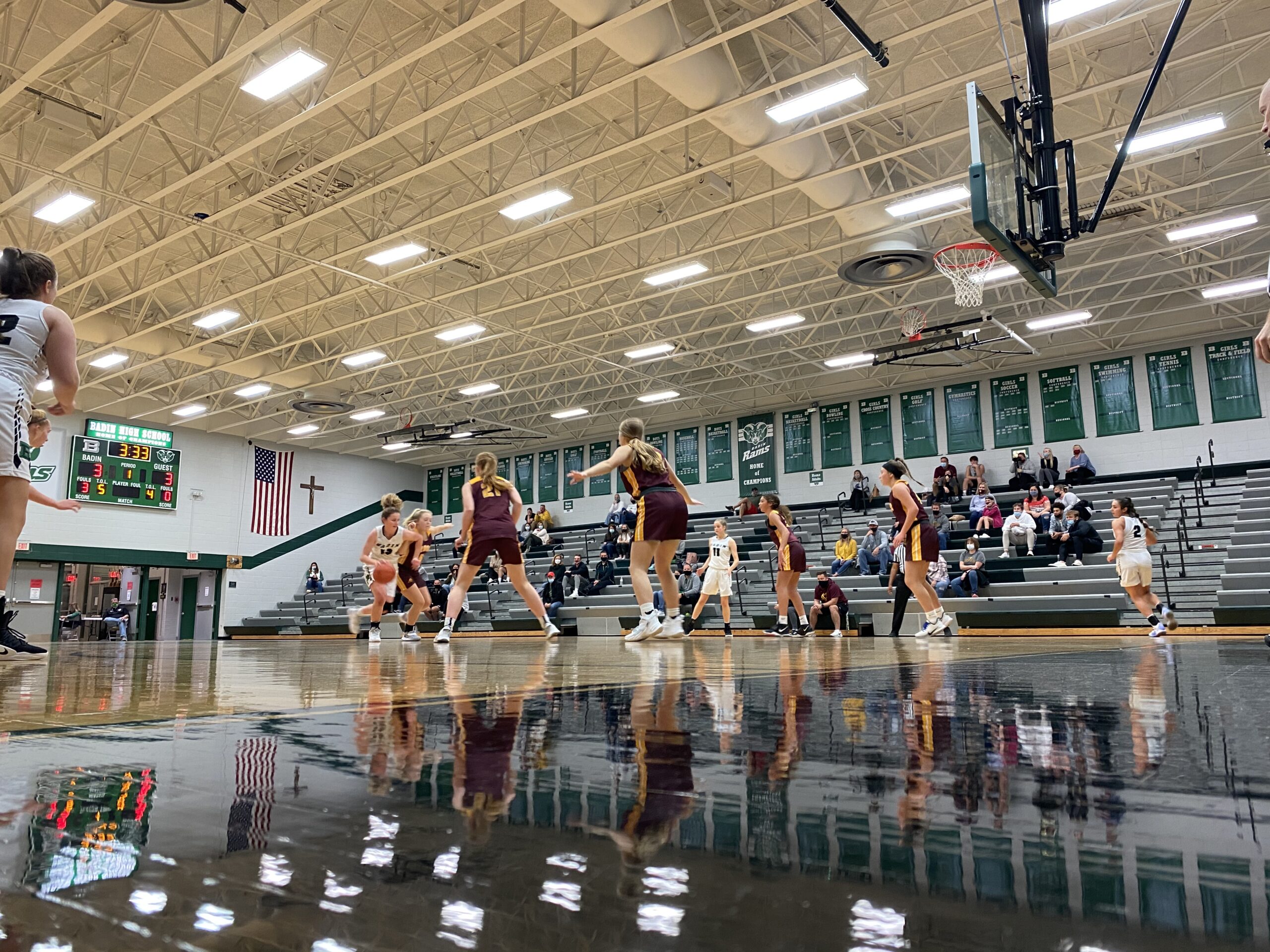 HAMILTON — Badin High girls basketball coach Tom Sunderman said it was OK for his Rams to be forgetful Tuesday night.

“It’s like a relief pitcher — you have to have a short memory sometimes,” Sunderman said. “If you miss two or three shots in a row, you’ve got to make the fourth. Once you get going, it becomes contagious.”

Badin forgot about a sluggish first quarter, and a slew of juniors put up some big numbers in the scoring column as the host Rams ran away with a 58-17 win over Butler County rival Ross.

Both programs went into Mulcahey Gym short-handed due to a mixture of key injuries and quarantines, but it was Badin (2-0) that moved out to a 7-5 advantage after the first quarter.

And that’s when the Rams in green kicked it in gear.

“It was kind of a rough start,” said Badin junior Mahya Lindesmith, who notched at game-high 16 points. “We knew it was going to be a little harder with some of our players gone. We came out a little iffy, but in the second and third quarters, we did what we needed to do to get back up.”

Badin outscored Ross, which caught the turnover bug, in the second quarter 15-0 to close out the first half and build a 22-7 cushion.

“We knew that wasn’t how we wanted the game to go,” said Lindesmith, who knocked down three behind the arc to start the second half and keep the Badin momentum rolling. “We stepped it up and showed what we will have to offer for the rest of the season.

“We basically did whatever would work,” Lindesmith added.

“We worked hard,” chipped in Badin junior Morgan Dixon. “We passed the ball and kept working on what we had to work on. We got our shots in and kept hitting them.”

Dixon, who scored a career-best 14 points, tallied 11 of them in the second half.

“We worked on driving and kicking it out wide,” Dixon said. “We hit our shots. At halftime, we talked about how we need to make those shots out wide, and that’s what we did.”

Badin, which has won the last four meetings against Ross dating back to Jan. 24, 2018, was also led by junior Jada Pohlen’s 11 points.

“We talked about injuries being an excuse,” Sunderman said “Between injuries and quarantines, everyone is in the same boat — even playing field. So this year, it’s going to be extremely important that your bench players understand their role. The jayvee knows that it could be the next man up and everybody has to answer the bell.

“We were getting good shots, but they weren’t going in. That’s going to be our style this year,” Sunderman added. “We’ve got to stick to the style that will put us in the best spot.

“The thing that has been the most surprising out of our first two games is our defense — we were concerned about whether we were going to be a man team this year. Actually, it’s turned out to be the best defense for us.”

“We’ve got practice in the morning,” Ross coach Ben Buehner said. “The only way to get better is to go back in there and put it in the past and get back to work.”

Ross travels to Franklin on Monday, while Badin hosts Talawanda.