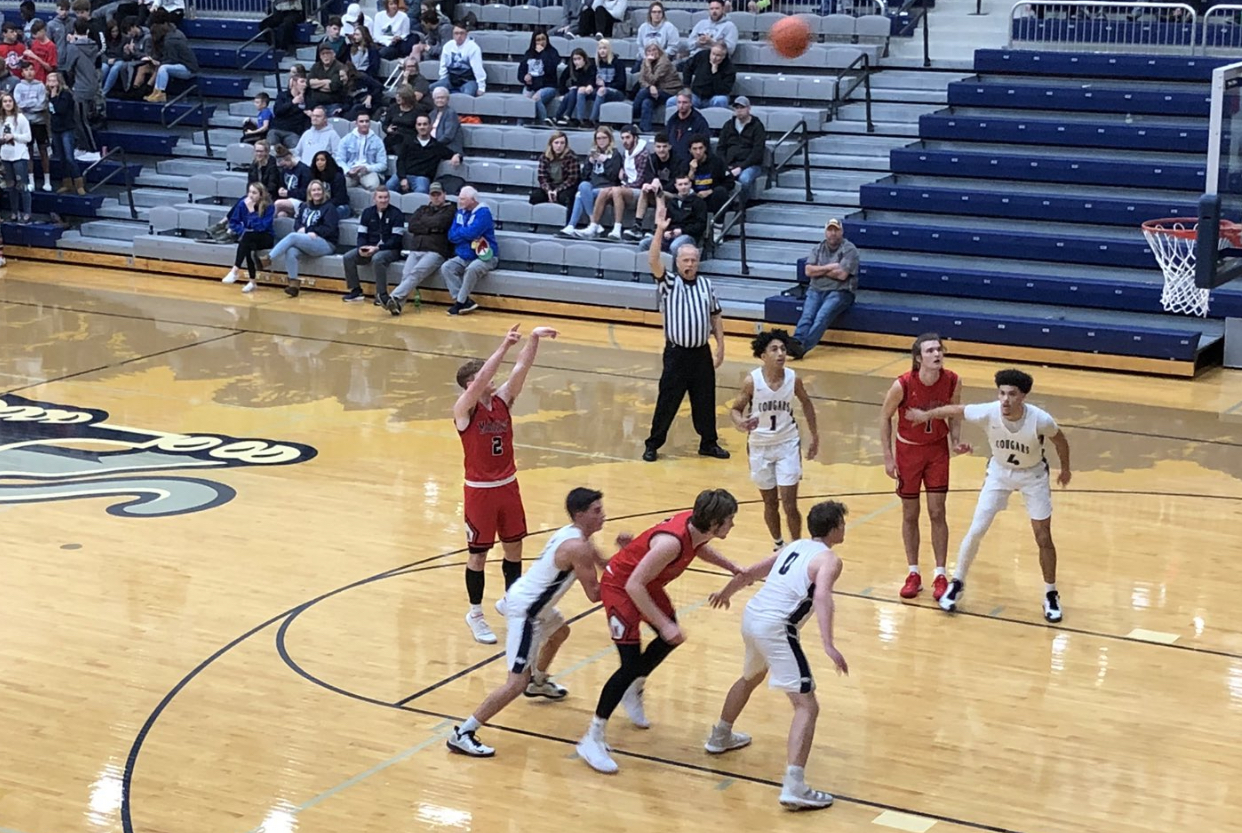 The Mohawks move to 6-1 on the season, while the Cougars dropped to 4-2.

Whisman’s teammates found him early, but neither team could score much as the first quarter ended at 6-all.

Edgewood briefly grabbed the lead 11-9 with 4:28 to go in the first. The Mohawks then went on a run with back-to-back 3-pointers from Tristian Sipple to push the lead to 18-12 with 2:02 left in the second quarter.

Whisman hit a 3 of his own to make it 21-12 with a little over a minute left, going on an 8-1 run. Judging by the way the Mohawks were playing it looked as if they would have a huge lead at the end of the first half.

Edgewood clawed back with on a 10-0 run to end the second. The run had a little controversy on Aaron Frazer’s stolen ball and score. Whisman was trailing Frazier on his way to the basket, there was slight contact as the referee called Whisman for a clear path foul. The call gave Frazier the basket, three foul shots and possession for Edgewood. The visiting Mohawk crowd appeared to be livid as they did not agree with the call. Frazier made each attempt trailing 21-17 with 50 seconds left.

Anthony Scott scored on a layup after the inbound to cut the Cougars’ deficit to 21-19. Edgewood capped off its big run with a Caleb Allen 3 as he was falling backward draped by a defender for a 22-21 lead. Allen led Edgewood with 15 points.

In the third quarter the two teams kept it interesting as they traded baskets and Whisman being heavily involved in the offense with 22 points of his up to that point. The Mohawks took a 39-35 lead into the fourth.

“I credit my teammates as well as help from my point guard (Sipple) to distribute the ball,” Whisman said.

In the fourth quarter Madison put its foot on gas pedal with contributions from Jake Edwards, Sipple and Jake Munafo to pace the Mohawks to a comfortable lead — 51-41 with 3:43 left.

Madison was able to bleed the clock a little before Edgewood went on a brief run thanks to some defensive traps. But it was too little too late for the Cougars.

Whisman was huge on both ends but noticeable star that was mentioned is Edgewood’s John Shepherd. Shepherd, a senior guard, was held to a season-low 2 points and fouled out late in the fourth. Shepherd on the season is averaging 17 points per game. Shepherd was guarded by Munafo most of the night, frustrating the star guard.

“Jake Manafo was our MVP for tonight because he took Shepherd out of the game,” Madison coach Jeff Smith said.

“This was a good bounce-back win for us tonight,” Smith said.

Sipple finished with 14 points for Madison, which gets back to action at home against Miami Valley on Friday, Dec. 27.

Eric Brooks had 14 points for Edgewood, which hosts Carroll on Monday, Dec. 30.