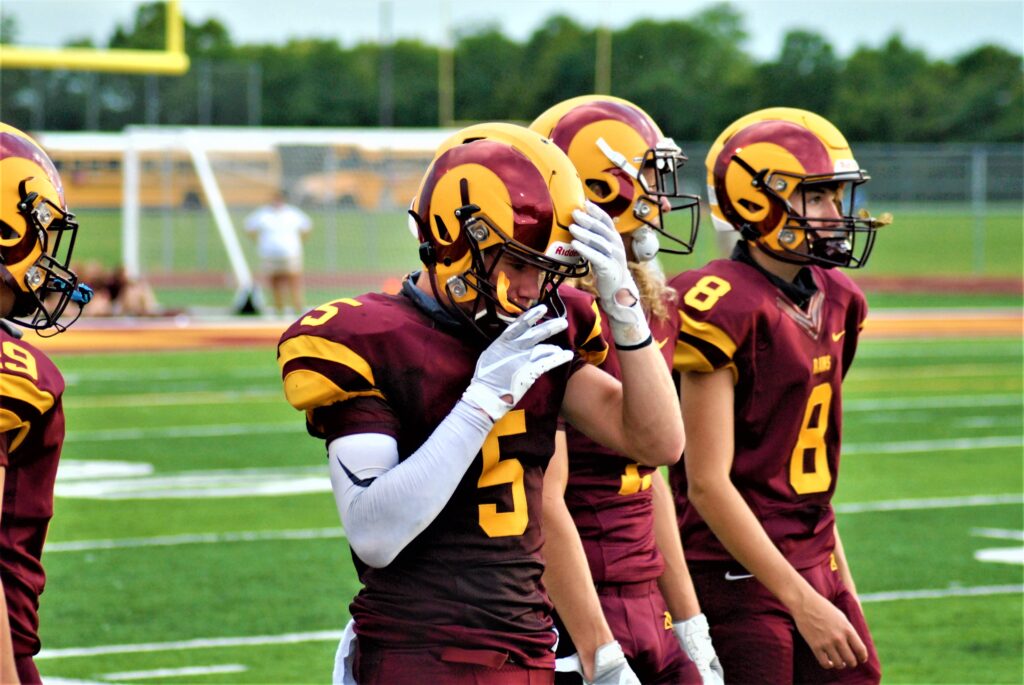 OXFORD — With their backs on their own goal line and needing a stop on fourth and 1 from the 7-yard line, the Ross Rams halted the Southwest Ohio Conference rival Talawanda Brave on the first drive of the game.

The Rams took over and marched 93 yards on a nine-play drive and stole the early momentum with a 31-yard touchdown run from junior Brayden Fraasman en route to a 35-0 victory.

“It’s such a momentum game anyways, and that’s huge for us. Defense and special teams, man,” Ross coach Kenyon Commins said. “Defense, which if you guys have watched us the first two weeks, we’ve kind of been trying to put the pieces together.

“Coach Meyers and his staff, I say it all the time, are just phenomenal,” Commins added. “But those guys just kept working, working and working — and it paid off. I don’t know what we held (Talawanda running back) Revelee to but it’s a goose-egg on the board, and for us that’s huge.”

The Rams held Talawanda to a punt and another turnover on downs in the first half, staking a 21 -0 halftime lead and the ball to start the second half.

“You look at it, the fourth down call that set the tone of the game right there on the first drive,” Talawanda coach Larry Cox said. “We were moving the ball, and you know, I should not have made that sneak call. That was on me, and I’ll take the responsibility for that.

“But, then what did we do?” Cox added. “We fumbled when we got down there again. Then we were driving and we get the 15-yard unsportsmanlike penalty. There were opportunities in there where we were doing some things, but we seemed to be our own worst enemy tonight.”

Fraasman led the Rams, and all rushers, with 146 yards and the two touchdowns on five carries.

“We felt offensively it was almost like Jackson and CJ had been forgotten about and not many people had heard about Fraasman,” Commins said. “I mean, he’s leading the SWOC in average yards per carry.”

The Ram defense continued to stop the Brave even after a second half opening 2-play 60-yard drive resulting in a Jaye Warren 26-yard touchdown run. The Rams defense never let up. Forcing the Brave into numerous 3rd and long situations.

Jackson Gifford added 93 yards and two touchdowns for the Rams and quarterback CJ Boze chipped in 88 yards — and as Commins loves a good plan coming together, zero passes.

“They just played their hearts out and even down there at the end they could have given up that touchdown and they force a turnover on that to keep the goose-egg up,” Commins said. “That was huge they played great.”