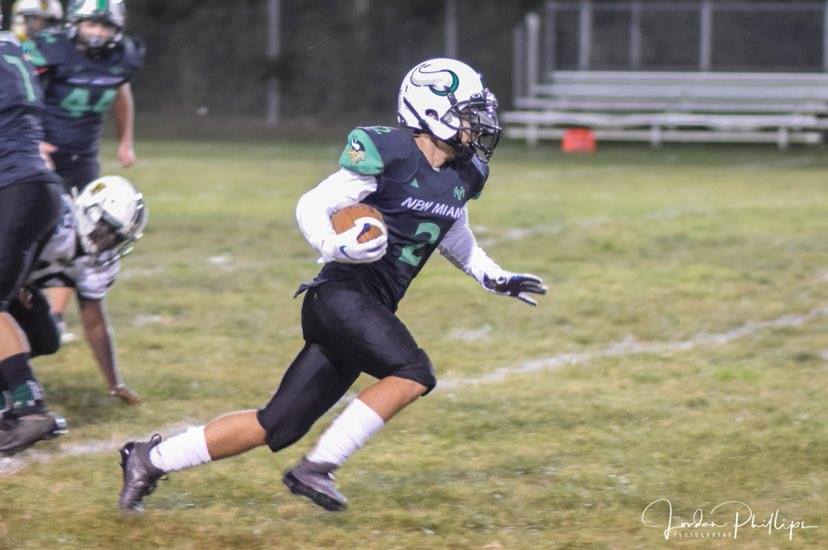 THE VILLAGE OF NEW MIAMI — New Miami High football coach Andy Stuckert knew it was going to be a battle last Friday night.

But the first-year mentor and his Vikings accepted the “punch in the mouth early” from St. Bernard, and they learned from it in a grind-it-out 14-8 victory.

“Last week was important for our program,” Stuckert said. “St. Bernard was really good, and we knew that coming in. I think we responded well. We found a way to win a close game, which is extremely difficult, and I was very proud of our players and staff.”

Stuckert said there are a couple of things he’s still unsure about regarding his program, despite the Vikings taking a 2-0 record into Friday night’s contest at 1-3 Cincinnati Country Day.

“After four weeks and playing just two games, we still have a lot of unknowns,” Stuckert said. “Consistency is tough to carry over week to week when you don’t have a game, but we won’t make excuses. We are focused on beating CCD.

“I don’t know how good we truly are, but it’s evident how good we really can be,” Stuckert added. “I’m looking forward to the game. If we put it all together and play solid in all three phases, we will be dangerous.”

Vikings quarterback Trey Robinette showed his leadership and a poised side last Friday, Stuckert said. The senior rushed for a score and also tossed a touchdown pass to his brother Jordan Robinette.

“Trey is a leader by example and one of the best competitors I’ve been around,” Stuckert said. “He really kept our players calm and focused with his play. But we have a bunch of players that can flat out play.”

Stuckert noted that senior Blake Hart’s presence on the line is starting to become visible.

“It’s getting harder and harder to hide the fact that Blake Hart is one of the best offensive linemen and defensive linemen in the state of Ohio,” the coach said. “I expect more colleges to start sniffing around Blake in the weeks to come.”

“CCD doesn’t have a lot of players, however, the players on the field are pretty good,” Stuckert said. “They are efficient and well-coached and have hung with every team on their schedule so far. With that being said, we need to play sound, responsibility football against an offense we are familiar with but haven’t seen yet this year.”

New Miami is looking to win its 18th-straight regular season contest dating back to the 2018 season.

“Talented and competitive,” CCD coach Dennis Coyle said of New Miami. “In my first year at CCDS I was impressed with how hard the players at New Miami compete on a weekly basis.”

Kickoff is slated for 7 p.m. at CCD. The Report plans on live streaming the game. WATCH LIVE HERE.