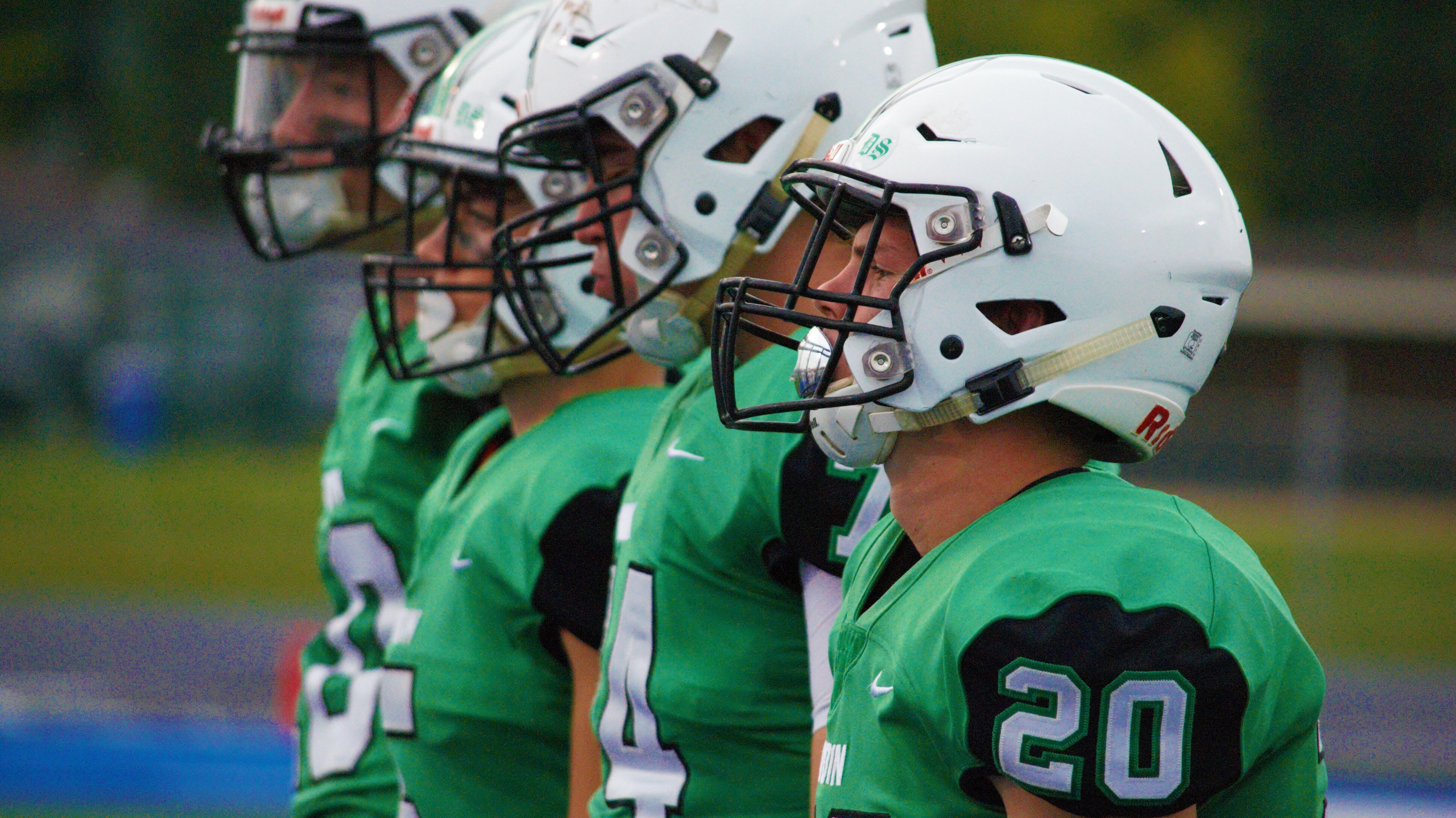 HAMILTON — It was Homecoming Night at Virgil Schwarm Stadium, and the 1-2 Badin Rams welcomed in a familiar foe, though it seemed very strange to call this a non-conference game.

The Roger Bacon Spartans and stud running back Corey Kiner entered The Schwarm, and rudely greeted they were.

Badin showed dominance on this Friday evening with a 31-7 victory.

Kiner will have no shortage of offers, as Jim Harbaugh’s son was scouting him for Michigan last weekend, but this night would be dominated by the Badin defense.

They knew they had to keep Kiner bottled up, and they were immensely successful for the vast majority of the contest. Badin’s Evan Schlensker came up with a sack on Roger Bacon’s first third-down of the game, and the Spartans were forced to punt early.

Then Badin’s offense threw Roger Bacon a curveball.  If the Spartans watched film and expected the Wing-T, they were sorely surprised to see the Rams come out in multiple 4-WR and 5-WR sets.

The Rams (2-2) relied on the arm of quarterback Zach Switzer, mixing it up with a sprinkling of Alex DeLong runs, jet sweeps, and shovel passes to slowly work their way down the field.

DeLong broke off a 14-yard touchdown run, and after “DeLongest Yard,” it was Badin 6-0, after the Rams missed the extra point.

Roger Bacon got the ball back and promptly went 3-and-out again, as Hunter Harrison stuffed Corey Kiner on third and 2. Jack Walsh was able to tackle the punter after a bad snap, the ball fumbled, a pile dove on it, and it didn’t matter who came up with it — it was Rams’ ball at the Spartan 35.

And it took one play.

Zach Switzer lofted a 35-yard pass to Josh Hegemann in man coverage, coming back and adjusting to the ever-dangerous underthrown-deep-ball, and winning the battle with his defender at the goal line. DeLong punched in the 2-pt conversion, and the Rams were up 14-0.

We know Corey Kiner is a stud, and while Badin’s defense was remarkable against him nearly all night long, on a third-and-1, with the safeties and linebackers trying for the stop behind the line of scrimmage, Kiner broke loose for a 36-yard TD run. The touchdown was 36 yards, and Kiner ended up with a total of 34 yards for the first half.

Badin’s defense held him to minus-2 yards rushing in the first half outside of that one touchdown run. Kiner would end up with 16 carries for 44 yards for the game.

DeLong punched in a 2-yard touchdown on Badin’s next drive, as the Rams refused to let Roger Bacon grab any momentum or a foothold in this game.

Roger Bacon then made a surprising offensive adjustment that both helped and hurt them. Realizing that they weren’t popping Kiner loose on any big runs in the spread formations, Roger Bacon went to a double-tight-end Maryland-I, which was far more successful for them. The only problem was that it took large amounts of time of the clock, when they were already down by multiple scores. The Spartans methodically moved the ball down the field, only to fumble on a quarterback-center exchange.

Taking full advantage of the turnover, Badin ran a fake jet-sweep and sent Hegemann on a fly route. Switzer slightly overthrew it, but Hegemann caught up to it, made a great one-handed catch in stride, and kept his balance, taking it 65 yards to the house. That set Badin up with a 28-7 halftime lead.

Hegemann would finish the game with 5 catches for 153 yards, 2 touchdowns, and a very nice crown, fitting of a Homecoming King. (Sunny Kim was named the Homecoming Queen at halftime as well.)

The score remained 28-7 throughout nearly the entire second half, as Roger Bacon moved the ball, albeit very methodically, and Badin worked on the clock as well. With under a minute left to play, Badin’s Kelly Havens hit a 27-yard field goal to wrap up the scoring at 31-7.

The female soccer player becomes what is thought to be the first Lady Ram to ever score a point for the Badin football team, according to Dirk Allen.

Roger Bacon falls to 3-1 on the season and will return home to Bron Bachvich Memorial Stadium next week to take on a much-improved McNicholas Rockets squad, which is also 3-1.