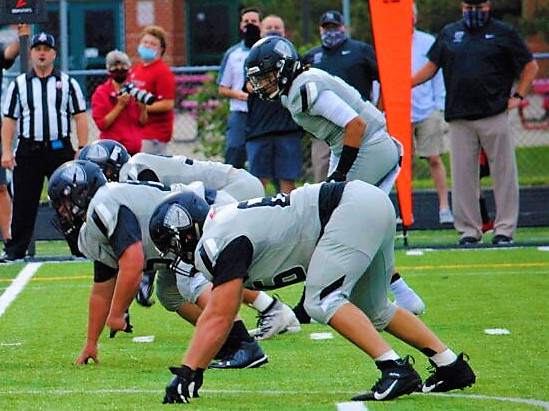 LAKOTA EAST 28, PRINCETON 19: The Thunderhawks picked up their first win of the season in impressive fashion on Friday night. Lakota East churned up 363 total yards of offense while holding possession of the ball for a whole quarter longer than Princeton to take control. Eric Davis ran for 90 yards and two scores for the Thunderhawks, while teammate Josh Thornhill ran for 95 yards and scored a touchdown. TJ Kathman connected with Charlie Kenrich for a 30-yard touchdown. Nathan Rosario rounded up 11 tackles for Lakota East (1-3), which hosts Fairfield on Friday.

HAMILTON 41, OAK HILLS 13: The Big Blue (2-2) have won two in a row. Hamilton scored 21 straight to take a commanding lead thanks to a mixture of offensive schemes, including short TD runs by Kaleb Johnson and Keyshawn Stephens, as well as a Quincy Simms Marshall to Malik Verdon scoring strike. Simms Marshall and Verdon connected again later in the contest that was all offense. Stephens rushed for 194 yards and two scores, while Johnson had 115 yards rushing and two scores. Dillon Lee wrapped up 11 tackles for Hamilton, which hosts unbeaten Mason on Friday.

COLERAIN 42, MIDDLETOWN 6: The Middies couldn’t get momentum in their Greater Miami Conference loss against the Cardinals. Middletown, which slipped to 0-3 on the season, travels to Princeton next Friday.

MADISON 30, CARLISLE 20: The Mohawks have won two in a row. Madison will get back to action at Northridge next Friday.

NEW MIAMI 14, ST. BERNARD 8: The Vikings move to 2-0 on the season with their win on Senior Night. Trey Robinette connected with Jordan Robinette for an 8-yard touchdown pass on fourth down in the first half. Trey Robinette added a 23-yard touchdown run deep in the third quarter to give the Vikings the lead it would keep. New Miami gets back to action at Cincinnati Country Day next Friday. Photos by Jordan Phillips Photography

BROOKVILLE 28, MONROE 3: The Hornets couldn’t get enough offense going in a loss against their Southwestern Buckeye League rivals on Friday. The Hornets slipped to 1-3 on the season, while the Blue Devils move to 4-0. Gallery by AJ Fullam of 6SPhoto.com

Ross at Harrison on Saturday.