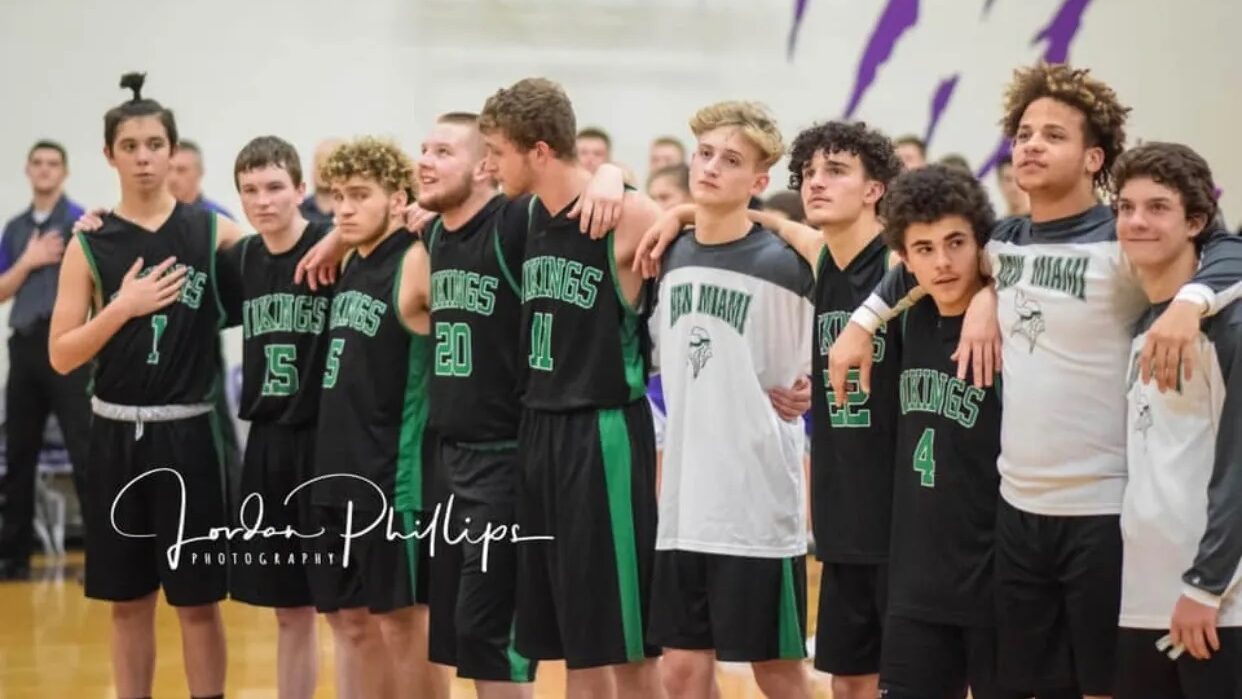 He had seen this once before, but from a different perspective.

In fact, the 16-9 Vikings are playing their best basketball since 2003, when New Miami had its last winning record and trip to a district final contest at University of Dayton Arena.

Who was at the helm that season?

“I was there the last time we did this,” said Lakes, current assistant coach who was the head coach of the Vikings for a five-year span from 2000 to 2005. “There’s just something special about this. We don’t see this often. We have to work hard for things like this from where we come from.

“I really don’t know how to describe it,” Lakes added with an emotional tone on Saturday. “We deserve this, the kids deserve this and certainly the New Miami community deserves this.”

INSPIRATION FROM THE PAST

New Miami players received a pregame pep talk from some credible sources prior to the Vikings’ bout with Gamble Montessori.

Assistant coach Thomas Roberts mentioned having some of the players from the 2002-2003 season come into the locker room beforehand to chat with the current squad — a young-laden squad at that.

It was an idea Vikings coach Jared Lee liked.

“Coach Lee was all about it,” Lakes said. “We’ve got to put into perspective that these kids are still young. We’ve got to do the best we can to keep their anxiety level at a minimum. So we brought guys from the sectional champion run we had.”

“Those guys were in this situation before. Those guys were the ones who had to get these kids to understand what they needed to do out there,” Lakes said. “They were able to encourage our guys and to tell them to not think about the game of basketball too much and to just play ball.

“We don’t have a lot of groups of kids who have played on this stage,” Lakes added. “There aren’t a lot of rapports on stuff like this around here. They were the ones to help lower our kids’ anxiety levels. And they got that message across.”

Continued Lee, “One of our goals was to play at UD Arena this year. So it’s a heck of an advantage to have those guys do what they did.

“It also certainly helps to have that guy right next to us,” Lee noted about Lakes. “They’ve been in this situation before.”

In the waning moments on Saturday, Robinette put the finishing touch on a situation none of the current New Miami players had ever been in.

There wasn’t one thing that needed to happen for the Vikings to pull off an upset victory over Gamble Montessori in the sectional finals.

“We needed a lot to go right for that in-bounds play to work, and it did,” Lee said.

The play was scripted how it panned out. The one particular part that needed to go right did.

“Coach called a timeout and we basically just drew up a play right there,” Robinette said. “They got me the ball. I was looking to get a foul on the way up, but they didn’t call it. So I had to score, and we won.”

The Vikings had to go the entire distance of the court in order for them to have an opportunity to head to Friday’s district final.

“I didn’t pass it or shoot it,” Lee said of the play that was instantaneously drawn up during the timeout. “This is what makes coaching fun. When you’ve got some guys who know what they’re doing and can play, it makes coaching a whole heck of a lot of fun.”

New Miami senior Ronnie Bowman was in charge of the in-bounds pass with 6.3 seconds left and the Vikings down 47-46.

Senior David Cunningham was moving near half-court behind his defender, out of sight, before Bowman threw the in-bounds pass into play. Cunningham’s defender looked in the opposite direction, and that’s when Cunningham bolted toward Bowman to receive a bounce pass.

Cunningham didn’t hold the ball for more than a second, sending a quick, touch-pass that he lobbed over to a bolting Robinette who was being double-teamed. Robinette had a step on both of his defenders. Gamble’s Jarren Deloach tipped Cunningham’s lob-pass directly into Robinette’s streaking path.

That’s when the sophomore guard scooped it up near the 3-point line and darted towards the hoop. Robinette went up for a shot that was highly contested by a body bump from Gamble’s Michael McCants.

The ball hung on the rim before falling through, sending New Miami into its first district final in 17 years.

“Coach Lee drew up that play,” Lakes said. “Every piece had to work for us to get there.

“He’s pushed all the right buttons in running this team with his vision,” Lakes added of Lee. “The players and the entire New Miami community is on our side right now, and we’ve got to continue to give them a show.”