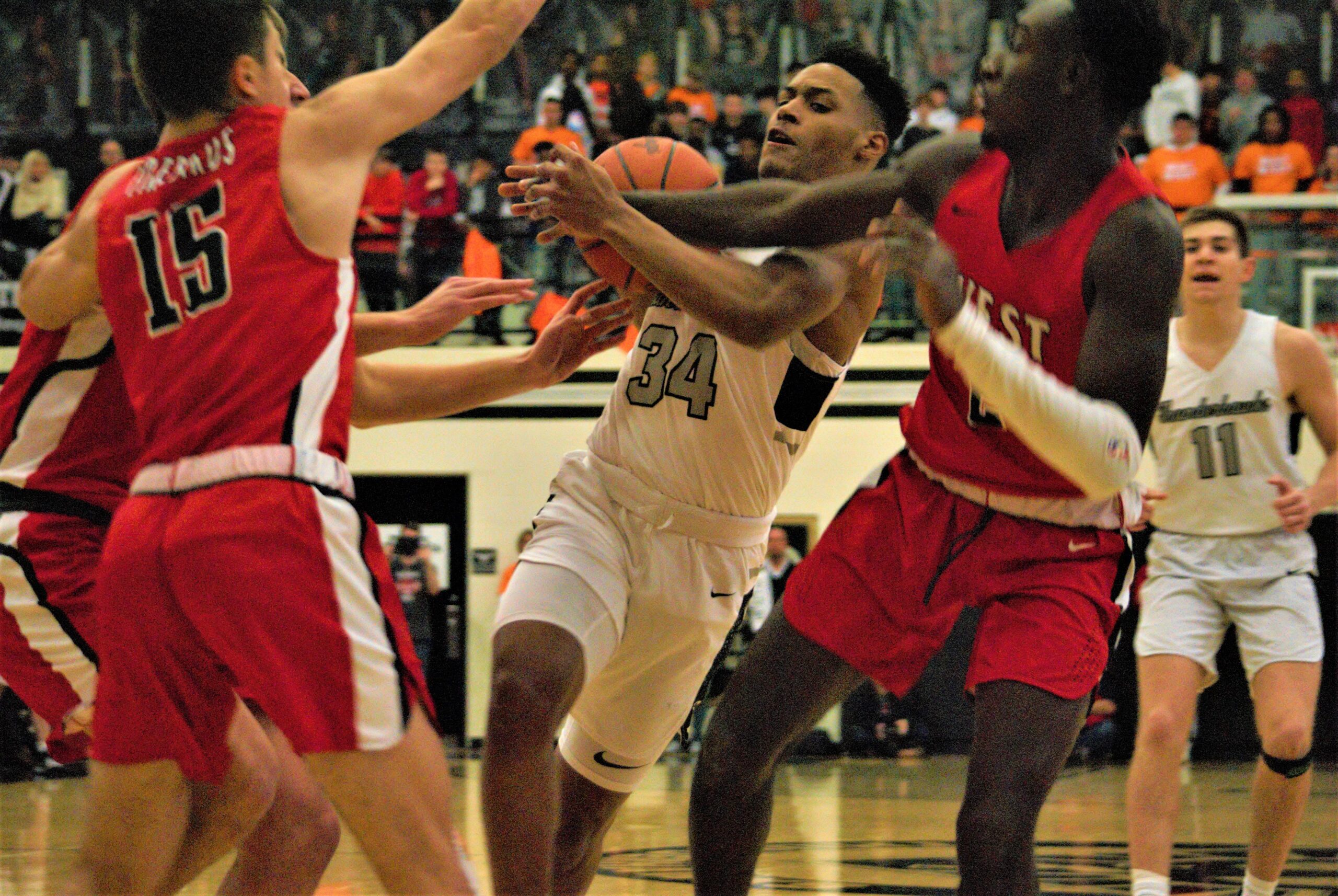 No. 2 seed LAKOTA EAST (18-2) plays No. 27 Kings (5-15) Saturday, Feb. 22 at 5 p.m. at Lakota West. The Thunderhawks are the hottest team in the area. No questions asked. All-purpose junior Nate Johnson is a playmaker who will continue to provide Lakota East with the firepower it needs to get back to the regional semifinals at Xavier University. Don’t forget about names like Kaden Fuhrmann and Alex Mangold, who can provide some grunt work inside the paint.

No. 22 MIDDLETOWN (6-14) plays the Oak Hills-Sycamore winner on Tuesday, Feb. 25 at 6 p.m. at Lakota West. The Middies haven’t been able to find a rhythm as of late, losing their last 5 contests. Junior Johrdon Mumford buckets 12 points a game for Middletown.

No. 8 HAMILTON (14-6) plays the No. 18 seed and rival FAIRFIELD (7-13) on Friday. Feb. 21 at 6 p.m. at Lakota West. Big Blue has won 6 out of their last 7 contests. Trey Robinson and Jackson Lewis continue to provide Hamilton a spark. The Indians are 2-6 in their last 8 games. Senior Zavian Ricks and rising star Deshawne Crim, a freshman, has been the go-to guys for Fairfield. The Indians face the Big Blue in the second of their regular season GMC battles on Tuesday at Fairfield. Hamilton fell to Fairfield 56-53 back on Jan. 7 at the Hamilton Athletic Center.

No. 15 EDGEWOOD (15-5) plays No. 20 Harrison (10-10) on Saturday, Feb. 22 at 6:30 p.m. at Hamilton. The Cougars are 11-2 since the New Year, including a couple of buzzer-beater wins against some quality teams. Studs Caleb Allen and John Shepherd give Edgewood an opportunity to make a decent run in Division I tourney play.

“All you can ask for as a coach is for your guys to get better and better every day. And I think that’s what we’ve done,” Talawanda first-year coach Jake Turner said following the draw on Sunday. “We’ve lost a couple of close ones and we’ve also got smacked in the face in a couple of games too.

“It’s unbelievable at how much better we’ve gotten since Day 1,” Turner added. “We’ve had our bumps in the road, but that’s part of life and how you react to it. And we’ve reacted pretty well to it.”

“This win was huge for us. It was important,” Badin coach Gerry Weisgerber said on Saturday. “This helps us prepare. We’ve gone up against some top-notch caliber teams that will prepare us for the tournament.”

“Our effort will always be a constant positive for us,” Ross coach David Lane said after his Rams’ loss to Badin on Saturday. “The tournament is a one-game season, so if you don’t come out ready to go, you go home. So it’s tough from here on out.”

No. 12 MONROE (13-7) plays No. 11 Taylor on Saturday, Feb. 22 at 3 p.m. at Mason. The Hornets have won 6 out of their last 7 games. And they have a big-time tourney-like test coming up at Ross on Tuesday night. Sam Jeffers leads the way for the Hornets, who have been rather successful under first-year coach Aaron Horne.

No. 3 MADISON (18-2) plays No. 22 Houston (3-17) on Friday, Feb. 21 at 6 p.m. at Northmont. The Mohawks are rolling on all cylinders, winning 8 in a row. Madison is coming in as the best Southwestern Buckeye League program, and senior Grant Whisman has a lot to do with that. The senior forward is scorching his way through the Mohawks record books, averaging a whopping

No. 1 CINCINNATI CHRISTIAN (15-5) plays No. 13 SCPA (3-12) on Saturday, Feb. 22 at 2:30 p.m. at Taylor. The Cougars have won 10 in a row. And they’re sitting prime position for a shot at a share of the Miami Valley Conference Scarlet Division title if they take down CHCA at home on Friday. Having last year’s transfer KJ Swain for a full season, as well as the addition of Kai Vance inside, has paved the way for the Cougars. Those two, along with sophomore Logan Woods, senior Cameron Rogers and junior Devon McKinnon make for a solid starting five.

“We like where we’re at right now,” CCS coach Carl Woods said following the draw on Sunday. “We’re playing a lot more cohesive as a unit since the start of the season.”

No. 2 NEW MIAMI (15-5) plays No. 11 Felicity-Franklin (4-15) on Saturday, Feb. 22 at 4 p.m. at Taylor. The Vikings have won 5 out of their last 6 contests. New Miami is looking to bounce back from a 74-64 loss to Cincinnati Country Day on Friday. That likely won’t be a problem with the junior guard combo of Deanza Duncan, Trey Robinette and Jordan Robinette, who are all picking apart the New Miami record books.

“We need to spend the next couple of weeks focusing on ourselves and making sure we’re doing what we need to do to get ready,” Vikings coach Jared Lee said following the draw on Sunday. “We’re going to continue to build on the high emotions that the season brings and focus on the things that make us a good team.”