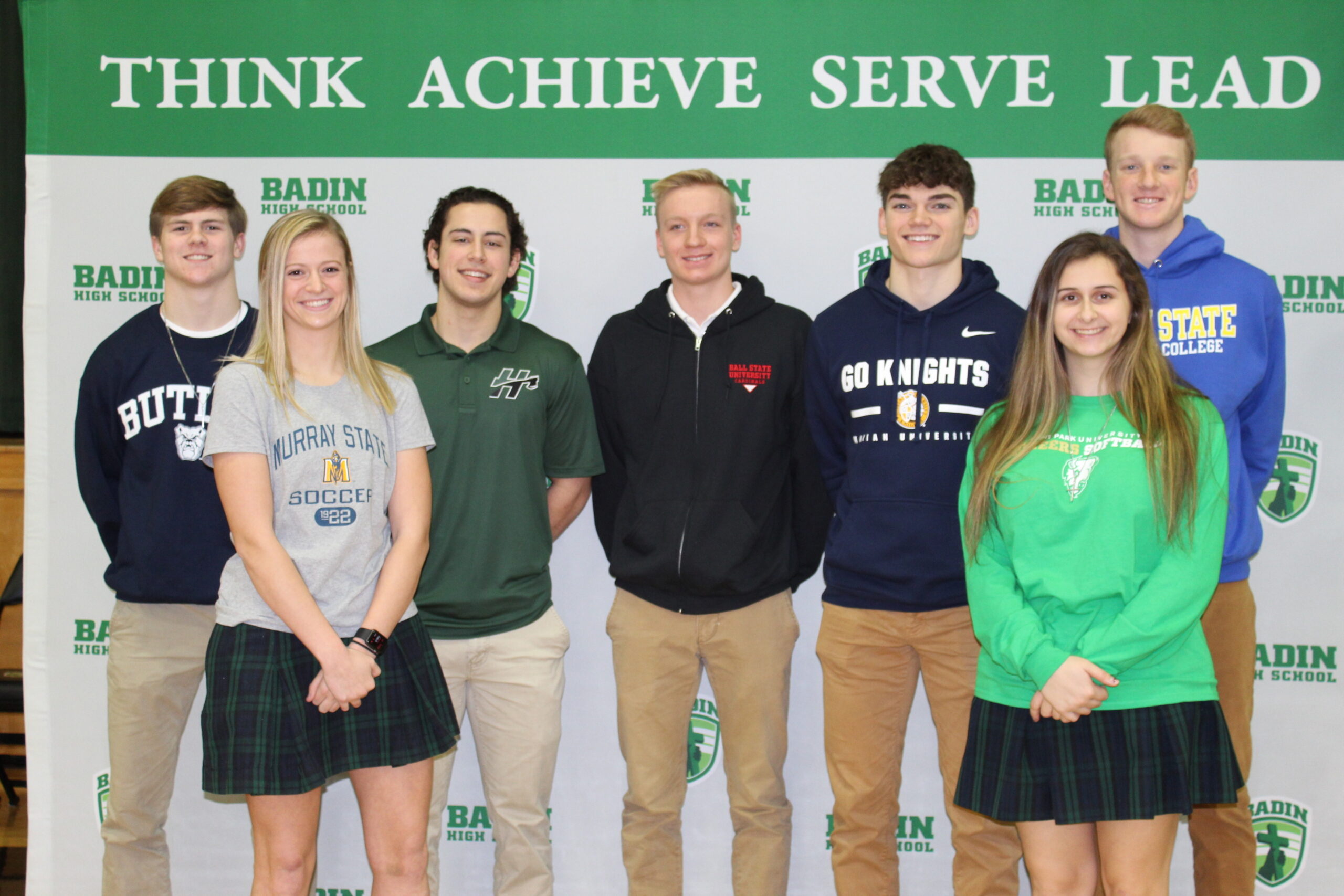 HAMILTON — Seven outstanding Badin High School student-athletes were honored today as they signed their commitments to play college sports during a recognition ceremony in Mulcahey Gym.

Two inked Division I letters of intent, while two more will play football, two will play baseball and one is headed to the women’s softball ranks.

“Badin High School student-athletes are sought-after at the next level,” Badin Athletic Director Geoff Melzer said. “These students have excellent skills, but they also understand the value of effort and commitment. They’ve been dedicated to their sport for many years, and they are well aware of the expectations that come with playing in college. We are certainly confident that they will meet those expectations.”

The seven student-athletes and their destinations include:

Dylan Ballauer will play baseball and major in Sports and Exercise Science at Huntington University in Huntington, Ind. Dylan is the son of Pete and Beth Ballauer of Hamilton and a graduate of Ross Middle School.

Alex DeLong will play football and major in Biology at Butler University in Indianapolis. Alex is the son of Craig and Sarah DeLong of Fairfield Township and a graduate of Edgewood Junior High.

Marshall Flaig will play football and major in Business at Marian University in Indianapolis. Marshall is the son of Tony and Christe Flaig of Hamilton and a graduate of St. Peter in Chains School.

Kelly Havens will play Division I women’s soccer and major in Exercise Science in a pre-Physical Therapy program at Murray State University in Murray, Ky. Kelly is the daughter of Josh and Lana Havens of Cincinnati and a graduate of St. Peter and Paul Academy in Reading.

Preston Heintzman will play baseball and major in Education at Edison State Community College in Piqua, Ohio. He is the son of Robert and Tina Heitzman of Liberty Township and a graduate of Lakota Plains Junior High.

Sydney Rawlings will play softball and major in Forensic Science at Point Park University in Pittsburgh. Sydney is the daughter of Russell and Rene Rawlings of Hamilton and a graduate of St. Peter in Chains School.

Adam Sherman will swim in the D-1 ranks and major in Criminal Justice at Ball State University in Muncie, Ind. He is the son of Ross and Melanie Sherman of Hamilton and was Home Schooled before attending Badin.

As a junior, Havens had committed to Lynn University in Boca Raton, Fla., but when Lynn’s head coach departed the school in the off-season, Havens re-opened her recruitment and was rewarded when Murray State came calling.

Havens was a first-team Greater Catholic League defender two years in a row, played in the Southwest Ohio senior all-star game, and has a lengthy successful club soccer background.

“Kelly really helped make my first year as the head coach go smoothly,” said Badin head coach Joe Martin, whose Rams won a dozen games and were a Division II district runner-up. “She works hard, takes the game seriously, and was someone you could count on every night to bring her ‘A’ game to the field. Murray State has signed a winner.”

Havens also became the first girl to score points in the history of the Badin High football program when she kicked a 27-yard field goal during a 31-7 Homecoming Night triumph over Roger Bacon on Sept. 20, 2019.

Adam Sherman will take his skills to the Ball State University pool in Muncie, Ind., as a member of the Cardinals D-1 swimming program in the Mid-American Conference.

Sherman finished third in Ohio high school Division II in the 100 breaststroke at the state meet in Canton in 2019, and has been a first team GCL selection in that event for three years in a row. He’s also been first team all-league in the 200 medley relay for two years running for Coach Emily Muroski’s Rams, and is a standout club swimmer as well.

Football players Alex DeLong (Butler University) and Marshall Flaig (Marian University) will play on in college after playing major roles in Badin’s outstanding 2019 season, as the Rams finished 9-4 for head coach Nick Yordy after an 0-2 start. Badin reached the Division III regional finals for the first time since 2013 before bowing to eventual state champion Trotwood Madison.

DeLong set the Badin record as the leading single-season rusher in the history of the program with 1,513 yards, and Flaig was a two-way standout at receiver and defensive back. Both were first team all-GCL selections and, interestingly, will be playing their college football at different colleges in the same city when they arrive in Indianapolis as freshmen.

Baseball players Dylan Ballauer (Huntington (Ind.) University) and Preston Heintzman (Edison State Community College) are expected to play major roles as seniors for head coach Brion Treadway after being part of a baseball team that went 27-3 in 2019, won 20 games in a row, and finished as a Division I district runner-up.

Ballauer was the starting catcher and Heintzman a solid pitcher who comes by it honestly – his older brother, Logan, pitches at Campbell University in Buies Creek, N.C.

Sydney Rawlings (Point Park University) is yet another talented player to come out of the high-profile softball program of veteran head coach Greg Stitzel. The hard-hitting infielder has been first team all-GCL for two years in a row. Last year she batted .410 with five doubles and 20 runs batted in.

It’s “all in the family” for Rawlings as well, as her older sister, Nicole, pitches at Ursuline College in suburban Cleveland.

“This is yet another outstanding group of student-athletes,” Badin’s Melzer said. “You can’t take it for granted because moving on to the college ranks is easier said than done. But Badin athletes have a ‘want-to’ – a ‘want to’ to perform, to succeed, to get better and to be ready for the next level. In that sense, we are never surprised when Badin athletes move on because they have what it takes.”